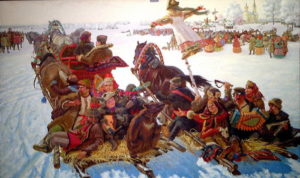 Russians are well-known for going all out when it comes to celebrating holidays. From the International Woman’s Day, commemoration of Victory Day, to the Labor Day. Russians simply know how to throw a celebration or commemoration of every occasion. Another popular holiday in Russia is Maslenitsa.

It is originally a pagan holiday, but as time went by, it has also gained recognition from Russian Orthodox Church. In fact, it has been the only festival of its kind  recognised by the church. Today, we are bringing you on the adventure to discover bizarre Maslenitsa traditions in Russia. Some other did make it to the modern days, while some others have to be left in the past.

So, what is Maslenitsa? The original idea of Maslenitsa is celebrating the end of winter. Because of that, Russians have been celebrating Maslenitsa very festively. Colorful decorations on streets across the nation, complemented by fun activities are just the perfect combination you will find in Russia during Maslenitsa. But, little did you know, there were some bizarre Maslenitsa traditions in Russia that would make your jaw drop.

The first bizarre Maslenitsa traditions in Russia is the public nude ‘banya‘ of bathing celebrated by the residents of the Sverdlovsk Region (1.200 miles east to Moscow). Back in the day, the people there would strip naked, go out on the street and imitate the movements people made during banya, while singing ditties. The movements used to be a parody of the purification ritual from bad luck. Until today, the tradition is still practiced in the region.

2. Bring out all the pancakes (and put them on my hair)

Now let’s travel to the north of Moscow, 280 miles away, to the Vologda Region to be exact. Until the mid 19th century, young ladies residing in the region would braid pancake into their plaits. They believed the customs would rid them of bad luck. But, there is also a romantic bit to the traditions. People in Vologda believed that the display of skill would also help the young ladies to attract suitors. In some other villages around the area, people toned down the custom a little. They would only put pancakes to decorate the Kokoshnik, the traditional headdress worn by Russian women.

This is another bizarre Maslenitsa tradition is Russia that involved singles. Back in the day, young men and women who did not get married the preceding year would get some kind of a punishment during Maslenitsa. They used to wear something heavy, like a piece of wood hanging from their necks or tied to their legs. Do you know how long they had to carry the weight with them? The whole one week of Maslenitsa. They would be able to get rid of the punishment by paying some amount of money or offer the people some Maslenitsa treats. Looking at the brighter side, this might have been great for single people to find their significant others back then.

Single people were not the only ones practicing bizarre Maslenitsa traditions in Russia. The newlyweds also used to compete to show their affections towards each other in public. Back then, young couples would stand in front of their gates and kiss in public. Otherwise, they would be showered with or buried in snow. What you might find shocking is that sometimes the village or city councils would arrange a kissing fest – yes, yes, you read it right. During the kissing fest, the villagers could come into the newlyweds’ houses and kiss either the husband or wife. Imagine the amount of law suit people would have filed if this tradition had made it until today.

The last day of Maslenitsa is when everything culminates. On the last day of the glorious week, people would burn some Maslenitsa effigy or dolls. People in Russia still carry out this custom until today. As a matter of fact, there seems to be an unspoken race of building the most unique effigies. The doll burning ritual is carried out as a symbol of farewell to the cold winter day. It also signifies the welcoming of spring and warmth.

While most parts of the country practice the ritual just like this, some other parts of Russia decide to put in a twist. In some area, people would put the effigy in a special box that imitates a coffin. People then would bring the mock coffin and body around the village. Being one that always pays attention to the minute details, there would also be a priest (usually a woman who wears mock beard) along with a group of mourners, encouraging everyone to cry. Of course, the funeral entourage are not real as well.

Which of the bizarre Maslenitsa traditions in Russia do you think is the weirdest?

By the way, we have also shared other Russian holidays and how they are celebrated. Interested in finding out the etiquette in Russian culture instead? Check out the rule of giving flower in Russia, the do’s and don’ts with numbers, and many others on the category.

Until next time, Russian Language Learners!