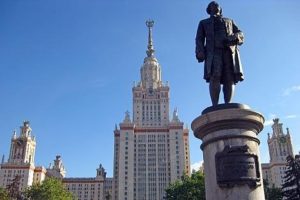 Besides being popular from having rich culture, Russian cities are also a great choice for students to pursue their studies. In fact, four Russian cities are among QS Student Cities Report 2017’s Top 100. Take a look at our list to see which cities are considered Russian student-friendly cities and why they ranked impressively in the report.

Moscow, the nation’s cosmopolitan capital ranked 39th of the 100 best cities surveyed. The interesting fact is that, Moscow is just the city of superlatives. The most populous city in Europe and the site’s of Europe’s tallest building are only some of the attributes of the city. Student life is indeed unlikely to be boring in the city. From exquisite art galleries to historic palaces, there are always more to discover from & experience in the city.

While rumoured to be an expensive city to live in, it is not entirely true. In fact, in the report’s affordability category, Moscow is listed on the top 50 cities list. The cost of a quality education even falls in the mid-range (circa US$4,700 a year). Daily living cost in the city is also considerably affordable for a city as metropolitan as Moscow.

When it comes to employer activities, this capital city of Russia also achieves a high score. As a matter of fact, local and international employers regard the local graduates very highly. As a matter of fact, the city houses Russia’s highest-ranking university: Lomonosov Moscow State University.

Coming up next as one of Russian student-friendly cities, is Russia’s second biggest city, St. Petersburg. This city has borne witness to 300 years of monumental political and social changes. It has, indeed, become the home to many notable events and highly distinguished figures.

One would find themselves amazed with the rich and highly cultural city. There are just so many historical yet picturesque sites around St. Petersburg. For example, visitors can pay a visit to The Winter Palace, which was the official residence of Russian monarchs from 1732 to 1917. We can also find one of the world’s largest museum, the Hermitage Museum. Still not enough? Travel around St. Petersburg and indulge in the beauty of their beautiful churches, from Church of the Saviour on Blood to the splendid Kazan Cathedral.

When it comes to affordability, St. Petersburg ranked very impressively. The low tuition fees complemented by fairly affordable living costs allow land the city in the Top 10 of the Best Student Cities index for affordability. In case you are wondering, St. Petersburg also houses one of the nation’s oldest, largest and at the same time prestigious universities: St. Petersburg State University.

Fun fact: if you enjoy ballet and opera, this city is just perfect for you. Visitors, locals, and students alike are more than able to indulge themselves in rich cultural shows at the historic Mariinsky Theatre. Also spend some times to experience their lively nightlife.

We have all heard of Russia’s impressive achievements in terms of technology and scientific findings. It is only fitting to include the city as of one Russian student-friendly cities as Tomsk is where all the magic takes place. Housing numerous universities and scientific research centers,  the city is considered one of Russia’s major centers for technology and of course, science. To honour the vast contribution the city has made in both sectors, it is nicknamed the “Syberian Athen”.

In addition to being one of Russian student-friendly cities, Tomsk is also one of the country’s major industrial center. We can find 6 renowned business incubators, side to side with the region’s most impressive companies in engineering, pharmacy, as well as food.

Just like St. Petersburg, living in Tomsk is also considerably affordable for students. In fact, Tomsk is also under the report’s top 10 most affordable student cities. During spare time, students can find a lot of outdoor activities to do as well as numerous picturesque museums to visit.

Always hungry for scientific and technology development, Russia can not have enough cities brewing cutting edge science and technology. Home to around 1.4 million residents, Novorsibirk is also the country’s third most populous city. Another impressive fact is Novorsibirk is also one of Russia’s fastest-growing cities. Other remarkable attributes bestowed to the city include the heart of culture and economic of Siberia, and also a transport hub for the region.

Founded in 1893, Novorsibirk’s architecture is just beyond impressive. We will come across remarkable Tsar-era buildings as well as countless wooden-lace architecture around the city. It is also one of the best places to enjoy Russia’s rich culture to the fullest. The Novosibirsk Ballet and Opera Theatre is one of the popular places to visit. Of course, having been considered Russia’s scientific center, science lovers can also indulge themselves in great amount of science while sightseeing. The Novorsibirk Zoo, which is a world-class scientific institute, is also a great site for tourists.

In terms of affordability, Novosibirsk offers affordable tuition fees and living costs. What is more interesting is that, students can also study in English in some institutions here. Also, Novosibirsk State University is one of Russia’s most respected universities. We can find the institute in the distinguished and highly-praised research center of Akademgorodok which translates into the ‘Academic Town’.

If you are interested in studying in Russia, you might want to learn some of the nation’s etiquette. From flower gifting traditions, the significance of bread in Russian culture, to the best time to visit Russia. You can also sharpen you Russian language skills by learning some Russian slangs as well as some grammatical rules.