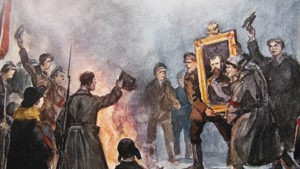 Russian is a country with a lot of tradition, custom, and history. Talking about history, you may have read about bread, Easter egg, tradition of New Year tradition, Christmas tradition in Russia, and a lot of others. Now, we will talk about one of the biggest movement in history of Russia, called as Bread Riots. Why called as bread riots? The focus of the words is Bread and Riots.

When we talk about bread riots, we also talk about revolution in Russia. Why? It is because the bread riots also write the history of Russia. It is a memorable by the people of Russian and world as the revolution and movement, and after you read this article, you may not probably forget. You may also hope it wouldn’t happen in the future day.

Let’s begin; the story is a revolution, protest, which led by the worker to protest the government toward the food shortages. Some of them shouted and complaint to the police that they have not eat bread for days. But, there is another story behind the Bread Riots you must know about. So, here, some stories about Bread Riots in Russia;

Bread riots actually are a series of riots and strikes in a protest to the imperial government in that time. Coincidentally, the protest which started on 8 March 1917 or Thursday, 23 February 1917 Old Style (Mar. 8, according to New Style and Feb. 23 according to Old Style) is national woman’s day. Then, some people called as the women’s strike of 1917. Another called as February Revolution Begins In Russia.

The protest had occurred in a week and was in the Petrograd (modern St. Petersburg). It happened when the government was ruled by Tsar Nicholas II. Tsar Nicholas II is mentioned as the last Russian Tsar had never been a wise ruler.

A lots of People Participating in Bread Riots

In one source mentions nearly 90.000 men and women. Another source mentions 75.000 workers in the end of day. And, also, there is a source mentions, the protest attracted the attention more than 100.000 demonstrators, who flooded the streets participating. Whatever the number, It is a huge number for people participating in a protest to government in one day.

In the next two days, the protest became a general strike. Why? Because the protest was succeed to attract more 400,000 demonstrators including students, educators and white-collar employees. In the end of the story, troops changed their side and joined to the demonstrators to force the government of Czar Nicholas to abdicate.

After the World War I, food became scarce among workers. It is become main reason why did happen protest of Bread Riots. Another reason, there is income gap between the rich and poor, and the Russian army’s losses their trust to Tsar Nicholas II due to the reputation for ineffective leadership. After that, they changed their side and force the government to abdicate.

Why Called as Bread Riots

Firstly, you need to know that the protest because the food shortages and scarcity of food. In that time, the police officers hear complaints of them that they have not eaten bread for two, three days or more. Also, they shouted that, they who were fortunate to buy the bread cry from joy.

The food shortages was not caused by the government, but it is more caused by the natural factor; the cold weather. In early February 1917, Russia was covered by frosts and blizzards. The condition disrupted the logistic distribution. As the impact, it making factories are closure and unemployment number is growing to increase. The rumors of food shortages were flying so fast. But actually, the Russian capital has enough flour to feed the city.

In literature, the story of Bread Riots began when female workers in convening the International Women’s Day instigated a bread riots. They protest to government to food shortages. Then it turned into a massive demonstration (a lot of people participating). The protest was in the Petrograd (modern St. Petersburg). They fought with police and refused to leave.

In the moment of International Women’s day

In the beginning, the female workers convened in the Petrograd (modern St. Petersburg) to mark the International Woman’s Day. They protest to food shortages with the theme as they called “bread and peace”. In the beginning, the protest began in peace and save. But, one day later, the next morning, it turned into violent. Why? Because the gathering were joined by hundreds of thousands of male workers, then started on strike and flooded the streets. And the outnumbered police were unable to control the crowds.

In short, the Bread Riots event happened on International Women’s Day on Mar. 8, according to New Style and Feb. 23 according to Old Style 1917. The bread riots also happened in the government of Tsar Nicholas II. A lot of people were participated in this event, including worker, educators, students, and white-collar employees.

The bread riots are an event, protest, and revolution. The main reason of the Bread Riots is food shortages or scarcity of food. The workers are haven’t eaten bread for days. By the military sides, they lose their trust to Tsar Nicholas II for his ineffective leadership.