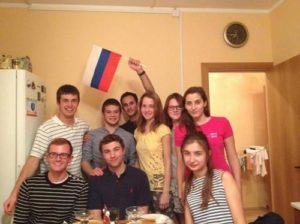 Russian is a huge country with specific culture that’s spead among Russians, be it in he Russian meal time etiquette, etiquette of dating Russian women, anything. In Russian Student-Friendly Cities, it’s not so hard to make friends. However, if you’re interested in making friends with Russian, then don’t hesitate.

Russians are very sociable, they would also make a very good friends for you. But, of course, just like how relationships are made after a phase of getting to know each other, friendship also works in a similar way. You can’t call someone a friend just after saying hi once to them, can you?

Friendship means knowing each other quite well and trying to know even more in the process. Friendship means you and the other person have the same intention of being acquaintance for one and another, and of course that requires effort and time. There are few things that you need to know of how to make friends with Russian that will probably help you a lot during the process.

How to Make Friends

First come first, Russians aren’t scary. They do love to make friends and become sociable whenever can. But, even though they’re opening up, you still need to know how to approach them the right way, don’t you? Making friends with foreigners is a great things, but it requires good understanding so that you wouldn’t come off as being rude to the other person. Here are few tips and tricks that you’ll find helpful while building friendship with Russian :

We all know that perhaps, in  a relationship, people just let loose and be themselves. People have fun and have a way to connect with one and another jokes in a certain way. But, if you’re trying to make friends with Russian, can you be reckless and forget all of the manners? Nah, that’s a big no. Not just with Russian though, you can’t be rude to someone you just met if you want to make friend with those person. Make sure you speak politely, especially if it’s someone a lot older than you. Don’t act reckless, make sure you can be yourself comfortable without acting rude and rash. That’s definitely not a good way to give someone first impression of you, isn’t it?

As you started to become close and keep approaching someone to  make friend with them, there might be a time when you need to visit him or her. At this time, you should never forget to bring something. In Russian, it’s considered rude for someone to come to other’s home empty handed. Russian will open their hands and welcome you into their home, but make sure you avoid being rude. It doesn’t have to be something too expensive and classy, though. You can simply bring snacks, dessert, chips, or anything depending on the circumstances. This can be a great way to give good impression to both your future friend and his or her family. It’s also a good etiquette to get acquainted with Russian people.

Even if manners matters, you can’t show up in front of someone talking in a way that you use while talking to your boss or colleague. Being friendly, bubbly, and most important, being yourself is still important to make friends. If you can’t even be comfortable with the other person, then how would you be able to get close to them in a friendly way? Remember that this doesn’t give you any right to be rude, but stay cheerful.

Russian won’t bother sugar coating something if it’s related to their friends. Well, friend should be just honest instead of saying fake compliment, right? If Russian say something abruptly to you, understand that it was meant to build you to become a better person. They wouldn’t do that to bring you down, instead, they’re trying to tell you their truth opinion that might be useful for you to consider. So, whenever they’re saying something that’s not what you expect or want to hear, learn to have a big heart to introspect and change to a better person.

Just like how Russian man should pay for his lady, Russian friends also should put trust into one and another. It’s not normal for Russian to ask their friend one by one how much they spend on their food before paying the bill. They should know it themselves and pay what they have to instead of being asked for. There might even be a chance when they’re not burdened to pay for you. Be wise with your money, but don’t be too stingy as it’s not something good when you’re in Russia.

Russian loves fun, party, and such excitement be it among family or friends. Being just formal and stuff won’t help you much to get closer to them. You can have a great time with them in a fun way, asking them to go to parties, host a party, pajamas party, for example. Ask them to do fun and different things that will excite them and make a good chance for you both to grow closer. This will get you away from boredom as well as filling your friendship with fun and great memories.

If you want to know how to make friend with Russian, then you gotta know this point. Friends help each other, at least that’s what Russian think. Be more understanding with what others are facing. That way, you’ll get a chance to help them when they really need it. This will let them know that you care for them and that you’re reliable. Don’t worry, they’re also willing to help you whenever you need them. Without hesitating, they’ll help you whether you ask for it or not.

Don’t get it wrong, of course this isn’t the same with the one that in the long list of how to make a Russian woman fall in love with you. Physical affection can really help you to bond with your friends stronger. Here, it can be hugging when you meet them somewhere. Russian would usually kiss their friends on their cheek for three times. You don’t need overwork on it, but a little connection would be a good thing. Physical affection can both show them that you want to get closer as friend and create a bigger chance to feel comfortable in opening up to each other.

It would be a great advantages if you have the same hobbies with your Russian friends. Sports, cooking, baking, make up, anything can be a good activies for both of you to do in the spare time. Just like how same interest can pull two people together in a relationship, the same hobbies can make both of you friends. You can teach each other as you both getting better at it. However, if you can’t really find the same interest, then spend your time to understand a bit of their hobbies, or even try to do it once or twice.

Making friends is not a hard thing, trust me. It’s all about getting out of your comfort zone and shake their hand with smile on your face. As a human, social creature, we clearly need to have friends. Friends help us to get through hardships, cheer with us when we’re on top, and always there when you need to have fun. However, it can also help you to get to know the culture of other country easier and more accurately.