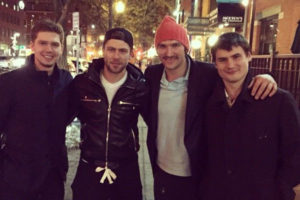 Russians are very sincere and straightforward in their feelings. They do not smile at strangers for the sake of being polite. They believe that smiles should be genuine. That’s why you won’t see them walking down the street, smiling from side to side. These smiles are only shared with their friends and families.

But on the other side, Russians are also open to the idea of making friends with anyone. Not just smiles, the greetings will change from handshakes to hugs or backslapping as well when you’re friends. Becoming friends with a Russian is not a high hurdle to overcome. So, what is the etiquette to get acquainted with Russian people? How different is it with other countries? This article will give you the general tips on how to become friends with Russians.

Below are the 4 etiquette to get acquainted with Russian people:

You cannot just go up to a random Russian and act like life-long best friends. It takes time to build relationships and every effort invested into it will matter. Russians often take their time to get to know someone and decided whether they are to be trusted or not. As such, if you truly wish to get acquainted with a Russian, you will have to put in dedication and work to gain their heart.

During the first several meetings, expect politeness and slight formality between the two of you. Handshakes as greetings, formal name addressing, etc. You cannot just jump in and make up a nickname immediately. By being polite, you are showcasing that you indeed wish to get to know them better and that you respect them. Depending on how much older or younger they are, the way you greet them can be different as well (read Etiquette to Greet Younger People in Russia and Etiquette to Greet Older People in Russia). Additional note, the sense of personal space for Russians can be slightly less than that of other countries. That’s why, during conversations, they might stand closer to you and this might seem like an intimate thing to do. However, it is simply customary traditions.

If you truly wish to be friends with a Russian, then you will have to be sincere about it. Russians are open with their feelings and opinions, and so you have to do the same as well. You have to show your emotions and feelings towards them; you have to be direct about what you feel, what you want, think or do. That way, they will be able to understand your feelings and know you better. When the mutual connection is formed, that is when the bond is strengthened. That’s why, do not be afraid to ask questions or tell anything in your mind. This will show that you are interested in knowing about them and also letting them know about you.

Besides those mentioned above, it is acceptable to show your weaknesses as well. You will be accepted as you are regardless of your flaws so do not fret about looking weak or shameful. However, that does not mean you should do things like bragging, shaming or insulting them (especially their family). They will accept your flaws and weaknesses but they will not tolerate bad behavior.

As mentioned before, Russians take time in placing their trust on others. If you want to get acquainted with a Russian, you will have to put forth significant efforts in winning them over. Like how most friendships in general are formed, you have to be a good listener and be interested in them. Even if their stories are long and messy, you need to show that you are someone who is willing to listen to what they say. Russians are also highly proud of their culture and achievements, so do not be afraid to show your interests in it. They will be happy to tell you more about the Russian culture, history, or even personal interests like literature or space exploration.

Other efforts you can put in are by spending more time with them. Although not all Russians drink, however, if by chance the both of you DO like to drink, then it is a great way to spend your time together. Even if the both of you aren’t into alcohols, you can still spend moments sharing long conversations with each others’ company.

The meaning of a friend and who can be defined as friends are important to Russians. They do not like to loosely call anyone as friends. Russians believe that friends are truly someone you can rely on and not just a term called for anyone you know a bit better than others. That’s why, when you get acquainted with a Russian, do not rush yourself and call them as a friend. This will be more offensive than anything.

Also, for Russians, friendship is not something you need to pronounce loudly. It is something that the both of you understood, even without it being said. For them, friends and family comes first, while rules will come second. It is their sense of obligation to do anything to help a friend or family in need. So if you want to get acquainted with a Russian, you have to understand the cultural differences and understanding in relationships.

Those are the 4 etiquette to get acquainted with Russian people. To summarize, do not loosely call them a friend. Invest your time and effort in the relationship and you will see a true friend who will help you when in need. Hopefully this article can help you gain a better understanding of the Russian culture. Other related articles regarding the Russian culture are Russian Handshake Etiquette, Most Likeable Things for Russian People, and Most Hated Things for Russian People.