Tea is a drink loved by many people. This drink can be enjoyed in various ways. If you like the taste of sweetness, you can add sugar into it. If you like it to be creamy, just put in some milk into your cup of tea. But if you do not like adding any of those, you can just enjoy the tea right away.

Nowadays you can find many kinds of tea in the market. There used to be only the classic black tea but now you can experience other types of tea. There is green tea which, based on research, named as the healthiest beverage in the world. The reason behind it is the fact that green tea contains antioxidants and nutrients that have great effects for your body. Not only that drinking green tea will improve the function of your brain, but it will also lower the risk of cancer and help you to lose some fats. There is also another tea popular for its health benefits called oolong.

The process of producing oolong tea that makes it different from black tea and green tea is the oxidation. During the oxidation, the color of the tea leaves will turn darker. Green tea is the result of a little bit of oxidation, black tea is oxidized until it turns black, while oolong tea is only partially oxidized. Just like green tea, consuming oolong tea is also good for you. It will help to boost your metabolism, lower the risk of developing type 2 of diabetes, as well as bring great benefits for your heart, brain, and bone.

Many countries have tea drinking as part of their cultures. England must be the first country crossing everybody’s mind when we talk about drinking tea. But England is not the only country where its people enjoy tea very much. Russia is another example of it and one of its famous tea is Russian Caravan.

How To Make “Russian Caravan”?

As a part of the Russian tea drinking tradition, there are some things we can learn about Russian Caravan

This tea is produced from Camellia sinensis, a species of a small tree which 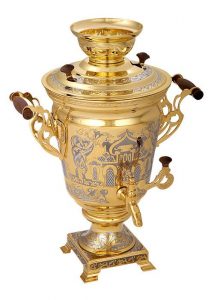 its leaves and leaf buds are commonly used to produce tea. This tree is native of East Asia, the Indian Subcontinent, and Southeast Asia. But nowadays you can find it all over the tropical and subtropical regions. When it came to Russia in the 18th century from the original tea producer area, the tea was transported using camel caravans. It took at least six months for those caravans to go through a six-thousand-mile journey to get to European Russia. This very long ride is what causes the taste of Russian Caravan.

By doing some transits in the tropical seas, there is some suffering in flavor that the tea must go through but then it will improve when the caravans go through the cold dry weather of Mongolia and Siberia. It is also believed by many Russian epicures that there is a taste of distinctive delicacy that can only be produced when the tea is unloaded at night and placed in steppes covered with snow. There was also some unscientific proof that showed the Russian Caravan got its smoky flavor from the campfires.

There are three kinds of tea that must be mixed in order to make Russian Caravan. They are oolong, keemun, and lapsang souchong. As mentioned above, oolong is the tea that its oxidation is somewhere between the green tea’s and the black tea’s. Keemun, one of the most popular Chinese black tea, is well known for its unique taste of stone fruit and slightly smoky. It is common to use this tea as a blend for classic teas not only in its native area but also in the west.

Lapsang souchong is different from other types of tea. Why? Because its leaves drying process uses smoke-dried technique instead of pinewood fires. That is why this tea has a distinctive smoky taste. The blend of these three types of tea makes Russian Caravan has a sweet, malty, and smoky flavor. If you want the one with less smokiness in it, worry not! There are some varieties available that do not include lapsang souchong in it so it definitely does not as smoky as the original variety.

If you want to make Russian Caravan tea in a traditional way, you can try this one. First, you need to prepare hot water. To boil the water, use a Samovar, a metal container that is traditionally used in Russia to heat and boil water. The boiling process is done in the chamber part. At the top of the container, there is a pipe to put solid fuel or coal into to heat the water.

You can find the modern version now that has some electrical element so you do not need to use coal anymore. Right at the top of the pipe is where you place a teapot to brew the Russian Caravan. You can brew this tea for hours until it reaches the consistency of syrup. After that, add the hot water that has been heated in the chamber into the Russian Caravan “syrup” and there it is, traditional Russian Caravan, ready to serve!

For the next time you want to make the tea in a modern way, you can try this one. First of all, you need to rinse the pot with boiled water. Once it is ready, add fresh water into the pot. At this step, you are going to add the tea leaves. To create the best flavor, measure the number of teaspoons of tea leaves based on how many servings you want to make and add one teaspoon for the pot. But if you prefer a stronger flavor, do not hesitate to put in more tea leaves. You can pour the tea once it boiled into the cups and let it rest for 3-4 minutes to make the flavor emerge. Then, you can add milk, sugar, or even honey into it, whichever suitable for your taste.

There you go! Now you can make yourself a cup of Russian Caravan and enjoy the rich flavor of it 🙂