Every day in our lives, we cannot live without the role of the other things around us. For example, we need food as our primary needs. In order to fulfill this need, we have some options. We can cook or we can buy the food straight from our favorite restaurants. Both options have one common thing. Both need ingredients to make meals.

That simple correlation between farmers and consumers shows that each of us has an important role that will affect other people lives. The saying that “we cannot live without other people” is true. That is just one obvious case that shows relation and dependency between human being. What we must also remember, there are other living things (and non-living things) in our ecosystem. Since we all live together in an environment, the existence of other living and non-living things is important.

As mentioned above, each member of the ecosystem has its own role which makes each one of them is special. One of the creatures with a special role is Russian Honey Bees. From the name, it clearly comes from Russia, specifically from Primorsky Krai. Let’s find out more about it.

How Special Are Honey Bees of Russia?

The name of this particular bees shows that this species comes from Russia. Originally, it comes from one of Russia’s federal subjects called Primorsky Krai. This region is located in the far east part of Russia. Just like other living creatures, this insects has a Latin name which is Apis mellifera. Apis is the Latin word for bee and mellifera is the Latin word for honey-bearing.

On 1977, this insect got into the United States of America. There was a critical decline of bee population during that time which caused by the existence of parasitic mites in a large number.  This situation led to the decision of Honeybee Breeding, Genetics, and Physiology Laboratory, a research agency works under the United States Department of Agriculture, to import the Russian Honeybees. Ever since it was imported, Russian Honeybees have been used for breeding to make sure that this species continues to survive.

Why did the Honeybee Breeding, Genetics, and Physiology Laboratory decide to import the Russian Honeybee in particular in the first place? Turn out this species is inherently resistant to many kinds of parasitic mite. Russian Honeybee struggles in the existence of Varroa Mite, parasitic mites that use a honey bee colony to reproduce. But when Russian Honeybee is pressured at a certain level, this pressure will be an advantage for the bees in which they will exhibit vigorous behavior against mite in colony level. Research has also confirmed that in order to decrease the population of mite, they can make use of the Russian Honeybee and the hybrid of Russian-Italian bees. So far the Russian Honeybee’s strong resistance towards mite makes it pretty special right?

Before the Russian Honeybees were imported, there was already a famous 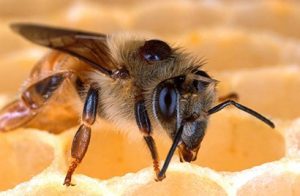 bee species in the United States called Italian Honey Bee. This particular species is very easy to recognize because of its bright yellow color. What makes it so special is the fact that it produces honey excellently and has a low tendency to swarm that makes it suitable for honey bee management. Italian Honeybee replaced the German Honeybee that had been in America for more than 200 years. Not only that Italian Honeybee is a great honey producer, but, at that time, it was also stronger in comparison with the German species which had the ill temperament, easily controlled by a disease, and did not suit with honey bee management.

As informed before, the Italian Honeybee was finally replaced by the Russia Honeybee because it was not strong enough to fight against mites, two of the deadly ones are the Tracheal Mite and the Varroa Mite. At first, the beekeeper used pesticide to control the mites but the use of such chemical in a large amount and in a long period of time only caused damage to the beeswax of the hive and to the honey. Another reason they stopped using the pesticide because eventually the mites became resistant with the pesticide and so it became ineffective. This is why the researcher was looking for a honeybee that is naturally resistant to those both deadly mites.

Luckily they found the Russian Honeybee. For 150 years, this insect has been exposed to Varroa Mites, a time that is much longer than any other honeybee. Seeing its resistance towards the Varroa Mites, the researchers concluded that Russian Honeybee must have developed its power to survive through the attack of the mites. This statement was also strengthened by the result of many research that showed that in comparison with any other honey bee, this particular species is twice stronger when it comes to defending themselves to the Varroa Mites. Not only that, but Russian Honeybee can also confront the Tracheal Mites, another intense mite that could not be resisted by the Italian Honeybee.

Now we know that Russian Honeybee is not only pest-resistance but also a good honey producer. This quality for sure proves how special they are!