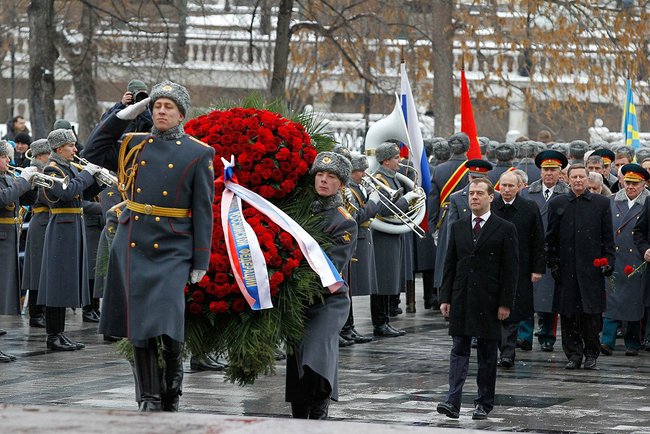 Russia has been known for its soldiers’ courage and heroism and it has also been an integral part of greatness and fortitude of the state. Russia had two military saints with a day of their own, namely Saint George, patron of Russia’s Army, whose day was celebrated on December 9th and Saint Andrew, patron of Russia’s Navy, whose day was celebrated on December 13th.

For several decades, Russian people have always been faithful to their tradition. Even today, they are willingly to meet the popularly and widely commemorated Defender of the Fatherland Day. It is a celebration day where Russian people celebrate solemnly and with great warmth. For many, it is a day of men who had been or are currently serving in the army or other security agencies. Historically, it was indeed meant primarily as a tribute to war veterans and servicemen. But, what does it really mean these days? Like most holidays, it now probably becomes an excuse to get drunk. Or, is it not?

The holiday has a rich and glorious history. It dates back to almost 100 years. It is a symbol of courage, dignity, and honor of many generations of Russia. From the glorious victories of the state to veterans of the great Patriotic war, and to all who defended the honor and dignity of the country during local conflicts, February 23rd is a holy day. It is all because the army had been serving enormous symbolic significance.

On Defender of the Fatherland Day, women are expected to tolerate the behavior of men in their lives. In fact, women are supposed to be nicer than usual and say some kind of encouraging words to all the important men they deem close, perhaps also giving presents. In conclusion, it has become Russian International Men’s Day or the odd counterpart to Women’s Day which Russian people celebrate on March 8th due to mandatory military service for all men. Though, in reality, one does not need to be a serviceman to celebrate the holiday, because all men would definitely stand up for their country when the time comes.

Defender of the Fatherland Day is celebrated on February 23rd. The legitimacy of the date chosen is disputed. It is the day of military glory which Russian armies won the battle. So, despite of the fact that Defender of the Fatherland Day has become Russian International Men’s Day to honor men with no exception, it means that the holiday itself still has a higher and deeper meaning to it, such as love of country and the great desire to defend the country even at the expense of everything.

How Do They Celebrate?

Technically, the celebration should be synonymous and private since it was initially meant to honor those who served in the armed forces. But, it is still fairly acceptable for foreigners to join in on the act and reap the benefits of the day. In fact, if you are in Russia, you will most likely be able to see a military-themed parade, communists pulling themselves together and walking down some main streets, children shouting slogans and waving banners. In addition, if you go to some nightclub during the celebration, you will find a lot of men enjoy their time together.

The Holiday on Former Soviet Republics

Defender of the Fatherland Day is celebrated not only in Russia, but also in other former Soviet Republics. Ukraine was one of them, but following the Maidan Revolution, the new government decided to ditch the holiday in an attempt to cut all socio-cultural ties with Soviet’s past. In spite of Ukrainian President’s order, the Donetsk and Lugansk People’s Republics and also the self-proclaimed independent regions in Eastern Ukraine still celebrate the holiday.

With the USSR (Union of Soviet Socialist Republics) prospering following World War II, the importance of Red Army Day which was renamed to Soviet Army and Navy Day in 1949 also grew. People started to treat it as a universal men’s holiday instead of military celebration, an opportunity to honor all men of the country.

In Russia, as a holiday of importance, February 23rd just could not collapse with the Soviet Union. It was only renamed to Defender of the Fatherland Day in 1995 to keep its place among similar military holidays. In the UK and US, the day is called as Remembrance Day. It is celebrated on November 11th, while Australia and New Zealand celebrate similar day called Anzac Day on April 25th. In Kyrgyzstan, as in most other former Soviet Republics, February 23rd is a national public holiday. Unlike in Russia, in Kyrgyzstan, the name of the holiday is Homeland Defender’s Day rather than the usual term Defender of the Fatherland Day.

In the capital city of Kyrgyzstan, there will be a big military parade on the celebration. However, it is not the only day to do with defending the homeland; because they have a separate holiday happened on May 29th to celebrate the Armed Forces of Kyrgyzstan. Nevertheless, the parade occurs every year and people continue to attend and celebrate. Most of the ex-Soviet countries have preserved the Soviet Army Day under different aliases, often opting to move it to a different date.  Each has their ways of celebrating contemporary military culture of which historical evidence still remained.

Even in Russia, the exuberant and massive displays of Soviet’s pride characteristic of Red Army Day celebrations have not changed much. There are still military-themed parades, parties, and other commemorations of military throughout the former Soviet Union. However, these days, in practice, women give men small gifts and extra attention, some people dress up in military garb, and many wives grant their husbands permission for a night out drinking with other men. At office, women typically give small gifts to their male colleagues. At school, little girls give presents to boys they are close with.