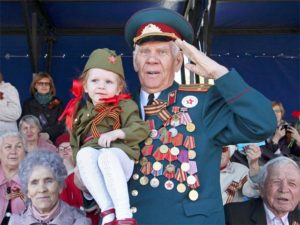 Victory Day is the most important holiday for Russian. Practically, all Russian families have relatives who died in the war defending his country. Russia’s victory over Germany in World War 2 has always been a pride for the Russians. For them, this victory is a testament to the homeland, sacrifice, and hard work of their grandparents. Right on May 9, 1945, Germany signed a declaration of defeat to the Soviets.

Therefore, every year Russian society always celebrates this victory on May 9th. On this date, in all parts of the world, the Russian people always celebrate with ceremonies and there are parades and fireworks throughout the city in Russia. Here some traditions of victory day in Russia. You may also read Why We Must Learn Russian Language

Like Indonesian, on the day of victory, Russian held flag ceremony. All the citizens of Belgorod town gathered in the square to see the parade and the celebration of the Day of Victory. Exactly at 10 am Moscow time, all cities in Russia and Russian embassies around the world begin their ceremonies by raising Russian flags and singing their national anthem. In Belgorod, after this ceremony, followed by dances, singing, and drama performances. Next, the parade begins. This parade was followed by all citizens whose grandfather or relatives came to fight in World War 2. They also bring a picture of their grandfather or relatives.

One of the most famous celebrations of Victory Day is the Victory Parade in Moscow. Every year, thousands of soldiers line up on Red Square’s “stone floor.” This parade became the showpiece of Russia’s latest military technology. In 2015 Armata tanks were first exhibited to the public. Attractions of the Russian army complete with war vehicles and fighter enliven this parade. Fighter aircraft fly in low altitude at this military parade. All Russians will witness the latest technology in the military on this day. Because of this technological parade, russian more loves their country. Read also about Easter Day in Russia

Military parades in Russia are always aired on national tv. This is done so that the military parade can be witnessed by all Russian society, including those who do not reside in moscow. This parade also became one of the cultural attractions in Russia. Many tourists come to see this military parade. Especially in May in Russia is spring.

Russian President Vladimir Putin attended the Victory Parade in the morning in downtown Moscow. Putin greeted the Russians directly. President Putin always attends the Russian victory parade. In fact he brought a picture of his grandfather as one of the historical figures of Russia.

Russian are fanatic to their President, Putin. On the day of Russia’s victory, Putin will be in the midst of Russian society. This becomes an interesting and memorable scene. In the morning, residents have traced the road to get a strategic place. Some even climbed up the tree, just to see the president. Read also History of Russian Language for your feed.

On the day of victory, almost the entire city has certain decorations that symbolize of victory day. Russian flags fluttered in the corners of the city. In addition, many residents who wear ribbon-colored Russian flag. Not only that, the men pinned Saint George’s ribbon on their chests. For Russia, the Saint George ribbon symbolizes the military. The women and children use Russian army caps. During the week, this hat is sold in the town square.

In the park near the square, there are people handing out free porridge to the citizens of the city. Porridge is a food that is often eaten by the Russian army during the war. This porridge is distributed free of charge to Russian citizens. The bazaar contains a lot of food other than porridge. In addition, many people are selling accessories that symbolize victory day of Russia. Not only food kiosks, many also sell homemade items. See also another traditions of Russia Christmas Traditions in Russia

This Victory Day celebration does not just stop. At night, exactly at 10 pm Moscow time across the city in Russia, you can see fireworks. This fireworks party lasts for almost 10 minutes and is very magnificent. The fireworks that are lit in the square are huge, so the whole city can see them wherever they are.

That’s some traditions of victory day in Russia. Russians greatly respect and appreciate the hard work of their ancestors. They are proud of their history. They celebrated Victory Day so festively. All the townspeople gather to celebrate an important day in their history. This great day is able to unite the entire society from the most diverse layers, groups and views. See also Labor Day as Spring Day in Russia