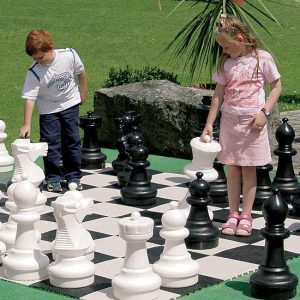 There are several playgrounds in St. Petersburg. Many of them are quite unusual for its unique design, that will be loved by many children. In some of them, the visitors may even be able to learn something from the decoration, and the game elements.

Here is the list of the most favourite playgrounds in St. Petersburg, Russia:

Located in a small courtyard on Zagorodny Avenue, 28, this playground resembles the huge chessboard in the movie “Alice in Wonderland”, with colourful base. Alongside the usual swings and slides, here you can find car dummies, where children can play, pretending to be a driver.  If you go there, please pay attention to the houses surrounding the courtyard, as you may find its multi-coloured glass windows with chess theme.

What’s really appealing about this playground is definitely the wooden frigate, replicating the Peter and Pavel Frigate, which in the inside you may find several levels. Going up to the upper deck can be done by climbing using a rope, while going down to the ground can be done using slides. This way, playing in this playground may give a whole new experience, as it different from the usual playgrounds.

Visiting this playground, you may see an enormous replica of a turnip in the center of the yard, created by one famous sculptor, Vladimir Aleksandrovich Trubakov. The “turnip” is in the form of a big yellow root with long green leaves. Attached to the “leaves” is actually slides as the game elements of the playground.

4. Playground in the Botanical Garden of Peter the Great

Being built to celebrate the 300th anniversary of the Botanical Garden, this modern playground’s construction was made with rubber coating, which is shock-absorbent. Aside from that, all the materials are safe and non-toxic. Here you may find so many playground’s usual rides, such as slides, swings, and seesaw. However, one thing you should always remember is to not walk on the lawn, as it is prohibited by the garden’s rule. This actually not only for preserving the flora, but it’s also for the safety of the children, as they may get lost if they walk pass the lawn.

The playground is located near to the Skandi Klubb Residential Complex on Aptekarsky Avenue. There are several playgrounds in all the complex’s courtyards where the rides are grouped and separated based on the age of the children who are suggested to play it. The playground offers usual playground rides, such as slides, swings, as well as trampolines and hammocks. All the elements in the playground are also made from safe and non-toxic materials, so parents would let their children play there at ease.

Just like the name, the design of the playground is replicating the historic site Peter and Paul Fortress, in the form of a castle with colourful slides and passages, which are really appealing to children. Aside from that, there are also slides attached to this playground. Other thing to be highlighted is that this playground is also made from safe and environmentally friendly materials which are non-toxic.

This is another unique playground that has the design of a pirate ship, which will definitely be loved by children. This playground offers several usual rides, such as swings, slides, seesaw, ropes, and ladder. Aside from that, there is also a table tennis in the playground. The wide variety of the game elements, as well as the one-of-a-kind design, makes it become one of the most favorite playgrounds in St. Petersburg, Russia.

There are actually two playgrounds on Kolomyazhsky Avenue, along with a stadium for playing basketball and volleyball, as well as the sports equipment. Here you may see the unique design of the playground which is made in aerospace style. For children who love the aviation as well as outer space world, this playground definitely should be in their must-visit list. There are also two recreation areas with benches for the elderly, so that this playground will not be appealing only for children, but it will also be interesting for adults or elderly.

This is another unique playground as the elements are lined with mosaics, create by the students of the Small Academy of Arts. There are arched passages and stairs, where children may explore then come up with the idea of adventurous games to be played with their peers. By playing in this kind of playground, children’s creativity will be more trained, as they will try to think and explore what games they would like to play and how to play it using minimum tools.

This interesting playground provides the game elements in the form of road patrol service’s attributes, such as motorcycles, cars, buses, and the figure of a police officer. In this playground, children may be able to learn traffic rules, as there are also various traffic signs, which children may see and understand what the meaning of each of the sign is, and what it is for.

This playground is located in the territory of Divo-Island, one of the most famous amusement parks. And because of that, you need to pay for the entrance ticket to go in. However, it will be worth it, as there are many interesting rides, such swings, loopholes, slides, climbing wall, as well as small rocking chairs. Aside from that, you may also see the clowns perform and entertain all the children visiting the playground, which is why it become, without a doubt, one of the most favorite playgrounds in St. Petersburg, Russia.