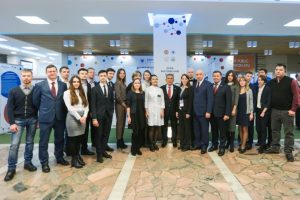 During the cold war era, Russia practically raced with the US to be the most technologically advanced on planet earth. This causes them to advance their technology, especially on nuclear and space technology. Nowadays there’s no such bitter rivalry anymore, Russia and the US and other countries work hand in hand on the space program.

With the importance of science in Russia, it’s no wonder they set aside one day every year to celebrate science. The day is called The Day of Science, and it falls every 8th of February. It is a celebration and an appreciation day for science and scientists in Russia. There are many interesting facts about this day, check it out!

1. It’s originated since the day of Peter The Great

So you’ve read that science started to be encouraged in Russia since the day of Tsar. Specifically, the significance of science in Russia is marked by a decree from Peter The Great dated from 8 February 1724. It’s the day when the Russian Academy of Sciences was ordered to be established by Peter The Great. The purpose is: to further the endeavor of science.

Every year, Russians mark February 8th as the day of appreciations for science and also the scientists. The scientists are seen as silent heroes who work diligently to solve the problems of Russia through science and technology. It is a day to applaud their hard-work and findings, while also encourages people to pursue science, especially young generations.

3. February and then April

However, there was some change during the Soviet Era. In Soviet days, Science Day was moved to another month. No longer celebrated on February 8th, the Soviet government ordered the day to be celebrated on the third Sunday in April. The reason being, this date was a day when Lenin created his “Sketch plan of scientific and technical work” in 1918.

Russians celebrate The Science Day back every February 8th starting from the year 1999 when a presidential decree is issued to bring the day back its original date. Another interesting fact, there’s another version of The Day of Science in Russia, on 28 January. Only this is a date back before Russia use today’s Georgian calendar. Like many other Russian holidays, such as the Epiphany Day, Russian holidays move 10 days more according to the new style.

4. Russia has many important scientists for the world

It is worth to note that Russia has produced many great scientists whom people celebrate on The Day of Science. Most notably are Mikhail Lomonosov, Dmitri Mendeleev, Ivan Pavlov, Andrei Tupolev, Nikolay Lobachevsky, and many more. Their contributions to science have not only benefited Russia but also the human race in general.

Mikhail Lomonosov, whom Moscow University is named after, is a scientist with expertise spanning across various fields, from astronomy to literature. Dmitri Mendeleev is regarded as the father of chemistry. If you studied chemistry at school, you’ll notice that his name often appeared here and there in many chemistry books. He’s the creator of periodic table!

Funnily enough, Rumor said it that Mendeleev is also the creator of much-loved Russian beverages vodka. The 40% of alcohol content in vodka is said to be his instruction. However, further investigation has proved that the claim is untrue.

How Russians celebrate the Day of Science? Well, they do what scientists like to do. Expect gatherings, exhibitions, conference, all sort of things. Universities hold exhibitions about their latest research and scientific advancement. It’s truly the day to honor scientists and their contribution to society.

So those are a little bit facts about Day of Science as a public holiday in Russia. If you happen to be in Russia around that date and you’re wondering what to do you can consider visiting museums of science in Russia.

There are plenty of science museums in Russia, almost in every big city. Among the most popular is the Museum of Cosmonautics in Moscow, Museum of the World Ocean in Kaliningrad, Museum of Optics, and Museum of Paleontology.

Museum of Cosmonautics in Moscow introduces its visitors to space technologies in Russia. Not only that, they equally showcase other countries achievement too. This is as close as you can get if your childhood dream is to be an astronaut. It’s fun to explore the museum and they also have English audio-guide. The museum building, who looks futuristic from outside, is a nice landmark to take a selfie with.

From the space to the sea, Museum of the World Ocean in Kaliningrad is for those who also a fan of submarines and other naval technology by Russia. You can see types of ships, vessels, submarines whether it is a replica or real. The area is huge and you’ll be amazed by their collections, even if you’re not a particular fan of sea transport.

You can also visit libraries in Russia and read books, especially Russian literature.