At holiday, Soviet children will be very enthusiastic about playing and having fun outdoors. They wander and explore the outdoors with classmates. Children adventure for days or even weeks in the summer. They will learn various survival skills, such as making a bonfire and reading maps. This activity will always be an exciting adventure even though it will not be exactly the same as the adventure stories of Jules Vernes and James Fenimore Cooper which are very popular among Soviet children.

During the trip, the Young Pioneers (usually consisting of schoolchildren aged 9 to 14 years, equivalent to the current Scout movement) will be guided by the Pioneer chairman who will explain various things. Starting from the history of the location they visited to how to find natural mineral substances. At night, the whole group will gather around the campfire while cooking. They enjoy a simple dinner. Their food is usually canned or mashed potatoes. Children eat dinner while singing accompanied by melodious guitar excerpts.

For the children who are old enough and can be trusted to use a knife, making small wooden statues is a fun activity. Calluses, swords, even slingshots can be made from tree branches. However, if it is difficult to find an appropriate branch, an old unused table or arm chair can be an alternative raw material.

After making slingshots, they usually used bottles or cans. Then they will hung its on the wall and make them as target to shots with small stones as bullets. While children are playing, parents will watch them carefully so that the stones don’t break the window or worse, hurt the child’s eyes.

While boys were busy cutting wood and destroying bottles, girls were playing French rope jumping. This is the most famous game in the Soviet era. The game involves three daughters and an elastic rope in the shape of a circle. Two players are guards who stand face to face inside a rope circle. They put it on their ankles and tensed it to form two parallel straight lines. The third player is the jumper who will jump over the rope whose increase the difficulty.

They slowly raised the rope height to the knees of the guards, then thighs, hips. If the jumper is great enough, they will raise the rope to the ear. If the jumper makes a mistake, he must switch places with one of the rope guards. 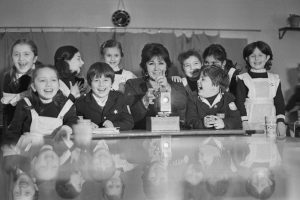 Most parents will immediately lead their sons and daughters to bed after the children’s television program Spokoynoy nochi, malyshi! (Good night, my baby!) Is over. However, parents allow older children to stay longer while reading books or watching filmstrip in the dark.

Film bands are a series of negative films. Each picture frame represents a different episode in a story, with pictures and text. They insert rolls of film tape into a special projector. This projector is somewhat different from ordinary film projectors. For screens, they hang white sheets on the walls or cabinets. While the projector they place on a stack of books. Then they put a roll of film tape into the projector, turn off the lights, and the story-shaped image appears. Mothers, fathers, or older children will read the image text aloud so that their siblings can understand the story while looking at the illustrations on the projection screen.

5. Enjoy the beauty of the carpet on the wall 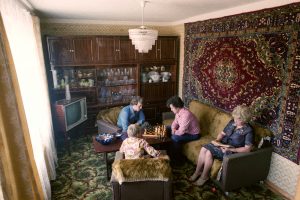 Those who do not have a film tape projector at home can look for other entertainment by observing the hanging carpet. Almost all apartments have this kind of carpet. The householder usually hung that carpet on a sofa or bed. The carpets have at least two functions. That is hiding the defects on the wall and as a silencer.

While trying to sleep at night, children will stare at the carpet and look for animal silhouettes, human face shapes, or plant patterns. Every child will see different things and try to show them to their brothers.

This of course often irritates parents because it is not easy to clean the stickers they consider damaging the scenery. Other objects that are usually collected by children are stamps, rare coins, and anything that can be exchanged with their playmates.

Chewing gum includes snacks that are very rare in the Soviet Union. At that time, only a few lucky children could get gum gifts from their parents after returning from abroad. They will chew this “fancy” candy for as long as possible until the sweetness disappears. Then, the children will dip it into jam or sugar to add flavor.

It may sound strange, but for those who are less fortunate and have no hope of chewing gum, the sap of tobacco from the roadside can actually “replace” the pleasure of gum. They chewed the sticky candy. The children blow it and inflate it. Children can also get tobacco sap from the roof of the house which is usually used as a leaking patch. The texture of the tobacco sap is hard, but it will soften after chewing long enough. However, chewing tobacco sap is not a good idea to do today.

Thats How Soviet Children Playing Activities Outside Home. Maybe it looks weird. But that ancient game really existed before like now. Actually children’s games around the world are almost the same. In Indonesia there is also a jump rope game, stamp collection, camping, and many others. There are also good Russian habits you should know.