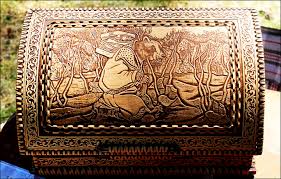 Souvenirs are one way to remind us of our travelling experience to certain places. While they are impressive to collect, they also can also act as a gift to give for loved ones. Siberia is identical with unrelenting cold and white snow. But when you look deeper through the area, there are small villages with local handicrafts that are worth to check. Especially ones that still maintain their thick cultural design. Souvenirs choices are personal preference, but there are 4 fascinating souvenirs from Siberia listed in this article commonly found.

Some region in Siberia that are rich in souvenirs are Altai Republic, Republics of Tuva and Khakassia, and Krasnoyarsk Territory. Altai Republic, especially the Kosh-Agachsky District, known for its varieties of herbs, honey, and shaman’s charms that attract a lot of tourists. Tuva and Khakassia known for its musical. Meanwhile the Krasnoyarsk Territory is one of the largest cities in Siberia with a major cultural center.

It is a loss to leave Siberia empty handed when travelling. So, to help you cherish your moments in Siberia here are 4 fascinating Siberian souvenirs as reminder of your wonderful experience and a gift for loved ones.

Many people are mistaking the name of Kazakh Rugs, thinking that they were originated from Kazakhstan. Kazakh Rugs are luxurious rugs that originated in the Caucasus. It is a type of tribal rugs that shows the cultural identity of the region and also the status within tribes. The rugs are hand-made or hand-knotted, and usually the women of the Caucasus Community are the one who knit the rugs by themselves. The rugs themselves differ in contrast colors, designs and patterns. All shows the identity of each own area origin and suits as Siberian souvenirs. Three types of Kazakh rugs are Kazakh Rugs from Bordjalou, Kazakh Rugs from North of Erevan and Kazakh Rugs from Echmiadzin.

The rugs from Bordjalou has simple designs and color combination of red, blue, ivory and brown. The rugs from North of Erevan have shorter pile with larger size. They contain traditional medallions as the designs. Meanwhile the rugs from Echmiadzin are much thinner with a longer length and have double wefts. They have simpler designs with darker colors compared to the other types of Kazakh Rugs.

Compared to other Central Asian weaving, Kazakh Rugs tend to have a look in which individual designs are larger in size and more spaced out or most commonly known as archaic. It has a default palette used in almost every Kazakh Rugs. The palette differs the background colors and the patterns colors. The background color of the rug is always warm darker color, and earthy shades for the patterns.

Siberian honey is not like any other honey in common, because this is one of natural honey that are collected directly from the wild nature. According to the market, wild bee honey is one of the most expensive honey in the world. The reason for that is the process that needed to produce this honey and the beneficial content of wild honey itself for human’s health.

Every species of the bees will do the same work step to produce their honey, but there are few things that differentiate between domestic and wild bees honey. Firstly, the time that needed to produce domestic honey is shorter than the wild one. Wild honey can only be collected once a year and we have to wait until the honey is really ripe, so there is no certain time to collect the honey. But mostly, early September is the right time to take the honey. The wild honey consist of more beneficial content, such as vitamins, enzymes, and amino acids. Secondly, the most important difference is the “packaging” process. In which the packaging process of wild honey has no interference from anything, especially human, so it is just natural as they are.

Vodka is a beverage composed mainly of water and ethanol, sometimes with impurities and flavorings left behind. The drink itself made from the process  of distillation of fermented substances such as potatoes, sugar, fruits and grains. Russia known for its production of high quality vodka. It is such a loss to leave the country without having one of the icon of Russia which is vodka. It is such a common drink that found in region like Siberia. Mainly because it helps giving warmth to the people through out the cold season.

Siberia’s greatest vodka is distilled in Itkul Distillery. This is the oldest distillery in Siberia, found in 1868, that is still in operation until now. These days, Itkul Distillery become the only Russian distillery to produce its vodka with pure malt as the main ingredient for fermentation. Aside from using the best ingredients, the vodka also goes through 6 distillation process along the production. These steps help create a Siberian Vodka with a smooth flavor and sweetness.

Birch bark crafts have a really long history in Russia and Siberia. In the Taiga forests, the birch tree provides the main material which is birch bark. One of the reason it is popular to use for crafts is because it is easy to work with, waterproof and has antibacterial properties. The birch tree itself covered most of Siberian countryside with its delicate leaves and visible white bark. Even a lot of Russian songs, art and folk tales are talking about the tributes to birch tree. Especially in Siberia where there are a lot of shaman’s charm. Some charm made of birch bark and called igrushki-oberegi. It is created to protect children from the evil spirits. Slowly the traditional craft turns into a modern decorative ones, where the birch bark is used for utensils in daily life.

That is all for 4 fascinating souvenirs that you can bring from Siberia, for more information about Siberia you can see 4 Differences of Eastern and Western Siberia, How to Buy Authentic Russian Matryoshka, 8 Best Popular Cuisine in Siberia That You Need to Know, and 5 Amazing Facts about Life in Siberia.