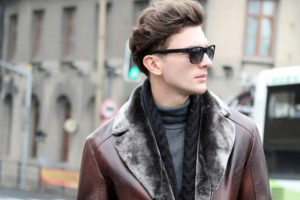 Each men has their own charms and positive points, including Russians. Russian men has their own kind of charms that can’t be resisted. In regards to other articles with similar topics such as Effective Steps How To Date a Russian Man and Main Reasons to Date A Russian Man, this article will tell you the charming appearance of Russian boys that will make women fall head over heels for them.

Here are the 3 charming appearance of Russian boys:

Russian men often wear sober, earthy colors to look calmer and more mature. Dark colors are chosen due to reasons such as dust and mud that are around here and there. This style has been continued for generations, although they wear different colors on occasions too. However, these colors just shows the lifestyle and personalities of Russians who are known to work hard and is very down-to-earth.

Colors aside, casual, comfortable outfits are the trend among Russian men. Long ago, Russian men’s everyday wear would be Adidas tracksuits, Turkish jeans, leather caps, coats, and socks over sandals. Nowadays, tracksuits are long past the season and the latest dress code is casual. On a professional environment, Russian men wear sweaters, blue jeans, and tie-less shirts for a more casual look. Meanwhile, outside of work environment, men wear loose fitting clothes and sweatpants, with additional coats and scarves during winter.

These casual, earthy colored fashion makes Russian men all the more charming. They might not be the most stylish, however, an unspoken tradition was that “Russian men do not tend much to their appearance”. Being sensible and gentlemanly are much more important instead of fashionable (while still being presentable).

Nothing is more charming and hot than a man in traditional clothing. The basic traditional outfit for Russian men are a shirt, pants, a hat and a belt. Only unmarried young men may wear bright colored and substantial clothing, with ribbons on their hats, scarves on their necks, decorated with jewelry and other similar items. On the other hand, grown men dress more humbly compared to the younger ones. Outfits for special occasions aren’t that different with regular outfits. The only change was the type of fabric. The characteristics of traditional Russian male shirt are simple cuts, side seams, triangular wedges, and an occasional slit either on the right or center.

These traditional clothing protects Russians from both the heat and cold, and also show the characteristic of the wearer. The longer the shirt, the more mature and older they are. The length of their shirt may also show their marital status. Instead of tucking their shirts, traditional Russian men wear their outfits with a belt. There exists a saying in Russian where “to untie oneself” means to break the rules or act impolitely. The belts are made using cloth or leather.

However, the funeral clothing for Russian men does not include the belt. It also lack any ties, clasps, or buttons. Meanwhile, for wedding, their clothes are similar to the general standard. Long sleeves are a must, with decorations on the hem of the sleeves as well as the belt.

There are many kinds of winter gear for both men and women. For winter, Russian men wear dark colors and jeans with warm boots. Other types of clothing you can spot Russian men wearing are puffy winter coat, leather coat, fur hats, warm gloves, and scarves. Then, for the inner layer, they will wear sweaters, cotton shirts, and warm coats underneath. Depending on the city, destination, and temperature, layers and layers of clothes may necessary (to avoid freezing to death). In some cities, a long coat might be all you need. In another city, a bundle of layer might be the optimal choice. A warmly clothed Russian man is a sign of a warm hearted man.

When it comes to shoes, dress shoes and dark leather boots are common. The roads and sidewalks are dirty, so white or any light color is a bad idea. In Russia, shoes get dirty easily so a dark color is always the best. Shoe polish are essential as well if they are attending an important meeting. Another thing to note is that Russians, both men and women, will wear waterproof shoes with socks.

For hats, functional and stylish are the key points. Russian men wear hats ranging from ski caps, baseball hats, to fur woolen hats. On the other hand, pants aren’t much of a headache. Jeans are acceptable as well as slacks and other kinds of pants.  In addition, male bags are much more popular than female bags. Russian men use leather messenger or mail bags, not backpacks (which are more popular with American men).

Those are the 3 charming appearance of Russian boys, ranging from regular, everyday outfits to seasonal and traditional outfits. However, do take note that there are also those who dress based on practicality and their job requirements. This article simply explains the general fashion of Russian men. Other culturally related articles you might be interested in are, Likeable Things for Russian People, Hated Things for Russian People, Celebration of Valentine’s Day in Russia, and Wedding in Russian Style. Hopefully the article is enjoyable and helpful.