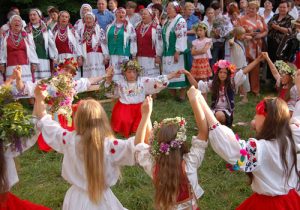 Ivan Kupala Night is one of the most important celebrations in Slavic countries. Outside the area, the festival is probably unheard of. This ritual is indeed distinct in that area only. If you don’t know about it, in short, Ivan Kupala is an interesting summer celebration with lots of singing, dancing, and folk music.

Let’s take a look in depth about this festival.

What is Ivan Kupala?

When the summer arrived, Slavic people are happy to welcome it. Winter in the north is long and harsh, so summer is a long-awaited dream every year. They make a celebration in summer, called the Kupala Night. Slavic people were pagans back in the day. They worship many gods and goddesses. The celebration is to thank those god and goddesses. Kupalo is believed to be the god of love and harvest. While Kostrub is the pagan god of winter and Marena is the goddess of spring.

Also called Kupalo or Ivan Kupalo in countries like Ukraine, the festival marks the end of the summer solstice and the beginning of midsummer when people start to harvest. He’s the one to give the earth fertility and bountiful harvest. Kupalo also means “bathing”, because there’s a purification ritual included.

Ivan Kupala in the Christian era.

When Christian arrived in the area, the Christian authority tried to suppress the celebration. They didn’t completely eradicate it. Instead, they combine it the feast day of the nativity of Saint John. Its name changed into Ivan Kupalo. Ivan is the Slavic name for John. The festival is celebrated on 24 June. Since St. John is also known for its bathing ritual baptism as Kupala Night, we can see the two celebrations can be assimilated into one.

Most eastern European Slavic countries celebrate Ivan Kupala Night. That includes Russia, Belarus, Poland, Ukraine, Latvia. The celebration was on 24 June according to the Julian Calendar. When they switched to the Georgian calendar, the celebration is moved to 6-7 July each year.

During the summer, there is a lot of summer festivals you should not miss.

The tradition of Ivan Kupala in Soviet Countries

As for how each country celebrates it, in general, it’s pretty similar to Ivan Kupala in Russia. Let’s check out some major elements of this celebration.

The kupalo bonfire is a tree chopped then decorated with branches, leaves, and twigs. The bonfire is placed in the village square or near the source of water such as lakes and rivers. Ivan Kupala is also a festival where fire meets water, hence the placement. The bonfire symbolizes a ritual where people bringing a sacrifice to the gods by throwing it to fire. People perform circle dance around it and singing folk songs with traditional instruments.

People will challenge themselves to jump over the bonfire. The ones who succeeded are believed to be having good luck for the following year. People also use the fire to burn Ivan Kupala herbs from last year and other holy items people no longer use. Items and relic especially the ones blessed with holy water can only be discarded by an equally “holy” fire such as Kupala bonfire.

Ivan Kupala night is also when unmarried men and women gather, get together at the bonfire and have fun. There’s also an interesting ritual for unmarried couples. They will make an attempt to jump the bonfire if succeeded without tripping or slipping, it means they will have a blossoming relationship that lasts long.

On Ivan Kupala, people gather plants and herbs. On this day, every plants and herb gathered are believed to be magical. They can cure ilnesses, whether in people or animals. They bring good luck to the house and protect from the evil spirit. Girls will make a charm from the herbs and hang them to their belt. The local priest usually also give blessing to the herbs so the ritual is aligned to Christian values.

On Ivan’s eve, it was the only time of the year where people can find fern flowers. Ferns don’t have flowers, but according to the belief, an exception occurs during Ivan Kupala Night. The fern blooms will reveal secret places where treasures are buried. The lucky ones who found it will be rich and lucky for the following year.

Since morning, girls would wake up early and make a wreath for themselves, consisting of leaves, twigs, and flowers. They would wear it during the celebration and the next morning, girls float their garlands to the water. The girls fortune-tell their dreams and wishes based on the fate of the garlands. A floating one means the dream will come true while the sunken garlands mean the owner will have to wait until next year.

Ivan Kupala Night is when the magical spirits awaken. Witches, mermaid, and werewolves will haunt the earth. That is why the celebration is all night long with bonfire kept being lit until the next morning. The treaures are revealed. The trees speak and move. People are advised not to swim because the evil spirit could drown them. Read other unknown facts of Ivan Kupala Night.

Today, Ivan Kupala Night is a cultural celebration. You don’t have to be affiliated with any religion to celebrate it. It’s even open for tourists, where tour companies offer Ivan Kupala night for visitors who want to enjoy the festival experience. You can put it in your itinerary to when you’re visiting Russia or any post-soviet countries in Summer. You can also visit Siberia during the summer because they have summer festivals in Siberia too.