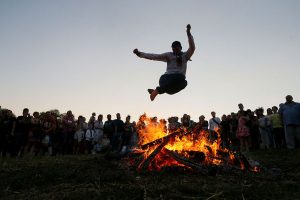 Every country has its own customs and traditions. It is what makes each country unique and interesting to explore. Because sometimes, that said tradition can be found elsewhere in the world. This is especially true in Russia, where it’s one of the most ethnically diverse countries in the world. People dwelling in the west part have their own different tradition than people from the east, Siberia. Siberian people have their own festival. such as Tun Ayran, one of the three indigenous festivals in Siberia.

1. Slavic Rituals, not only Russia

Not to be mistaken, Ivan Kupala is not only celebrated in Russia. It is a ritual by Slavic people. It is celebrated in Belarus, Poland, Ukraine, as well as Russia itself. It’s one of the events in Russia you can find in Summer.

Kupala night is one of the most prominent holidays in the past for Slavic people. Slavic people used to have many gods, each with their role to help them for different needs. Kupala is from the time when Christianity wasn’t yet adopted by Slavic rulers. It is the day of the sun, nature, and summer. The celebration is to praise gods for its gifts in the form of nature, nice weather, and a chance to farm and get a bountiful harvest. People celebrate Kupala Night with dancing and singing.

3. The origin of the name is a combination with Christianity

When Orthodox Christianity is adopted across the Slavic region, they combined it with Christian elements. Kupala is originally a fertility ritual of paganism, but then it’s combined with St. John’s day which falls every 24 June each year.

The name “Ivan” was added later. Ivan is John the Baptist according to Orthodox Christian. Kupala itself means “bathing”, derived from old Slavic words. Christian authority found a similarity between the bathing of Kupala and the bathing ritual of John the Baptism. Hence that’s how it’s adapted to Christianity.

It’s originally celebrated on 23 to 24 June, but according to the new calendar, people now celebrate Ivan Kupala night on 6-7 July. The Slavic region used to use the Traditional Julian Calendar which is around a week late than Georgian Calendar.

4. Cultural rather than religious

Even if someone is not affiliated with any religion, they will find Ivan Kupala night as fun and exciting. It has become one of the cultural identity of Russia and other eastern Slavic countries. Tourists may come and experience the excitement too. It’s very much welcome to participate.

5. It has a winter festival counterpart

In winter, people celebrate a winter ritual called Koliada, which later became what’s Christmas is. Interesting facts, there wasn’t any Christmas during the Soviet era. People celebrate the new year instead. Russian people even have their own Santa, called Father Frost, and his sidekick and granddaughter, the snow maiden. Read more winter festivals in Russia.

6. Girls are different than boys in celebrating it.

Ivan Kupala celebration starts early in the morning. Boys and girls do it differently. Young girls wake up in the morning and gather herbs and flowers and weave it into a headpiece or a wreath. The wreath is for the procession later, where girls will wear it and later, at the end of the celebration, float it away on the river. Girls will wish about their fiancee and wish for marriage. If the wreath keeps floating until far away, then her wish will come true. If it sinks, then the girl will wait for another Kupala night to wish for it again.

Girls also pick herbs with mythical meaning. They weaved into a charm and hang it on their belt for good luck.

The boys instead, they search for a tree. Then they chop it and put the three in the center of the festival (village square, for example). Girls decorate the tree with colorful flowers. A big doll made from straw is placed near the tree’s root. This doll represents the old Sun God Yarilo. Later in the evening, the doll and the tree are burned.

There are rituals and games to do during the night of the celebration. Most importantly is leaping over the bonfire. People make a huge fire and young people jump over it. If a couple is able to jump without getting slipped, it is said their love will last long and their relationship would be successful. Jumping of the fire will also warm the body before plunging into the river later.

The youth then enter into the forest to find the fern flower. People know fern doesn’t have a flower, but according to their belief, it’s possible to find one during Ivan Kupala night. A person who finds fern flower will be granted a year full of good luck and prosperity, according to the belief. The girls enter the forest first, then followed by young guys.

In the morning, girls wearing traditional dresses will plunge into the rivers and send their wreaths away. Boys may catch it if he wishes to make a girl’s dream come true.

8. There are scary superstitions

On Ivan Kupala’s night, evil spirits such as witches, mermaids, and werewolves are believed to be awakened. You should go to the river for a bathing ritual, but you should not swim because the evil spirit could drown you.