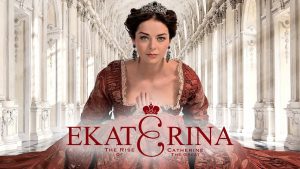 Watching TV shows is one of the popular hobbies of the 21st century. Russian women also think the same. Watching TV shows what people usually do in the evening after a hard day at work. On the weekend, nothing more relaxing than curling up on the bed and binge-watching one’s favorite TV series. There are so many shows out there ready to enjoy. You’ll never run out interesting ones. Also, consider watching popular Russian movies.

Russian TV scene has plenty entertainment to offer. In recent decades, many series and shows were produced in this country. Many got popular and gained a cult following. These following titles are the ones that are especially loved by Russian women. Let’s take a look.

Young Sophie Friederike Auguste moved from her homeland in Germany to marry the Russian crown prince. She has to learn Russian, getting used to the new life in a foreign country, far from people she has known all along. On top of that, she had to adapt to court life, which is full of intrigue and drama, both personal to political.

How does the young princess evolve from zero to one of the greatest rulers or Russia? Ekaterina tells the story of the Empress Catherine The Great. Her era was known for advancement in all aspect of Russian life. The TV series, which has been running since 2014, was quickly become a popular series in Russia. The audience is spoiled with lavish production quality, including incredible set and costume designs. The show is starred by Marina Aleksandrova.

If you’re a fan of the American TV show Sex and The City, a good chance that you will fall in love with Brief Guide. The four main characters of this show are colleagues at work. They become friends because yes, women gotta stick together. The women here are all unhappy. One has a problem with negligence husband, one struggle with being a single parent, one struggle with the relationship, and many more. The show wants to present the audience the reality of life, especially women’s. The TV series depicts the character’s day-to-day struggle to achieve at least a tolerable life.

Poor Nastya is regarded as one of the most expensive Russian TV show ever made. As Ekaterina, the production level was top notch. As did in Ekaterina, the theme was not far from court life and intrigue. The series was set in the 19th century during the reign of Nicholas I. However the story is just not focused on one character, but it revolves around several characters from the nobility or the common folk whose lives are entangled with the court life in some way. Let’s just say it’s similar like the BBC series Downtown Abbey.

The show was so popular that it aired in 34 countries. Many people wish for the sequel and the creators had planned about it originally. However, a sequel was never made because of logistic reasons. There were conflicts in schedule and some actors could not participate because of personal reasons.

A story of a boy from the countryside that moves to a big city carrying big dreams on his heart. Max comes from Voronezh to Moscow in the hope to become a chef. His boss is the grumpy master chef Viktor Baranov. The audience will follow Max’s life in the chef’s kitchen. Packed with many interesting and funny moments throughout the show, the sitcom is popular and well-loved both in Russia and other 10 countries it’s screened.

A lightweight show offering a refreshing entertainment, the show is beloved by the audience that a spin-off was made called Hotel Eleon (2017). Hotel Eleon was also well received, especially it features many characters from the original Kitchen. There were also two movies being produced out of the show, called Kitchen in Paris (2014) and Kitchen – The Last Fight, produced in 2017.

Every evening, Americans will get to enjoy the late night talk shows such as the ones with Jimmy Fallon or Stephen Colbert. Russians also have the equivalent of this. Only started in 2012, you’ll instantly familiar with its late-night format. The host, Ivan Urgant, would start the show by performing a monologue about current events before transitioning to celebrity interviews. The show often invites American celebrities too.

Interns is a medical-themed sitcom that ran from 2010 to 2014. Imagine the Russian version of Scrubs, that’s one way to describe this TV show. It follows the story of a group of medical interns at a hospital. It’s quite popular among the audience. If you’re looking for a TV show to enrich your vocabulary in medical terms, this show is perfect for you.

Infidelities is a Russian TV show supporting feminism. That’s why the show has a special place among women’s heart. It is the first TV show to depict the main character, a woman, who cheats on her childhood lover and now husband. Meet Elena Lyadova. She leads a perfect life. She has a job, a perfect little family, but she’s bored. In order to not die from boredom, she decided to keep one lover and two. Despite the questionable moral of its main character, the series is well received and not considered among controversial TV shows in Russia.

So those are 7 Russian TV series that are loved by Russian women. From historical drama to hilarious sitcom, Russian TV scene is actually pretty diverse. You can also watch science fiction TV show as well such as Better than Humans or even Russian cartoons. The choice is endless and it can help you improve your Russian.