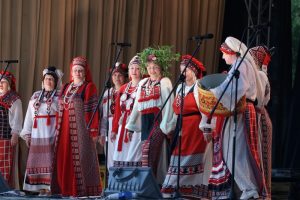 Summer is the season Russians expecting the most. It’s understandable, as one of the countries with the harshest winter in the world, Russian long for this time of sun and warmth. People will plan all sort of summer activities. There are many things to do, but one thing for sure, it’s gonna be outdoor, under the shining sun and the warm summer breeze.

People in the city will flock the public park to have a picnic with friends and family. Some will plan to travel out of town, for example, to Lake Baikal or the resort city Sochi at the coast of Black Sea. Check out 12 perfect holiday places during summer in Russia. Some plan to go to Russian Summer Ethno Festival and dance their heart out. Happiness, joy, and excitement are everywhere during the Summer in Russia.

What about Siberia? The eastern part of the country will not miss any moment under the sun. Especially when Siberia is always cold most of the time of the year. The folk at Siberia have their own way of celebrating summer. There are several festivals held by indigenous people living there. So if you happen to be in Siberia during summer, stop by at any of the events below.

The full name of this festival is Mir Sibiri International Festival of Ethnic Music & Crafts. The name kind of gave it away already. It’s an international folk music festival. Ensembles across Siberia take a turn to perform their musical crafts. There are around 25.000 music fans attending. For three days, music enthusiast will be spoiled with a bulk of performances can’t be seen anywhere else in the world.

On the festival ground, the attendee is encouraged to wear traditional costume. You will see such a diverse display of Russian people and ethnicities. Guests will be entertained by musicians performing traditional music from Belarus, Buryatia, Sakha, Tatars, Chechen, and many more. Occasionally, international musicians also perform, making the festival even more colorful.

The attendee also got to taste the traditional Shurpha, meat soup with vegetables, A laghman, a large portion of noodles and meat, and Pies with cabbage, sturgeon, and cheese as its filling. And those only a few among so many ethnic dishes Siberia offers. Guests can get accommodation at the village while getting to know locals, their custom and tradition. Some choose to camp in the nearby forest, getting closer with nature.

Before learning what Tun Pairam is, we have to first get to know about Ayran. Ayran is a fermented dairy product for the livestock herders in Khakassian, Siberia. The process of making it starts in June when the livestock begins producing milk after pasturing the spring’s grass. To begin the process, people celebrate it in a holiday called Tun Pairam, the holiday of the first milk.

But its meaning is more than that. Tun Pairam celebrates the abundance of summer. In the festival, there will be rituals, folk music and games, contests, a lot of singing and dancing. Thousands of people attend the celebration at the Sagaysk meadow, near Abakan. Apart from folk music and instruments, the audience also enjoys the Tuvan throat singing performance.

Tun Pairam is also the opportunity to taste various traditional dishes. Wrestling competition is also one of the things anticipated by the attendees, as well as the horse race. The main event is the ayran competition. Women enter the contest of Ayran and presenting their best techniques and recipes. Guests are welcome to have a taste. Each maker of Ayran present and different flavor. There are traditional songs takhpakhi are performed to praise Ayran before drinking it. Chilled Ayran is perfect when the day gets hot.

Not to forget the traditional Khakassian dishes to try. Guests are recommended to try Myun, the mutton broth. There’s also meat broth with pot barley called charba ugrei. Potkhy is a boiling sour cream made with flour and eggs, perfect for dessert.

Another ethnocultural summer festival in Siberia, The Yordynsky Game is worth to experience. According to the festival’s official government website, The Yordynsky Game is like the Olympics but for Central Asian nations. Sports to be contested there are wrestling, horse riding, weightlifting, archery, and for the women, beauty pageant. However, it has a twist.

For example, the archery uses the traditional bow. The weightlifting contenders have to carry and move a real stone, weighing from 110 kg to 125 kg. The martial art is of Buryatians, an indigenous group in Siberia.
Men compete to decide who is the strongest. In the past, the winner got to marry the most beautiful girl in the village and received livestock as rewards.

The highlight of the festival is Yokhor, an interesting dance ritual of Eurasian people. Thousands of people linking hands and circle a mountain. Together, they dance to folk music. In 2017 5000 of people formed the largest human ring in history. Let’s just say it’s a big circle of diversity, unity, and of course, fun.

Now you can plan accordingly when you visit those festivals. Happy summer!