Russia is a nation with a very large population. Based on the member of its population, Russia is on the top 10 list of the most populous countries. Among around 140 million people living in Russia, Islam is this country’s second most believed religion. According to a survey held there, 6,5% of all the populations are Muslims.

During the presidency of Vladimir Putin, Islam has been developed significantly. He shows his support for Islamic education and religious activity by subsidizing the construction of mosques. He also encourages Muslim immigrant from the former Soviet Union states to come to Russia. The support given to the Muslim communities must have contributed to the development of Islam in Russia.

In doing their religious activities, like praying and listening to a sermon, Muslims need a mosque for a place to do such a thing. Kazan, as one of the largest city in Russia, provides their people with places of worship, such as mosques, churches, and synagogues. One of Kazan mosques is Bornay Mosque. There are some best facts we can learn about Bornay Mosque.

Just like other mosques in Kazan, this place of worship is a good place where we can find out about human history and culture. These are some best facts about Bornay Mosque in Kazan:

1. The Story Behind The Building

All three of those mosques had been through the period of the soviet union. The construction of this building was funded by Mohammad Sadiq Bornaayiv. The name of the donator was the reason why this mosque was also called Burnayevskaya Mosque. The project of building the Bornay Mosque, in general, was realized by Pyotr Ivanovich Romanov in 1872 while the minaret was elaborated by Fyodor Nikolayevich Malinovsky and LK. Khroshononovich.

The site where the mosque was built used to be an area of an old wooden mosque. Taking place in the Old Tatar settlement, an area recognized as the historical part of Kazan, the mosque is very easily noticeable even from a distance. The whole building is covered with red bricks and built in the style of national romance eclecticism. Eclecticism is a design that takes the use of previous historical styles in order to make a new one. An example of building with this style is the Church of Saint Clare in Horodkivka, Ukraine. While national romantic style is a form of Art Nouveau where the arts of decoration is effected by the natural form, like flowers and plants, especially its curved lines. This style can be seen in the form of many buildings, such as Frogner Church in Norway and the Tolstoy House in Russia.

The Bornay Mosque consists of only one floor and one praying hall where Muslims gather to do their daily five-time-prayer or to listen to a sermon on Friday afternoon. Right over the entrance door is standing a minaret, which was built in the year if 1895. From the speakers installed in minaret that is connected to the microphone and sound system inside the hall, Muslims can hear the prayer calls as a reminder for their prayer times. The interior was designed with the influence of the medieval Tatar and Russian traditional culture.

With the decorations that include elements from ancient Tatar and Russia and the style that shows the touch of national romantic style, the mosque looks a little bit like an Orthodox Church. What makes it even more unique is the fact that most members of the congregation are immigrants. This truly shows the development of Muslims of this city. So, the next time you are in Kazan, make sure to come to Bornay Mosque to not only admire the beautiful form of this particular mosque but also to see how much the Muslim immigrants are welcomed in Kazan.

3. Transports, Meals, and Interesting Places Nearby

Bornay Mosque is not difficult to reach. In order to get there, you can take a 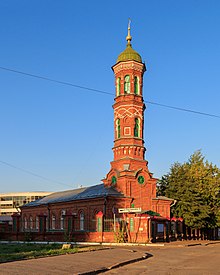 bus for around 27 Rubles or around 6,000 Indonesian Rupiahs. If you want more convenience transport, you can ride on a taxi with an approximate cost of 79 Rubles or around 170,000 Indonesian Rupiahs. While you are in Kazan, make sure to not leave it without tasting the meals. You can spend around 500 Rubles for one time meal. There are many different kinds of meals in Kazan, such as Russian, middle eastern, or European meals. You can also find Asian food, even fast food in this city. Restaurants are easy to find and most of them open from am to pm.

There are other interesting places to visit in this area. For Muslim travelers, you can enjoy the grand design of many mosques near to Bornay Mosque. Take Anniversary Mosque as an example. This mosque, who is also known as The Thousandth Anniversary of Islam Mosque, was built in honor of Volga Bulgars’ conversion into Islam. With the domination of red color and green roofs, this mosque is also worth to visit. Besides that, with the distance below one kilometer, you can also find Nurulla Mosque, Soltan Mosque, and Zangar Mosque.

Since the mosque is located in The Old Tatar Settlement, there are many historical buildings that you can find in this area. For example, there is a museum called Chak-chak where visitors will be served with cups of tea complemented with oriental sweets. Not only that, you can only learn about the recipe of the national dishes. You can also visit the Tatar museum of life where you can buy some art crafts and souvenirs to remind you about your experience in Kazan.

Those are some of the best facts about Bornay Mosque. Now you know that you can get a great experience by traveling to Kazan. Come and visit the mosque, enjoy the meals, and buy yourself some souvenirs 🙂