Have you ever go to Russia? The nations offers one of the coolest things in Kremlin city. The country is really busy to prepare the most anticipating in football events, the World Cup 2018. Take place in 12 venues around the Russia, 32 best nations will compete to get the trophy that footballer dream about. The Russian serves the nation with the best field they ever had. So when we talk about the stadium, we talk about the comfortable, the history, the ideas behind the design, and last but not least, Is it cool to take a picture in here? Lol – just kidding. From 12 to 5, here are the 3 best stadium in Russia for Soccer. 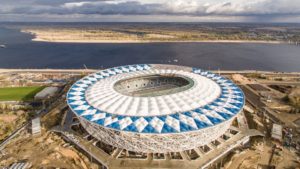 Have you ever go there? The Nizhny Novgorod is one of the new facilities in Russia. Since the stadium was designed specifically for the tournament, the government started the project in 2015. What this stadium can offer is really amazing : Located attractively by two major river, the Olka and the Volga river, Nizhny simply enrich their stadium with white, azure, and blue palette to represent the river and stand at the historic land known as the Spit (Strelki)

Not just the river, the stadium has a slim pillars which support the construction from outside and exposing the semi – transparent façade and have the capacity up to 45,000 seats during World Cup plus 902 low-mobility groups of people. . When you walk at night, you will see the highlited of illumination at the circle of the stadium .

Nizhny Novgorod is a must-visit list when you go to Russia. What comes from your mind when you talk about Russia? The language, the woman, and of course, the landmark itself. Nizhny was located near the 500 years-old Nizhny Novgorod Kremlin landmark. It is the most eye catching landmark I’ve ever seen since I go to Russia.

The construction began in 2015 when ministry of Sport of the Russian Federation signed contract with OAO Styrotransgaz for 21.6 hectares building for the  stadium. Year by year the construction continues and in 2016, basic foundation works were completed and the floors and platform for upper tier were erected. The contractor already installed the metal structures for the tribune zone. The remaining works is expected to complete at the end of 2017 were the contractor finished the installation for the final design position of the coating, and the concreting stands at the lower stage and the overpass for the pedestrians.

What  will you love about the design of this arena is because of the service for the fans with disabilities. The arena offers special seating for the disabilities with extra space, of course with the companions so they can spend most time together to enjoy the match. Not just the seats, it offers special food outlets and the toilets. Wow, they are really pay attention for this.

After the end of the World Cup 2018 event, the stadium will functioning as multi-purpose events, including the shows, concerts, and any other events. It also possible for the exhibitions and the expo. At the outside, they have arena grounds which offer tennis courts, futsal dields, parking lots and the park. The address the stadium is at Betankura s.t 1A, Nizhny Novgorod , Russia. Finally, after the world cup this stadium will be the home of the FC Nizhny Novgorod. 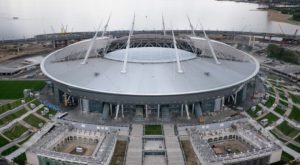 So, this stadium is one of the most beautiful venue I’d ever seen in Russia. Before we take a look for the architecture, lets see the history of the city – the Saint Petersburg. It began in 1703, where Peter I The Great found this city. Soon after this, it’s city became the Russian’s new imperial capital.

Because of the important things in this city, The design of the Saint Petersburg were created by the best talent in Russia and the Europe. You may hear the name of Fyodor Dostoevsky, Dmitry Shostakovich, Joseph Brodsky, and Nikolay Gogol left their creaton in this city.

The historic value of the city makes the Unesco awarded them as the one of the UNESCO World Heritage site. It boost the visitors around the world and they busy to serve about five million tourist every year.

So here it is, one of the 3 best stadium in Russia for soccer. One of the most successful football club in Russia lies in here. FC  Zenit Saints Peterburg. Pretty good isn’t it? Great stadium, best football team.

The design of the stadium is pretty unique. Inspired by the spaceship, the architect has the vision of the spaceship that has landed on the shores of the Gulf of Finland. The height is so high it can take up to 80 metres. Imagine maybe someone will bring starwars spaceship into reality lol.

The stadium is one of the world’s most modern arena in the history of Russia. Its equipped with the retracable roof and the sliding pitch, which able to host any type of the event . For your information, this stadium is warm enough even to host football matches at the winter where the temperature inside stadium is just about 15 celcius degree.

After the world cup, venue will host any different type of events. The venue is the one of the choosen stadium which host three matches in group stage as well as one of the competition’s quarter final. 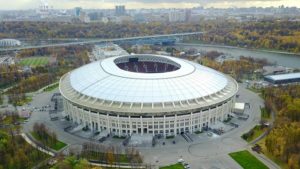 Finally, the most respected stadium in Russia, the Luzhniki. This is the main and the Russia’s biggest stadium. It located biggest city in Russia, the Moscow. The represent the glorious and as the symbol of the Russian Football. This is the home of the football matches in the country. The building of the stadium starts in 1956 where Russia hosted the Summer Spartkland.

After the event, the Luzhniki hosted some major event in the world, including 1980 Summer Olympic , ice hokey world championship, rugby, athletics, and the music concerts. The stadium is a symbol of the pride of the Russian and become the first of the 3 best stadium in Russia for soccer.

Luzhniki is the home of the Russian national teams and several football club already played in here. However, football always takes the most part in this venue, having 3000 matches until now.

The remake of the Luzhniki for Russia FIFA World Cup 2018 began in 2013. It challenges the engineers because they have to preserving the historical façade of the stadium , which has become one of Moscow’s true landmark. Inside the venue, all of the things were totally refurbished : jogging track was removed, the stands moved closer to the pitch, and made rectangular, the gradient adjusted and two extra tiers added. The capacity of the stadum increased from 78,000 to 80,000. Luzhniki will retain its status as the country’s main stadium and still serving Russia for the national matches.

To get there, the stadium can be reached with red metro line 1. Station Sportinavia , or alternatively Vorob’yovy Gory, both lie within short walking distance of the stadium. Line 1 directly connects with Moscow’s city centre , and the ride from either Okhotny Ryad or Biblioteka takes no more than 10 minutes. If you go there by car, orientate yourself with regards to the Moscow river and take the first exit after crossing the Moscow River at the bend where the stadium is located.

So which one is the best for you? Luzhniki? Saints Petersburg? Or maybe Nizhny? Whatever you choose, you will love it.