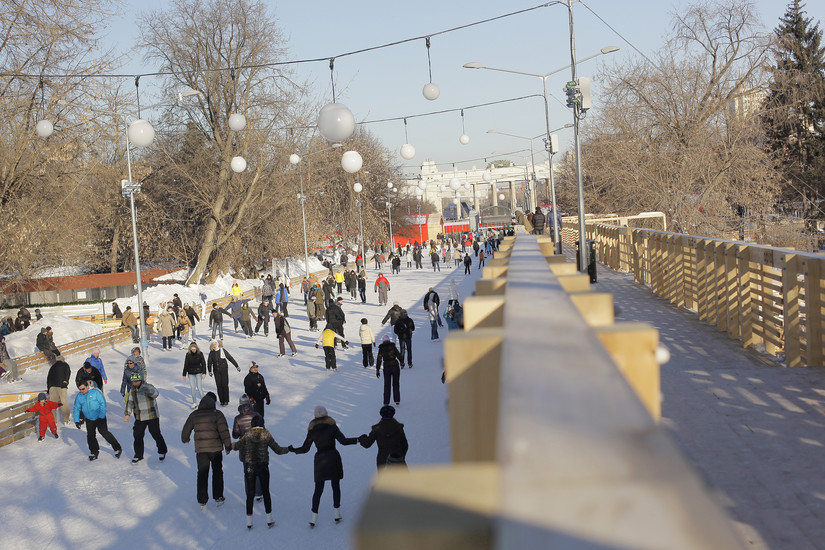 In this technological era, children tend to play games using their gadgets, rather than playing outside, without realising that being inside of the house, or even indoor playground may make children become unaware of their surroundings, especially the natural phenomenon. Fortunately, in Moscow, the biggest city in Russia, there are several places for children to play and have adventurous outdoor activities. Here is the list of the best playgrounds in Moscow, Russia.

This newly-built outdoor playground is considered to be the best one in Moscow. It consists of nine play areas where children may explore the nature with water, sand, as well as sound, texture, colour, and height through activities that involve all senses. Children will not only be able to play, but also to learn law of physics which may also train their motor skills. There are also several typical playground rides, such as swings and slides, but in an upgraded design. What’s also interesting is how the site was built and arranged in such a way that children who play there tend to communicate with each other, so that they will also learn the value of friendship and teamwork there.

This would be a paradise for children who like to play with sands, as there is a huge sandbox, equipped with a “conveyor” to extract and transport the sand. So that the children may not only play a usual sand games, such as building castles or houses. This park also offers three separated playgrounds for children of all ages. One playground, built for the youngest ones, is located in the centre of the park, where there are mini swings, low slides, as well as sensory tracks for children who are in the learning phase of crawling. The other playground, built for older children, offers big slides, big swings, and various adventurous rides for climbing, such as webs, bridges, and climbing wall. The third playground is the place of a wide variety of swings, in any sizes and types. Aside from the playgrounds and sandbox, this park has many sport fields, including where volleyball court, cycling paths, modern skatepark, and BMX velodrome.

The playground offers game models of spacecraft and rockets. It is located next to the museum of Buran spacecraft, which explains all the space exploration theme. All the ordinary rides are transformed into more appealing ones, such as slides that are attached to the model of Progress and Vostoc vehicles, which is also equipped with a mesh tunnel to connect the two, where children may crawl through to move from one another. Aside from that, children may also try to operate the artificial satellite of Earth, capsule vehicle, and lunar rover. What’s amazing is that all the elements of the playground are made from environmentally friendly and durable materials, making this place one of the best playgrounds in Moscow, Russia.

The park consists of two playgrounds, each for different age groups. For children up to 3 years old, there is a separated section, where there are a sandbox and small swings. The elements in the playground are rubber-coated, making it safe and may protect against injuries, even for babies that are learning to crawl. For the older children, there is another playground, which filled with complex balancers, and another swings, but in a more extreme version. There is also a large-structured rope park, with several levels, that may seem complicated yet enticing at the same time.

In this area of one of the oldest parks in Moscow, there are several playgrounds that are available for children of all ages. The biggest ones are the one near the House of Children’s Art, the one near the Mayskoye pond, and the one on the Big Putyaevsky pond. There is also a site named “Emerald City”, which is for children with disabilities, where all the usual rides, such as swings, carousel, and even slides, were built in a way that are accessible by children with disabilities, as well as wheelchairs.

This is another park that also offers specialised playground for children with disabilities, where there are rides that are convenient to drive in wheelchairs. Aside from that, there is also a large playground for children at the age of 3 to 14 years old, filled with several rides, such as slides, spinners, climbing lines, twists, turntables, as well as hangers, equipped with safe coating. For a more adventurous experience, there is a rope park named PandaPark. You may find 9 routes in the rope park, which has a total length of 580 meters. Every route has different levels of difficulty, equipped with steel rope to ensure the safety of the children. There are also climbing wall and bicycle paths attached to the rope park.

Just like the name, most of the elements in this playground are made from wood. This playground was built in the resemblance of a roller coaster, a pirate ship, and an astronauts’ training ground. It is divided into 3 different zones based on the children’s age. The first one is for the smallest children (below 7 years old), where the zone is closed and more protected. While the other ones in the open space area are for children at the age of 7 to 10 years old, and 10 to 14 years old respectively. This park is also equipped with rides that are accessible for children with disabilities, such as a bicycle that allows the children to do exercise for hands, as well as bright color zoning for visually impaired children. Aside from that, the design of every ride, as well as the materials, are all in accordance with the state’s rules concerning children’s playground, which then make this one of the best playgrounds in Russia.