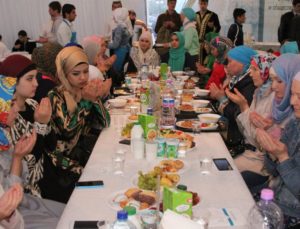 One of the cities showing the growth and flower of Muslims in Russia is the city of Moscow. Moscow is the capital of the Russian state. In the month of Ramadan, Russian Muslims need hard work in running the fast in Moscow, Russia. This article discusses the 4 Muslim’s struggle to celebrate Ramadan in Moscow. Then, the capital city of Russia which is Moscow has become the place where the most Russian muslims live in there.

In the month of Ramadan is a holy month for Muslims, because this month full of blessings and full of forgiveness. Therefore, every Muslim would want to get a blessing by running the fast and other religious services regularly. However, there are some conditions that make Russian Muslims feel heavy running worship in the month of Ramadan. Here are 4 Muslim’s struggle to celebrate Ramadan in Moscow, as below.

Fasting is the condition of a person to withhold food, drink and other activities that break the fast from sunrise to sunset. Russia is one country that has a daytime longer than at night. It is this kind of circumstance that makes fasting in Russia hard for Russian Muslims. Breaking the fast (at sunset) in Russia at around 21:30 Russian time and fasting time (at sunrise) around 01.36 Russian time. So from there can be seen fasting time in Russia nearly 20 hours.

In some Muslim countries like Indonesia often apply reduction of work duration when in ramadan. But this condition is different from Russia, although Islam is the second largest religion in Russia remains no tolerance or reduce of duration of work during the month of Ramadan including Muslims in the Russian city of Moscow. This is because the Russian government has implemented a policy of no tolerance for the duration of work remains the same as regular months. This condition makes some criticism from neighboring Muslim countries. Therefore, Muslims in Russia, especially in the city of Moscow must struggle in carrying out the religious command of Islam in fasting month of Ramadan.

Although Russia is the largest Muslim-majority country in Europe and Islam is Russia’s second largest-largest religion, the city of Moscow is still finding it difficult to find a halal restaurant during Ramadan. One of the favorite places in breaking the fast is the ramadan tent. In ramadan tents it only prepares bread and dates. This is not enough for the Russian Muslims who only eat bread and dates to survive in almost 20 hours every day. Moreover, the duration of work is not reduced to make Muslims in the city of Moscow is still struggling to celebrate the month of Ramadan. You can also read about 8 Most Popular Halal Restaurant in Moscow

The geographical situation adjacent to the northern kutup makes Russia has extreme temperatures. Geographical situation is what sometimes makes the Muslims in Russia continue to struggle to run worship, especially fasting in Ramadan. Sometimes in the city of Moscow can reach temperatures below zero degrees Celsius. This state of affairs shows how difficult it is to run a fasting month in Ramadan in the Russian city of Moscow. In spite of such conditions, Russian Muslims continue to observe Ramadan fasting month regularly and earnestly. Muslims in the city of Moscow usually when breaking the fast often consume any drink that can warm the body, except alcoholic beverages. Indeed there is no such thing as ginger drink, but there is a typical drink served during breaking the fast and can warm the body known as kvass. This Kvass is a fermented beverage. This type of drink is widely consumed by Russian Muslims residing in the Russian city of Moscow. Read also Halal Foods in Russia.

Thus a brief but profound explanation of 4 Muslim’s struggle to celebrate Ramadan in Moscow. It’s hard to run fast in Ramadan in Moscow. In addition to being a second religion, there are also challenges for Muslims in Moscow in fasting Ramadan prayer is the duration of fasting time is very long nearly 20 hours. There is also a weather condition in the city of Moscow that is too extreme when the month of ramadan falls in winter. This extreme situation can reach no degree celcius. For those of you who are curious about the situation and conditions during the month of Ramadan then you should visit Russia during Ramadan. Before you visit Russia you should understand Russian to better communicate with Russian citizens in the Russian city of Moscow.