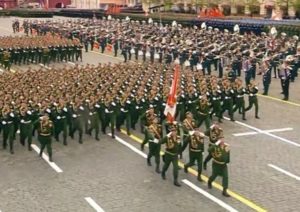 9th May is one of the historical dates for Russian society. Most of Soviet states have this celebration. The victory of Russia against Germany in World War 2, always held massively. But this celebration remains wisdom and never loses its meaning. The celebration of Russia’s victory as a tribute to the struggle of heroes in World War II. The Soviet Union lost more than 26 million people in battle known as the Great Patriotic War. How Russian Celebrate the Victory day? In that day, there is Moscow Victory Day Parade. Here some Facts of Moscow Victory Day Parade.

Moscow Victory Day Parade is the most famous celebration event of Russian Victory day. Every year, thousands of soldiers line up on Red Square’s “stone floor.” Not only that, the parade was to show the latest Russian military technology gear. Like the Armata tank that was first exhibited to the public at the Victory Parade in 2015.

The parade takes place at 10:00 am local time, it involve thousands of soldiers from various Russian military units. Some of them wears World War II era uniforms. Read also History of Victory day in Russia

Russian President even invites the presidents of other countries. Like the leader of China, European countries, and even the president of Indonesia. See also another national holiday of Russia, Labor Day as Spring day in Russia

People call this parade a military parade. All parade participants wore military clothing. Participants of the parade are russian soldiers who wear fully military-dressed. Even some soldiers wore clothes worn during World War 2. At the time of this parade many children were watching and wearing soldiers’ clothes as well. This proves that the nature of Russian society is so patriotic.

3. Showing Off The Latest Military Stuff

Russia is a superpower country. Russia famous for producing the latest and most powerful military weapon. In addition to weapons, Russia also made its own military vehicle. Russia always makes the latest weapons to improve the security of the country.

Over the past few years, the Parade of Victory day in Russia has shows their new military devices. For example, in 2015 Russia exhibited a T-14 Armata tank. This technology is for Arctic exploration. In addition, AK-12 machine guns for paratroopers are shown to the world.

According to sources from the Russian Ministry of Defense, this year’s parade will show Terminator-2. Termonator-2 is a Russian combat engine designed to support infantry. A total of seven units of “Terminator” BMPT-72 belonging to the Russian army will enliven the Victory Day Parade in Moscow for the first time on May 9.

“Terminator” is an armored vehicle use to protect tanks operating in urban areas. This combat vehicle is armed with two 30 mm cannon, antitank missiles, and machine guns. The “Terminator” missiles are claimed to be able to easily defeat tanks and even enemy strongholds at a distance of up to 5,000 meters. The vehicle is also capable of fighting helicopters. While weapons can eliminate the mainstay of enemy personnel who are at a distance of up to three kilometers. You may read also Why We Must Learn Russian Language

In 2017, “Terminator” fought in Syria. Last year, the Russian Ministry of Defense bought the first ten combat vehicles. Next month, many people predict Russian army will held the first stage of delivery of “Terminator”.

4. The Excitement Over than Parades In Other Countries

Not just Russia that commemorate the day of victory in May. Other European countries that involved in World War 2 also commemorate it on the same day. For example Paris, Ukraine, and so on. But the Russian parade is the bigest parade of the countries. In the past before Putin served as president, Paris parade was the most lively. After Putin served as president of Russia, the military parade was held much larger and lively. This is because Putin and his family are directly involved in the victory of Russia.

Russian community really loves their homeland, Russia. The celebration of victory day is great fanfare. The Russian community is now descendant of the heroes who fought in World War 2. At a military parade on the day of victory, they always bring pictures of their family. The photos they brought were photos of their families who were directly involved in World War 2. Even President Putin also brought a picture of his grandfather who died during the struggle for victory.

6. Enthusiastic People To See The Parade On The Roadside

The military parade on victory day is the biggest military parade of the year. This makes the enthusiasm of Russian society very high to see this parade. On that day, almost all military workers were go down into the street for parade. President Putin also participated in this military parade. It is inconceivable that the public enthusiasm. Almost all the Moscow citizens witnessed this parade. Although this parade will be broadcast on TV, but watching this directly is a must. They even climb trees to see the parade directly.

That’s all some facts of Moscow Victory day Parade in Russia. If you have plan to visit Russia, its recomended in Early May. In addition you can see this parade, its still spring day in Russia. See also How Russian Celebrate Easter Day and What Traditions of Easter Day in Russia