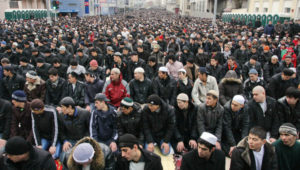 The enlightened Islam has been developed in Russia since many centuries ago. The history noted that the appearance of Islam in Russia began in the seventh century.

It is much different with the other European countries where Muslim population is a minority, but in Russia, so many indigenous citizens of this country are Muslim. Moreover, muslims have become the second largest population after the community of Orthodox Christians.

Besides both religions, there are also the other religion in Russia. However, the different religion never makes them hate each other despite of the different faith. Even, the Russians are still able to live together peacefully.

It seems more pleasure to get to know that Muslim community contributes a lot to create harmony living by giving tolerance to each other’s faith. Despite how Islam has been well in Russia in this time, yet the history of the Muslim population in Russia is quite complicated. It has been through ups and downs with so many stories about tolerance, acceptance, oppression, and violence until Islam could be as great as it is in the present.

The History of Muslim Culture in Russia

Based on the Arabic sources, Islam has entered the territory of Russia Feederation since the seventh century (approximately 641 C.E). The entrance of Islam begun particularly in the Nothern Caucasus. Although Islam expansion had been begun in 7th century, but there is a thought that said Muslim culture in Russia were made in 19th century.

The Story of Muslim Culture in Russia Today

Based on a cencus, nowadays muslim population has been reached to 10-15 percents among all of Russians. Then, the capital city of Russia which is Moscow has become the place where the most Russian muslims live in there.

Unless Istanbul is included from Europe, Moscow could be placed on the first top of largest Islamic city in Europe.

After all, because of Allah’s blessing, in this time there is no more arguments against Islam influence until the Muslim culture can exist. Since its starting point, in this time, the Muslims in Russia has got the next step which is called today as “Russian Civilizations”

The tradional branch of Muslim culture was defined as its connection to etjnic culture and being only adhered to the one and only mahzab–the old-fashioned theological and legal school of thought. The classificatiom of mahzab is depended on the area in Russia like this following explanation :

Meanwhile, the adversed one–the non-traditional branch–let the broader border in Muslim culture. This view appeared in Russia after the breakup of Soviet Union. With the open minded, this Muslim culture is termed entirely as one “Islamism” which is including of :

By time, there is a change of demographic data that shows a spike of Muslim immigrants who currently take a place in  the Urals, the Volga Region, and Western Siberia. The situasion ckuld be changed as both internal and external migration keep rising up. The immigrants come originally from the North Caucasus, Azerbaijan, and Central Asia.

Day by day, the Muslim influence is continously expanding. Because of that, it makes a connection between Islamic island” and the whole “Islamic continent.”

The most experts on Russian demographic development also agree about the prediction of Islam becoming the secon in the twenty-first century. The result of observation showed that though the ethnic Russian population being declined, but the the ethnic Muslim in Russia keeps growing up rapidly. It seems much better to have the view of Muslik community as single entity is not that easy to distinguish between the indigenous Russians and the foreigners.

Today, muslim culture in Russia becomes the central part of modern life. The root of Islam is gradually taken through trade and other economic relations with the Muslim world. Then, the next movement  campaign a new step to let both Islam expansion and the modernization becoming mixed. The importance of Muslim culture growth now has been shaped into five directions that consist of :

Besides getting know about the Russian Muslim culture, you might also need to know how the etiquette in Russia.

Okay, that is all information about Muslim culture in Russia that we can share to you. See you, good people!