When we travel to other countries or cities and go sight-seeing, we will see many things that give that particular place a certain characteristic. For example, when you go to New York, you will see tall buildings all over the city. The Empire State Building, Rockefeller Centre, and Time Square are only a few treasures you are going to enjoy when you are spending your holiday in the Big Apple.

Just like New York and its beautiful architected buildings, Rome is also on the list of the destination you must go if you want to enjoy some of the greatest architecture, especially the Roman style. Who does not know The Colosseum, an awesome piece of Roman architecture built in 72 AD? You will also be mesmerized when you visit the other beautiful ancient designs displayed on Aqueducts, the Pantheon, and Temple of Vesta.

New York and Rome are just two examples of destination for people who love to see beautiful buildings. Another perfect example where you can be amused by its architecture is Russia. When you go to Russia, you will see many buildings with the style of Russian Revival Architecture. Church, railway station, gallery, museum, and even city hall are all standing tall and showing its magnificent design.

So, what is Russian revival architecture? What’s the story behind it? Let’s find out about it

1. What Is Russian Revival Architecture

Russian Revival architecture is the result of mixing two kinds of styles. The base of this particular design is the Old Russian architecture. This is then blended with some assets of folk Russia and some elements of Byzantine architecture.

2. What Is The History Behind Russian Revival Architecture?

Over the years, the Russian revival architecture continued to grow and develop. Through the development, we can sense how big of interest the architecture world had in both the folk culture and the old Russian architecture.  Even more important, you can feel how much the Russians love their country through their style of construction.

Now, let’s learn the history behind Russian revival architecture and how it developed from time to time

As mentioned above, one of the currents of the Russian revival style is the 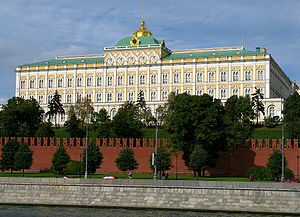 Russian-Byzantine style. The idea was applied for the first time by Konstantin Thon. He was an architect that worked officially for the Russian empire during the reign of Nicholas I who fully approved Thon’s style of architecture. They both had the same interest in the mixing style of Byzantium and Russia and that was why the emperor loved Thon’s works. He loved it so much that he even showed Thon’s model designs book to the other architects. What makes Russian-Byzantine style is the mixing of Byzantine’s composition methods and vaulted arches with the Russians’ ancient exterior ornaments. You can Thon’s application of this style on his works for the Cathedral of Christ the Saviour and some other cathedrals in Sveaborg, Yelets, Tomsk, Rostov-on-Don, and Krasnoyarsk. He also displayed the Russian-Byzantine style through the designs of the Grand Kremlin Palace and the Armoury in Moscow.

During this time, Alexey Gornostaev, a Russian architecture, improved Thon’s Russian-Byzantine style. He was popular for setting a certain style for churches’ design. In his work, you can see the influence of romanticism, Slavophilism, and vernacular architecture. He was the one responsible for both the rebirth of the Russian’s tented roof and the augmented motif of Russians’ tents with the vault structure of Romanesque and Renaissance.

The year 1861 was the year of one of the historical moments in Russia. Known as the Emancipation Edict of Russia, that was the time of reformation where serfdom (slavery) was abolished all through the Russian Empire. Thanks to the emancipation, the liberal elite were pushed to learn about the roots of national culture which resulted in the birth of the Pseudo-Russian style. This style was represented through the works of Ivan Ropet and Viktor Hartmann. Both architects have their definition of vernacular architecture. The definition was articulated very well through their way to put together with unmatched pieces of vernacular architecture, steep and barrel roofs, and wood tracery. They chose to use the word because some of their imaginations cannot be applied on masonry but only on woods.

The fact that they chose wood came with a good and bad side. The bad side is wood’s very short life span (that is why, these days, you will rarely find the based-on-woods architectural works). The good side is the short time wasted on finishing the buildings. In conclusion, using woods is advantageous when you are building short-term projects such as exhibition pavilions and coronation stands.

Another part of the history behind Russian revival architecture is the time when a new trend was happening in the Russian Orthodox Church. A large cathedral, where 10,000 worshippers could fit in, was built in the country outskirts. The building of this church was aiming to reach for the working class (at that time, the wealthier class had stepped away from the church). Since the cathedral was to build in the outer part of the country, the architect had to come with the style on which the cost, both initial and maintenance, was low. For sure, it had to be able to accommodate thousands of church-goers. Byzantine architecture ticked all of those boxes. You can see the Byzantine style exhibited by the Dorogomilovo Cathedral in Moscow, Our Lady of Iveron Cathedral in Moscow, and Kronstadt Naval Cathedral in Saint Petersburg.

Now we have learned the history behind Russian revival architecture. Do not forget to visit the buildings with this beautiful architecture the next time you visit Russia 🙂