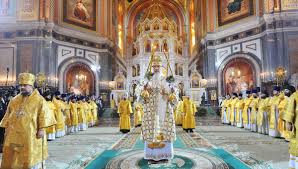 Christmas in Russian Orthodox Church. Every year Christians around the world celebrate Christmas. Christmas Day is the long-awaited day. There Christians celebrate life. The birth of Jesus is a symbol of hope to be forgiven, to be reconciled, and to be restored. Jesus replaced darkness with light, fear with joy, and death with life. Russian have unique culture, you can read Russian Bear is a symbol of culture in Russia

As for Russia, Ukraine, Serbia, Belarus, Egypt, Ethiopia, Georgia, Kazakhstan, Macedonia, Moldova, and Montenegro still celebrate Christmas on January 7th. Though celebrated on different dates, the tradition of Christmas remains the same. They both decorate Christmas trees, give gifts, and install a green circle on the front door of the house. Read also Dining etiquette in Russia

Some Catholics are fasting begin on December 24. On Christmas Eve, the fastest fasting: forbidden to eat until the appearance of stars in the sky. When breaking the fast, they will not eat meat or fish, but a grain of porridge called sochivo. The food for breaking is also simple, millet porridge (some kind of cereal). Some of the soaked porridge and grains left in the straw under the religious symbols at home. That is to remember the gifts that the shepherds brought to the manger where Jesus was born. During 40 days of fasting, it is forbidden to say marriage.

Santa Claus in one of the most legend that people believe in the world, include Russia. There are grandchildren called Ded Moroz and Snegurochka, that also believed by the people. There also believed the legend of Babushka. Babushka is the Russian woman who met Jesus. A number of countries also have their own version of Santa Claus. In Russia, the figure of this friendly old grandfather is called Ded Moroz (Grandfather Ice). He was accompanied by his granddaughter, Snegurochka (Snow Virgin), giving gifts to the children.

Christmas and New Year in Russia are often associated with magical things. The tradition of excitement is not only in religious rituals but also of ancient Slavic beliefs. The Russian Orthodox Church celebrates Christmas referring to Julian’s calendar. This is also known as the “old style”.

When traced, the ancient tadisi was born in the pre-Christian era. Its when the worship of the sun (pagan) is still a major belief. Especially from agrarian societies that depend heavily on the sun and weather cycles to determine. Its when to start planting seeds and forecasting crops.

The celebration is as follows:

Moscow, displays extraordinary beautiful Christmas decorations throughout the city. Configuration of decorative lights of various shapes and colors is used as a tunnel on the road Bokshaya Dmitrovka. There is also a light tunnel with a Christmas tree arranged called againts gravitation. In addition, there is also a decorative ball of a giant Christmas tree with colorful lights placed in the center of the city. The visitors even  can climb the inside of the ball.

Another Christmas-related tradition is giving alms. This has been going on for centuries and involving people from all walks of life, from the Tsar and the nobility. In the 16th-17th century, every Christmas night the Tsar visited prisons and shelters to give alms to the inhabitants. Knowing the Tsar will pass and distribute the money, beggars from various quarters gather in Moscow. Read also another culture in Russia Russian Meal Time Etiquette

Christmas services in Russian Orthodox churches begin at night and last until dawn. When finished, the jamaats gather for a meal party with their family and friends. Throughout the day, the homes of the inhabitants were open to special guests who were uninvited but still welcomed, the singers of Christmas chants.

The Christmas Song is always very popular in Russia. The chants are meant to celebrate the birth of Christ and to hope for happiness and prosperity for the host. In return, the host – depending on how much he can afford – will reward singers with money or with homemade pies. Even Peter the Great has accompanied the singers of Christmas chants to noble houses and merchants to celebrate Christ on Christmas Day.

That’s some tradition Christmas ceremony in Russia. Christmas not only for nasrani nowadays. Most people in the world also have their own celebration in christmas. Whether you are Christian or not, visit Russia in Christmas day will be great. You can see a lot of unique decoration. The light festival is the best. Read Russian Balaika  for your knowledge.