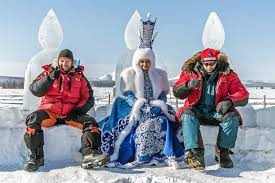 When is the great time to visit Russia? Russia is one of the coldest countries in the world because it borders the North Pole. Visiting Russia in the winter will be very special moment, that is a challenge for you. You can feel the coldest place in Russia, which is definitely an experience you will never forget. Besides winter, it is recommended to visit Russia in certain months. In certain months, there are many festivals in Russia. What Are The Festive Months In Russia? Get To Know Here!

From the name, we know that this festival is held in a snowy place. This festival is held in a city called Yakutia. Yakutia is called a city with a ‘world’ of snowy kingdoms. Yakutia is the one of the coldest city in Russia. There are some facts about Yakutia or Yakutsk. The temperature in this city is very extreme, reaching minus 70 degrees Celsius. The festival was also held in Omyakon which became the coldest region in the world.

In this festival, there will be an ethno exhibition. You will be able to try cold schticks which is a phenomenon that occurs at very low temperatures. In addition, you can see and attend ethnographic shows, national sports competitions, and various cultural exhibitions. Before taking part in this festival, you are advised to be in this place 1-2 days to adjust to the extraordinary cold in Oymyakon.

Actually, Woman’s day is celebrated throughout the world, not only in Russia. However, women’s day celebrations in Russia are quite pronounced. Women will receive bouquets of flowers from their colleagues, friends and friends. The men in the family will give flowers to his mother, grandmother, sister. In addition to flowers, the gift given can be a snack or candy.

This festival is an anniversary celebrated in Russia and some other former USSR countries on 12 April. In 2011, 12 April was declared as the International Day of Human Space Flight in dedication of the first manned space flight made on 12 April 1961 by the 27-year-old Russian Soviet cosmonaut Yuri Gagarin. Gagarin circled the Earth for 1 hour and 48 minutes aboard the Vostok 1 spacecraft. This festival is usually celebrated with a space exhibition. The festival is festive with fireworks at the exhibition center.

Religious celebrations in Russia are indeed sacred and lively. Since this country is a communist country in ancient times, the celebration of religious days is something very special. One of the big celebrations is Easter. How to celebrate Easter in Russia? Easter in Russia is celebrated almost everywhere in the country. Various corners of the city will hold various exhibitions, events and discounts on Easter day. Churches hold Easter events with many congregations attending. On Easter Day, families also visit each other and eat together.

April to May is one of the best months to visit Moscow, Russia. At the end of April to the beginning of May there is an exciting spring festival, Mozcow Springs Acapella. As the name implies, at this festival you can enjoy the biggest acapella music festival in Russia which also presents the best artists from various countries.

The Russian military showed off the latest technology in annual parades to commemorate the Soviet Union’s victory over the Nazis in World War II. Every year on May 9, Russia celebrates the Soviet Union’s victory over Nazi Germany. Besides have great history in Russia, there are amazing facts . At midnight that day in 1945, German capitulation documents were signed. Other Allied forces, such as France and Britain, celebrated the Victory Day one day earlier on May 8. Russian Defense Minister Sergei Shoigu led the march across Moscow’s Red Square.

Thats What Are The Festive Months In Russia. If you don’t want to feel the deadly Russian cold, it is recommended that you visit March to May. In that month, you can enjoy spring in Russia which must be very beautiful. Of course also because in March to May many major festivals in Russia. Don’t forget to enjoy your favorite food in Russia in the spring.