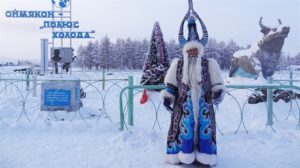 If you ever went to europe, whats makes its different from any other countries is the weather. If you are living in Asia, specially in Southeast Asia, usually you just have 2 type of season. Summer and rainy season. Europe is different. Since you go there, there are 4 types of season and each season and for me, spring is the best season personally. Well , what I don’t have in my country is the winter season. This type of season is fantastic, freezing, and times when the snow arrived. Winter is fascinating and I think every countries which have winter should grateful – until I know not all the country loves it.

The Oymyakon is one of few countries which hate the condition of their winter. Blizzards and snowstorms aside , Oymyakon has its own winter, and its different. Welcome to the world’s coldest city. Have you ever think that snowstorm, which is only happen about once per year, will come every single day of your life? Oymyakon is the answer. The combination of bizarre weather and frigid temperature creates the city that never face warm hot every single day. The Oymyakon is located just a few hundreds mile from artic circle, so here it is, the 6 facts of the Oymyakon, the coldest place in Russia.

1. Surprisingly it is the rich country

Don’t think the city which have the condition like this means face poverty, hard for trying supplies, and lack of resources. This city is different. Surprisingly, it is the cosmopolitan city which have every resource they want. Oymyakon have plentiful resources such as gas, oil, and diamonds. Wow, imagine you still found money while its cold.

The resources are really important for the villager and that will guarantee people to feed their mouth from work. The temperature of this city represents the strength and determination of the people who live here. Daily temperature of Oymyakon is -34 Fahrenheit. Remember, we use Fahrenheit, not the Celcius. So the temperature is super below even possible to makes you feel the permafrost.

Yes, people in oymyakon have their special rule for work. Usually for people like us, we will work 5 days a week, from 9 to 5. You wont find this rule when you’re here. Mostly people in Oymyakon will work two weeks and two weeks off. Pretty much holiday right? Yes, employees of isolated regional 24-hours are the vital matter which ensure the economy can keep running while the weather is not possible to work in such condition. People don’t have much option for work. Like I said before, usually they will work in several industry : oil, gas, café, market, and so on. Other people decided to out from Oymyakon and looking for a better job with better condition for work.

Well, Omyakon is cold enough even you don’t need refrigerator for cooling something. At the street market in Oymyakon, for the seller which provides stocks of seafood or meats, they don’t need any refrigerator to keep their things fresh. The weather are good enough to keep freezing the meats until they can be sold to customer. Pretty good isn’t it? Imagine you are in Public Market like Indonesia were your stocks of fish must alive or need bunch of ice to ensure your fish keep fresh.

On the way to Oymyakon, make sure you run your car even for a slowest thing. Gasoline can freeze solid if the vehicle is not left running and sometimes, when the driver are sleepy and tired, they will stop in the middle of the road and sleep in car with lights shining and the engine still running. Good enough to provide the car keep warm and not frozen. Some people even face bad day during a way In Omyakon. When your truck frozen, you have to torch to thaw the driveshaft of the frozen truck. We have to be careful when you do it – you don’t want to end your truck turn to ash , right?

4. Coldest place in the earth

When you think that arctic or Alaska will win the title of the coldest city in the world, think about it again. In 1933, the temperature of this city were downed to a -68 Celcius ! Because of the bizzare temperature, villagers in this city ever found that their public thermometer started to malfunction, failed to keep the correct temperature for their place. Weather in here is so bad even you just have 3 hours of daylight in Oymyakon. Its that enough for you to drying your cloth? Lol. Don’t ever think to play football, basketball, or dancing outside your home with naked cloth or thin t-shirt. You don’t want your body end with disease and any other cold ill. The Oymyakon is located near the Yakutsk. The place were eternal winter is possible. Don’t lose with the weather, use fur if you want to go outside.

5. They only have few people here

Since this city is the coldest place in the world, Oymyakon is a one city which is located remotely in Russia. Because of the remote place and inhabitat place in several points, there are 500 villagers which is live as normal, although they have harsh condition in here . To live and survive at their eternal winter, villagers will burning woods and coal every month. They have public markets, only one shop, and one solitary school. Because of the small population in here, they don’t need much shop here. Only one and that’s enough. For education, teenager will school in solitary school, and will shuts if the temperature reach below -52C. The remote place will considered the Siberian village to be the coldest permanently inhabitate settlement in the world. Because of the bad temperature and winter all the day, the cold in Oymyakon reminds me the wonderland, where the whole village are covered with eternal snow, white is dominant.

Ever trying to found out what is the meaning of the Oymyakon? Firstly, Oymyakon city was named by the River, the Oymyakon River, whose name reportedly comes from the Even word kheium, meaning ‘unfrozen patch of water’. However, some sources said that the Even Word heyum, means the frozen lake. For almost hundreds of years, this city is covered by the snow and the ice. Having the almost same characteristic of the Alaska, we are not surprising if the Omyakon was named because of the frozen lake, eternal snow, and so on.

Nature plays its role when its need. We have to be grateful when we have summer or spring season, or have the winter season which is good enough for us even for walking or playing making snowball. Enjoy the story and have a nice day!