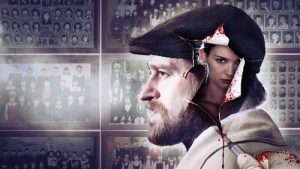 Watching TV series can be a fun and entertaining way to spend your me-time! TV series are usually more hooking than movies because each episode makes you more curious than before. Russia also has quite some good quality TV series nowadays. Not only do they have interesting plot line, you can also know more about Russian life and culture, while passively learning the Russian language! Here are our top recommendations for best Russian TV series on Netflix 2019 that you can enjoy in your spare time.

1. Silver Spoon, spoiled brat-turned-police discovers unsettling secrets from his past

Fans of crime drama TV series will love this one! Silver Spoon first aired in 2014 and is now a top-rated Russian series. In fact, it was the first Russian TV series to be acquired by Netflix, so it must have quite the quality! The story revolves around Igor, a spoiled guy with a lavish life who always gets out of any trouble he’s involved in, thanks to his billionaire father. When his father finally gets fed up with his acts, he is forced to be an apprentice cop.

The series unfolds as Igor becomes immersed in police work life and slowly reveals dark secrets surrounding the death of his mother, a case that has been buried for decades now. Aside from the interesting plot that will keep audiences hooked, this series also serves as a satire for the lifestyle of the Russian rich-and-famous and the country’s corruption problem. It currently has three seasons, so you’re not too late if you want to catch up!

2. The Method, detective by day and vigilante by night

Seems like Russian TV has a flair for crime drama genre. The Method, first released in 2015, is another series made in this genre. If you’re familiar with the American series Dexter, you might realize that this series is its adaptation. It’s produced by the same production house that created Silver Spoon so don’t doubt its quality! It’s about a Russian detective, Rodion Meglin, who is secretly living his life as a vigilante who hunts down Russian freed criminals to give them a taste of their own medicine.

Things get complicated when Meglin gets a new trainee, Esenya, with dark secrets from her own past. The two must cope with keeping their secret motives while working with each other as partners. So far, the series has won three awards including best TV series in 2016! It currently has one season and a second season is coming in autumn this 2019, so you got some time to start watching it just in time before the second one airs!

3. The Sniffer, a detective with an unusual skill

This one is a more fun Russian detective series. It was made in 2013 but was just added to Netflix in year 2017. Just like the title may suggest, this series is about a crime scene investigator who has a special skill in solving mysteries: his sense of smell! Watch how he uses his sense of smell for doing detective work, although many conflicts arise afterwards. With each new seasons, The Sniffer must face the reality that villains are getting more aware of his special ability and so get more cunning in escaping him. This show currently has three seasons with eight episodes each.

4. Trotsky, depiction of the life and struggle of a Russian revolutionary in Soviet era

Let’s switch from crime drama genre for a while and get to know this epic biographical TV series, Trotsky. If you’re into Russian history, you might be familiar with Leon Trotsky, the historical figure who inspired the creation of this 2017 TV series. Trotsky is one of the central figures of the Russian Revolution back in the day. In the Soviet era, it was even considered a taboo to mention his name! No wonder nobody made a work of art by his name until now. Even though it’s a mini series, Trotsky is a great series to learn about the deep and thrilling Russian history.

Trotsky was a survivor of a terrible attack by the order of his enemy, Stalin, who has sworn to end his life. Trotsky continued to be a hero in Russian revolution and his work was remembered through this series. Though there were mixed reviews of this series from critics, this series still won many awards, including Best TV series and Best Cinematography Award by The Association of Film and Television Producers in Russia. If you’re not too big of a fan to crime, mystery-thriller series, and enjoy historical Soviet movies, perhaps you should try this historical mini-series.

The Sniffer creators have also come up with this thrilling drama series! Airing since 2015, The Red Queen is a series that has received critical acclaim and great success especially in Russia and Ukraine where it first aired. The series follows the story of a famous Soviet model, Regina Zbarskaya, a woman with a mysterious life. Some parts of the storyline are inspired by actual Russian historical events such as the Christian Dior fashion show in Moscow back in 1959 and the trip of the Soviet Fashion House to Paris. The Red Queen’s true identity has always been a question, whether she’s an ordinary fashion model or something else, such as a secret agent working for the KGB. Well, you’ll have to find out this top-rated TV series to find out for yourself.

Those are the 5 Best Russian TV Series on Netflix 2019. Have you placed them on your watch-later list, or are these new to you? These are top-rated TV series with awesome quality, so you can pick any of them depending on your favorite genre and give them a try! It’s a great way to start improving your Russian vocabulary while getting new knowledge on Russian lifestyle, history, and the amazing Russian culture. While you check out these series, don’t forget to also take a look at these must watch Russian movies or play these top Russian video games.