Kazan is the capital city of The Republic of Tatarstan in Russia. This city is not only famous for its biggest population, but also for its economics, politics, science, culture, sports, and religions. Its sports center is so famous that Kazan has been appointed to host many sports events. The European weightlifting championship, summer Universiade, world fencing championship, world aquatic championships, red bull air race world championships, and one of the most popular sports events, FIFA confederations cups, are all of the sports competition that made this city earned the position as Russia’s sports capital.

There are more than a million people living in Kazan. Among the population, there are two major ethnics which are Tatars and Russian. Tatars are people who originally come from the Volga-Ural region while Russians are people who come from eastern Europe. Since those are the biggest ethnics of society, their languages are also the one widely spoken in Kazan.

The religions represented in this city is diverse. There are Roman Catholicism, Protestantism, Judaism, the Baha’i faith, and the most dominated are Sunni Islam and orthodox Christianity. There was a dark time in Kazan. On the 1500s, many mosques were destroyed and Tatars population who survived were moved 31 miles from the city. Destructions happened all over the city that caused most of Kazan was ruined. The whole condition changed significantly when Catherine The Great ruled Russia. She declared that the rebuild of mosques in Kazan must be done and as a result, Marjani Mosque stood as the first mosque.

Other than Marjani Mosque, there are at least eight other mosques in Kazan. The built of these mosques are with the purpose to provide a place of worshipers for the Muslim community that grows annually. One of the mosques constructed in the 1800s is Soltan Mosque. There are some unique facts about this particular religious place.

There are some unique facts about Soltan Mosque

Masjid Soltan was built in 1868, located specifically in the street of Ulitsa Galiaskara Kamala and Ulitsa Gabdully Tukaya. In the Arabic language, Soltan is the same as Sultan which means “king”. It is then used to call an Islamic king or leader. In the Russian language, Masjid Soltan is also called Masjid Sultanovskaya. This mosque was built as a dedication for a Sultan who was ruling Turkey at that period of time. The building process of Masjid Soltan was funded by Ziganshi Usmanov. He was a Tatar merchant whose name was also used as the name of this mosque. Until now, people commonly know this mosque as Masjid Soltan or Usmanov Mosque.

This mosque did not only function as a place for worshippers to gather and do religious activities. It has also had an important role as a cultural place. It was a place to live for Kazan dramaturge called G. Kamal and for several years, it provided accommodation for a Tatar newspaper’s editorial office. There was some time when this building stopped operating in 1931. Its purpose changed into leather manufactory until the mid-1960s. after more than 20 years of not functioning as a mosque, this building was identified as a monument of architecture. Thankfully, in 1994, the ownership of the mosque was back to the Muslim congregation. During the same period of time, in the same area as the mosque, a madrasah was built. This school provided education with Islam as the base of the system. This mosque is existing and operating until now.

Masjid Soltan is easy to recognize because of its turquoise color. This building was designed with a mixture of style between the Tatar-Bolghar medieval architecture and national romance style. The Medieval architecture of Tatar-Bolghar was inspired by Bolghar, a place widely known as a destination to visit some world heritage. This city shows the traditional culture of Tatar which travelers can enjoy through the architecture of its building. The medieval style of not only the mosque but also of nature is something that cannot be walked passed. On the other hand, the national romance style is a style of architecture influenced by the curved lines of flowers and plants. 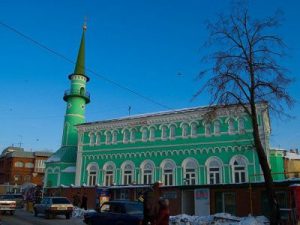 This mosque is with a hall with entresol. A hall serves the main function as a place for people to pray. For Muslims daily five-time pray, they do not have to do it in the mosque, but on Friday, Muslim men must gather to listen to the sermon and pray at the hall. While the hall is intended for men, the entresol or a mezzanine floor, which located between the first and second floor, can be used for any purpose. For example, it can be used as women’s worship galleries.

Besides the elegant flowers and plants lines inspired design, in the inside of the building travelers can also enjoy the view of many wooden statues. as a show of honor to the sultan, there is also a beautiful shrine placed inside of Masjid Soltan. Another thing visitors love to do besides admiring the interior is going up the 10-meter tower of the mosque. going to the other side of the huge walnut door, at the top of the tower, they can admire the sight of Kazan. This unique fact must be remembered so the next time you come to Masjid Soltan, make sure to climb the tower to gain the sight of Kazan from a unique place.

There are some places near Masjid Soltan that people can visit. For a starter, there is the central market where visitors can find many things. Fruits, vegetables, local honey, and meat are some of the things to find in the main building. Behind this building, people can also find interesting goods, like clothes and shoes. This place is a good place to experience the feeling of Tatar Bazaar.

There are also many restaurants that offer a variety of delicious foods. If you want to eat some Russian and European food, you can go to Tatarskaya Usadb. This place also has a wide variety of prepared foods, like cheese and salad. If you would like to eat some Turkish or Middle Eastern food, you can have them at Sultan Kebab. There is also another restaurant called Dom Tatarskoi Kulinarii which will serve you a variety of soups and eastern Europe cuisine. For Asian meals lovers, Rubai, which only 1 km away from Masjid Sultan, is specialized in Asian culinary. Muslim travelers do not need to worry. These restaurants are all certified as halal.

These unique facts about Masjid Soltan are important to remember. Your next trip to Kazan, put on Masjid Kazan and the places nearby to the list to gain a special experience.