Kazan is a city in Russia which is known as The Third Capital of Russia. The city that has an important role in economics, politics, cultures, and religions is also famous for its predicate as one of UNESCO’s World Heritage Cities. With various religions represented by Kazan’s people, Kazan has an architecture block called Universal Temple, where all places of worshippers are standing here. Orthodox church, mosque, synagogue are just some of the examples of building in Universal Temple. The block that was built in 1992 has been one of travelers’ destination.

Russia, in general, is recognized as a country where Muslims develop significantly. Most Muslims in Russia’s demographics are from Kazan, where Islam and Orthodox Christianity is a major religion. The Muslim community is provided not only with facilities to pray but also with Islamic education they can get from Russian Islamic University, the first official Islamic university in Russia.

As it is been said before, with a big number of Islam followers, the mosque is not hard to find in Kazan. One of the mosques in Kazan is Iske Tash Mosque. There are some things about this particular place that we should know.

Things You Should Know About Iske Tash Mosque in Kazan

These are a few things you should know about Ishke Tash Mosque in Kazan:

Iske Tash Mosque is a mosque established in 1802, funded by a rich merchant Gabdulla Utamisev. Before names as Iske Tash Mosque, it was known as The Ninth Cathedral Mosque and The Big Stone Mosque. Until now, this mosque is still operating.

In 1552, there was a battle took place in Kazan, called the siege of Kazan. This was the final war between Khanate of Kazan (it used to occupy the state of former Volga Bulgaria, now Eastern Europe) and Muscovite Russia (Moscow natives). This war caused thousands of casualties, including civilians. Tartar leaders then got permission to bury them in the Muslim manner. The victims of The Siege of Kazan was buried in a communal grave that was marked by a big old stone which in Russians language is Zur Iske Tas. This was the site that later used to construct the Iske Tash Mosque. Until now, the big old stone is still standing in the east front of the mosque.

At the end of the 1930s, the central executive committee of Tatar Autonomous Soviet Socialist Republic decided to close the mosque. after that, this building served with another function. There was a time when it became school and later, in the era of the soviet union, as storage. Finally, in 1994, the mosque status was active again and its function restored for the Muslim activities.

The Iske Tash Mosque consists of two levels. If you want to enter this mosque, you can find the entrance on the northern side. Once you get inside, you will find the entrance hall which also exists on the second floor. On the first floor, you can find stores while the second floor is where the two praying halls are located. You can walk through the three flight stairs to get to the second level of the Iske Tash Mosque. The two praying halls on this floor are separated by a thick wall and doors. In this floor, you can climb another staircase that will lead you the minaret. 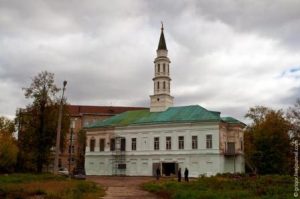 In general, the mosque was built in the style of classicism traditions which is clearly shown by the minaret that standing at the center of the roof. The minaret consists of three levels of structure with a thick cross wall all over it. The shape of the minaret is influenced by the minarets in the medieval towns of Bolghar and Kasimov. Both towns are famous for their old style. The placement of the minaret, in the center of the two sloping sides of the roof, is believed to be inspired by the traditional concept of Tatar rural mosque. The style of the Iske Tash Mosque was designed by Alexander Schmidt. He is among the most notable architect of the 19th century.

After visiting Iske Tash Mosque, you can also find many interesting places nearby. For example, if you want to enjoy beautiful designs of other mosques, there are some mosques nearby, such as Acem Mosque and Bornay Mosque. Acem mosque, in particular, is known as a distinguished cathedral mosque. Both of these building were influenced by the style of national romance eclecticism. Another example is the Zangar Masjid. This one is famous for its blue color.

If you are interested to see a mosque which style is a combination of Tatar-Bolghar medieval architecture and national romance style, you can visit Soltan Mosque. it is only less than two kilometers away from the Iske Tash Mosque. the last but not least mosque to visit is Nurulla Mosque. Located near the Sultan Mosque, you can enjoy the details of the design that was adapted from the style of medieval Bulgaria and the middle east.

Do not forget to taste the restaurants nearby. With an average cost of $10 up to $20, you can enjoy a meal served in any restaurants nearby. You do not need to worry because each restaurant offers a different kind of cuisine. If you want to know the real taste of Russian meals, you can eat at Dom Tatarskoi Kulinarii. If you want to eat Asian meals, Rubai will serve it to you. But if you are worried that the local cuisine is not suitable for you, you can always eat fast food at Chak-Chak. All of these halal restaurants are very easy to reach. They are all only one or two kilometers away from the Iske Tash Mosque.

These are some of the things you should know about the Iske Tash Mosque. After enjoying the beautiful view of the mosque, do not forget to also visit the places nearby and enjoy the cuisines.