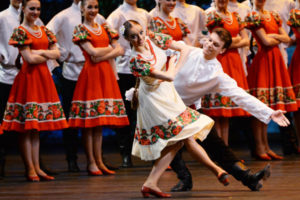 Russia is so diverse in term of culture. It’s not boring living in the country as the many cultures will be ready entertain. There are so many cultures in the country. Those start from dance, music and other shows. All of them are so enjoyable to see and watch.

There is no ending talking abut Russian culture. Thus, why don’t we start studying 7 traditional folk entertainment that Russian enjoy so much. (Read: fascinating souvenirs from Siberia and bread and salt in Russian traditions.)

There are so many folk groups in Saint Petersburg. However, the most famous one in the city is Feel Yourself Russian. The group play at Nikolaevsky Palace which is a huge and beautiful building. It used to be the house of son of Emperor Nicholas I, the Great Duke Nicholas.

Russians can enjoy the show for two hours every day. Although it is a bit long, there is a break within the hour and the audiences can enjoy drinks and snacks that include vodka, wine, champagne, soft drinks, caviar, salami and cheese.

A dance with acrobatic quality? Who want to miss that, even a Russian won’t although s/he lives with it. Moreover, people all around the world will surely know about it. With vigor, color and joy, all of people seeing the performers’ move will be mesmerized. Moreover, they perform it with a lot of enthusiasm in colorful handmade costumes that blend so well with the moves. They can do variety of traditional Russian dances and  Gypsy dances.

Barynya means “landlady.” It is one of traditional Russian dances that combines dance moves with chastushka. Chatushka is a traditional folk poem that is frequently in the form of satire. The dance itself does not have fixed move. It merely a combination of spirited moves that include stomping and squatting. The performers will also repeatedly says “Barynya, barynya, sudarynya-barynya” which means “landlady, landlady, madam landlady” throughout the dance.

Komi dance is a traditional dance coming from North Russia and Northwestern Siberia. In addition to being traditional, it is a national dance. It involves more than 20 people, males and females. During the performers do their move, there are some people singing in “Uralic” language family. In each move, the singing people will repeatedly clap their hands into the melody and then stop and do it again. While the dance itself include, some tapping and moving in circle. Overall, the dance describes about the community which happily living together. They build trust and care of each other. This dance will surely makes everyone seeing it happy.

Tatar is the largest community in Russia. It occupies 5.5 millions of the whole population in the country. Tatar is a Muslim community from Turkic descent. With such number there are so many Tatar subgroups that are parts of Turkey, Ukraine and Central Asia and the largest of the group being Kazan (Volga) Tatar.

The dance begins with slow music that what sounds like Chinese music. Then two groups of people, men and women appears doing some moves in their own groups in full dresses. Before the groups turn into couples the slow music changes into music full of spirit. Then, they moves in couples, one person shows up, and two and several others and then become couples again. The dance itself looks like telling daily activities of those people.

Ingush people are native to North Caucasus. The dance can be described as a dance of two people. While the rest are just being there clapping and witnessing their moves.

First, a man steps up and a woman comes up in full dress. Then, they approach each other and move here and there slowly, enjoying each other’s presence. As the time passes, the moves begin faster and the music becomes livelier. It is seen from the way the man tapping so many times fast.

Russian folk music dated back from when Slavic tribes first time settled in Russia. The tribes are famous for their love and mastery of music. They can play the music instruments, as well as dancing and singing. That was the beginning of folk music in Russia.

There have been so many folk songs since then. Then, Nadezhda Plevitskaya came as the founder of folk songs performer. She had gathered, adapted and sang about 800 folk songs. She then inspired other people to become folk song performers, including Lidia Ruslanova, the Queen of Russian Folklore. Through her marvelous talent, many people can remember Russian folk songs very well. She then became the symbol of Motherland and her voice encouraged soldiers during the Great patriotic war.

Today, Russian people enjoy when famous singer Zhanna Bichevskaya sang some folk songs. She sings so many type of song, including peasants’ labour and ritual songs; comic songs and mournful songs; town songs and ballads with their disastrous passions, fervor of feelings, love and death. In addition to those many singers, there are so many Russian folklore ensemble that also bring Russian folklore spirit into the stage. Also read: get closer to Russian language with music.

Those are 7 traditional folk entertainment that Russian enjoy so much. You can also read old Russian cuisine as part of their culture.