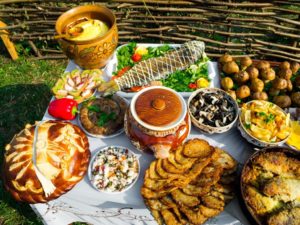 Covering a staggering area of 17.1 million km², Russia is the world’s largest country. It borders a number of European and Asian countries, as well as the Arctic and Pacific Ocean. With over 300 cities and towns, Russia sure has a variety of local culture and traditions. But one thing that is true nationwide is the acceptance of old Russian cuisine as part of their culture. Like The Meanings of Flowers in Russia, there’s also a story behind old Russian cuisine.

Records From the 16th Century

Researches have found that Russian cuisine during and before the 16th Century was rather simple and natural. Unfortunately, there aren’t many recorded information of exact recipes from these period. But due to Russia’s geographical and natural conditions, they have lots of lakes, rivers and forests. This resulted in the abundance of fish, meat, berries and mushroom in old cuisine.

In these early centuries, Russians made a lot of noodle and black bread from dough. In 1547, the first cookbook was known to be published. However, there were only a handful of dishes, while the exact way of preparation and cooking were not clearly outlined. Kasha, or Russian porridge, has also always been a traditional dish that was consumed by children and adults alike.

Russian Cuisine of the 17th Century

Russia’s conquest of Astrakhan, Bashkiria, Kazan and a part of Siberia had introduced Tatar dishes to the Russian cuisine. These are the famed Russian noodles and pelmeni, or meat dumplings. During this period, Russians also developed the habit of drinking tea, which later become the national beverage. Alcoholic drink like vodka wasn’t introduced until later from China.

Furthermore, Russia imported an array of spices in the 17th Century. This resulted in the addition of new bakery recipes, such as cake and pastry.

Change in the 18th Century

Even before, hunting was an extremely popular sport among the nobility. This brought a lot of fish and game, or hunted meat, to the noble plates. Fish and animals were often cooked as a whole and dinner could last up to 8 hours as dishes kept on being served.

The Russian cuisine really changed in the 18th Century, when aristocrats started employing foreign cooks, especially from France. They gave a fresh understanding of the old cuisine and made it custom to serve dishes in turn, instead of all at once. This is now The Russian Meal Time Etiquette. Moreover, these French cooks proposed the cutting of meat and fish into smaller pieces before cooking them. They also introduced thick soups as well as lighter dishes which used less fat and wheat.

Like their affects on Wedding Tradition in Russian Orthodox Church, the Orthodox Church also influenced old Russian cuisine. They prescribed a schedule which forbid the consumption of meat and dairy for 216 days a year. Thus fasting was an integral part of a traditional Russian life. Modern Russia has come to embrace old Russian cuisine as part of their culture, with the following common ingredients for a typical meal.

Back in the days, fish was an important part of the Russian Orthodox diet. Fish was especially crucial during fasting days when people were not supposed to eat meat. Therefore, different types of fish were pickled, salted or smoked, and served as a snack before meals. Today this dish is known as zakuski.

On a Russian dining table, you could almost always find some sort of bread. The most popular type is black bread, or what we may know as rye bread. This traditional staple food is also a symbol of prosperity and health. Bread in Russian Culture is more than just a meal ingredient, it is widely respected by the people for its history. They are served in important occasions, including wedding and funeral ceremonies. Sometimes, it’s also part of the Traditions and Customs Of Russian Easter.

Who says that pies are just an American dish? Russians have been making and eating them for many centuries as well. Pirozhki are a type of stuffed buns made out of short pastry and can be enjoyed as a savory meal or sweet treat. The fillings vary from meat, rice, egg, potato and mushroom to cottage cheese, stewed fruit and jam.

Have you ever heard about Beef Stroganoff? Well, this world famous dish actually originated in Russia! It is sautéed beef cuts with generous amount of sour cream sauce. Nowadays, a lot of people serve stroganoff with either rice or pasta, and many variations have sprung up.

The cooking and consumption of soup in Russia dates back to as far as the 9th Century. An example of the most widely eaten soup is borsch, a beet and meet soup often served with sour cream. Shchi is another common variation of hot soup, made of cabbage, mushroom, meat and flour. This soup is usually enjoyed with black bread.

In short, although the Russian cuisine started in the 10th century, not many records of those medieval dishes can be found. We know that the Russian plate has become more complicated and refined as time goes. Yet some old recipes still remain, including black bread and pies. Traditional beliefs and lifestyle have also made the modern day people to adopt old Russian cuisine as part of their culture.