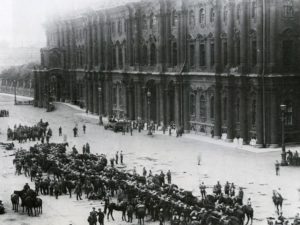 No one can spare winter palace from ruin. We have previously informed that the palace received restoration. Thus, there surely be something that urges it. The urgency that urges government to restore winter palace does not come from the fact that it was already old. Nor the fact that it received some impacts of disasters. One thing that urged the restoration was the 1917 Russian Revolution. There are 6 facts of Winter Palace and Russian revolution. You may check another revolution here.

The tragedy began in the evening when Vladimir Antonov-Ovseenko led the storm of Winter Palace. The revolution was to seize Tsarist power in Russia. This revolution led to the rise of Soviet Union.

Russian Revolution was actually an aggregate of two revolutions. The first revolution began in February (or March according to Gregorian calendar). It was when Russian collapsed after the abdication of Nicholas II and Provisional Government replaced the regime. The second revolution was the October Revolution. It was when the government in weak position and could not bring any change to betterment of Russia.

Due to the government incompetency and incapability to rule Russia, people were not willing to take side with government. Even soldiers were unwilling to go to the front during World War I which was still raging on. They took part on the revolution, instead. With the help of more troops, Vladimir gradually seized all over the city surrounding Winter Palace.

The first attempt to take over Provisional Government headquarter, that once called Winter Palace, failed. Failure by failure arose the strength of the government. Both parties had suspicions on each other’s motives. However, leader of the Provisional Government Alexander Kerensky called Bolsheviks. He urged the people to defend the city of St. Petersburg from the possibility of a military coup. He even provide the party with his armies. Thus, the Soviets gained the power. The power that represented workers and peasants. Alexander then left Petrograd in the morning to gain more supporters from loyal regiments in the front-lines. However, his attempted caused his soldiers grew thinner until there was none left on his side.

3. Calm Before the Storm

The remaining government tried their best to protect the key buildings under their power. However, the only building remained was Winter Palace. They used the palace to its maximum utility by moving in and out people they could. The mobilized people included junkers, the call of students at military schools and a women’s battalion. According to Russian historian Yulia Kantor, the number of soldiers patrolling in the palace to mobilize people was around 500 to 700 soldiers. They left the palace and came back to pick up some other people from time to time.

By the evening, Bolsheviks supporters who named them as Red Guards surrounded the palace. At around 9 P.M., the Aurora cruiser released a blank shot that ordered those supporters to begin the attack. Based on the result, the attack was relatively bloodless as a women’s battalion and military cadets or yunkers residing in the palace barely resisted. All people residing in Winter palace gave up the palace.

Since the fall of the monarchy, Winter Palace became government headquarter and a hospital as well as the palace has so many wide spaces. Many soldiers who were wounded as the result of battling in World War I were taken there. Some of the wounded soldiers were dead when Bolsheviks began bombarded the palace.

Despite of the loud bombarding, Bolsheviks took over the palace quietly. They sneaked into the palace through the unguarded open gate in the back. After several hours checking all rooms in the palace, they found all ministers were holding a meeting in a certain room. Thus, Vladimir arrested them. He also announced that the party would provide safety if those who defended the palace would lay down their arms.

After arrested the ministers and promised all people lived in it with protection, Vladimir opened all the doors and gate of the palace. Thus, the remaining troops waited at the outside stormed the palace. They checked every room, from wings to wings. Then, they found a corridor with staircases that led to a wine cellar. Besides containing wine, the cellar kept a lot of goods, including fine carpets, curtains, linen, porcelain plates and glassware. Soon, those soldiers battling each other to obtain those fine things.

They battle stopped when one man shout that they were not allowed to steal those things. He continued saying that those properties belonged to the people. He also urged those soldier not to act like thieves and bandits as they held “Revolutionary discipline.”

Regarding the wine, Vladimir instructed soldiers to crushed those barrels of wine. He ordered it to prevent heavy drinking among them. Thus, the red wine flowed through the streets and disappeared down the drains that looked like as if blood spilled during the fight.

Those are 6 facts of Winter Palace and Russian revolution that you need to know.