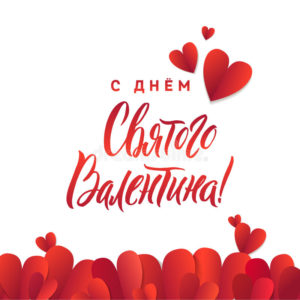 Russia is renowned for its highly intellectual thinkers and writers. This geographically vast country is the motherland of Dostoyevsky, Tolstoy, Pushkin, Anton Chekhov and leaders like Stalin and Lenin. You may expect that Russia will have its own unique tradition in regard to Valentine’s day, especially concerning its long legacy of cultural heritage. But it turns out that the culture of Valentine’s day in Russia is not much different than what we may already be familiar with.

Of course! Russian people are fond of romantic gestures and Valentine’s day is the perfect day to showcase their affection. Although some people go all out in expressing their love to their significant others, some choose not to make a big deal of Valentine’s day. After all, they know that they don’t have to wait for February 14th every year to cherish and serenade their loved ones.

In short, the culture of Valentine’s day in Russia is a well-regarded one and enjoyed by all sorts of people. Nevertheless, there is no specific tradition unique to the Russians alone associated with this holiday. Gift giving and asking your beloved out is much like everywhere else in the world.

We’re familiar with this famous tradition of gift-giving and expressing our love. But how did Valentine’s day first came to be? Who is this St Valentine that we so respectfully commemorate a day of the year for? There are several stories differing from one another concerning the mysterious origins of St Valentine. One legend claims that Valentine was a priest in third century Rome, when military soldiers were banned from marrying and having families. Valentine thought it was an injustice rule, and so continued to help young lovers by secretly conducting their marriages. When he got caught in the act, the noble priest was sentenced to death.

Another story contends that Valentine died for helping sneak imprisoned Christians out from horrid Roman jails. Before his death, many believe that Valentine wrote the woman he loved a letter. It was the one that he affectionately signed with “From your Valentine”. This is the expression that many still use today. Though no one really has the answer to which story is the true one, in all of them Valentine is painted as the same man. A heroic figure with sympathetic morals and a knack for romance.

February 14th was declared as St Valentine’s day back in the 5th century, but only later did this day become associated with love and romance. And even then, the majority of Russian people did not recognize this holiday. But after the USSR collapsed in 1991, Valentine’s day began to gain popularity among the common Russian population. So it is safe to say that this holiday is quite new in the grand scale of things.

Just like the rest of the world, Russian people really make the most of this lovely day. The Celebration of Valentine’s Day in Russia is not necessarily unique to Russian tradition, but it is still widely appreciated and honored. A lot of people prefer to spend this day with the people they love, most notably their significant others. Though some may think that partners and spouses are the subject of this holiday, many like to celebrate friendships and familial love too!

So what are the most common ways for Russians to convey romantic feelings and love? How does the culture of Valentine’s day in Russia resemble the ones we already know? Dates, lots of them. Going out for a fancy candle light dinner. Staying at home while watching a romantic movie. Cooking dinner together. Sipping exquisite wine and reminiscing memories. In short, Russian people are never short of romantic ideas to spent this special day!

Of course, there are lots of gifts both given out and received. Flowers are the most popular gift during Valentine’s day, yet this frequency does not diminish its worth. Men and women alike still consider giving another person a flower as a romantic gesture. This includes flowers like the classic rose, mixed bouquets, sunflowers, carnation, lilies, tulips and even succulents!

Moreover, other famous gifts are chocolate, heart-shaped greeting cards, handwritten love letters, custom mix tapes, paintings and even books! There aren’t a shortage of list of things to give. Especially when it comes to surprising loved ones and making them feel special.

All in all, the culture of Valentine’s day in Russia is quite a lot like the culture most of us are accustomed to. From giving flowers and chocolate, confessing their romantic feelings and declaring their love, Russian people are fond of this annual tradition.

Now that you know how the Russians celebrate the annual St Valentine’s day, are you even more interested? If you’re suddenly considering to spend next year’s Valentine’s day in Russia, why not check the Best Time to Visit Russia? After that, make sure you’ve mastered these Tips to Do Cheap Travelling to Russia and learn some Pick-up Lines to Approach Girl in Russian. Once you get the girl, you can try out the Most popular phrases to use when dating a Russian.