Snacking is a favorite pastime of many people. Watching television, playing games, reading bestseller novels, or even working in the office are not complete without some snacks on hand. However, sometimes, we would feel bored with ordinary snacks like crisps, biscuits, and chocolate candies that are commonly found in the neighborhood’s grocery stores. In these cases, do you want to taste something new? Savoiardi will be a good choice.

Savoiardi are more commonly known as “Ladyfingers”, a type of dry and sweet sponge biscuits that are made in the shape of big fingers. They are also called Sponge Fingers in the UK, Boudoirs in France, Löffelbiskuits in Germany, Bishkoti in Bulgaria, Vainillas in Argentina, Soletas in Mexico, Cat’s Tongue in Turkey, Kue Lidah Kucing in Indonesia, and Damskiye Palchiki in Russia.

Historically, Savoiardi are developed in the late 15th century in the Duchy of Savoy, a state in Western Europe that is situated between France and Swiss Confederation at the time. It is first created in honor of the King of France’s visit. Later, it is recognized as an official biscuit of the Duchy of Savoy court and being offered to guests from abroad as a flagship for domestic cuisines. Most people nowadays think that Savoiardi are Italian specialty, but in fact, they come from France! 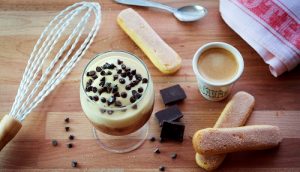 As time goes on, the influence of Savoiardi spreads all over the world. Savoiardi by themselves are soft enough for baby and children. But they are not only eaten as is. Adults may prefer Savoiardi dipped in melted chocolate, coffee sauce, or decorated with sugar icing. They are firm enough to be brought everywhere for souvenir and charity events. Savoiardi also become main ingredient for some decadent chocolate cakes that will make you melt, such as Italian Tiramisu, Fruit and Chocolate Trifle, and Russian Charlotte Cake.

Savoiardi soaked in coffee sauce made from Espresso and rum (or other liqueur) are used as cake base for Tiramisu and Trifle. Otherwise, they can be lined up inside the perimeter of baking pan to make the outer layer of Charlotte Cake. Of course, you can substitute it with other types of sponge cake or even stale cakes, but the result won’t be as good as the ones made with Savoiardi.

Be it Tiramisu, Trifle, or Charlotte Cake, they are known as the symbol of romance. No romantic dinner on Valentine’s Day or Wedding Anniversary celebration is complete without any one of the aforementioned cakes on the table, baked with some light liqueur and decorated beautifully with a lot of sugar frosting at the top. In preparation for when the special occasions grace your house and in order to stockpile some snacks to watch the TV, let’s learn how to make Savoiardi.

How to Make Savoiardi?

Just like any other biscuits, making Savoiardi can be easy for some people, but also can be difficult for some other. What should be remembered is the proportion of the ingredients and the strength used when you are mixing the batter. If you reduce or increase the proportion too much, then the Savoiardi may become more fragile or on the contrary, too hard. Therefore, for the first trial, just use the exact proportion. This recipe can be used to make 30 fingers and will be done in approximately an hour.

As mentioned previously, Savoiardi can be served with dipping sauces. They can be quite messy if consumed by children, so this recipe is especially for adults who think that Savoiardi will be a good choice to accompany an afternoon chat or some other activities.

This is very easy, right!? Get your friends to make them together while chatting about some controversial Russian TV Series, debating the latest sport competitions, or gossiping rumour du jour of beautiful and talented Russian female singers. You can also use the same dipping sauces (without strawberry) to decorate the Savoiardi. Let it dry, then store them in an airtight jar. They will last for a week or so if not stored in the fridge.