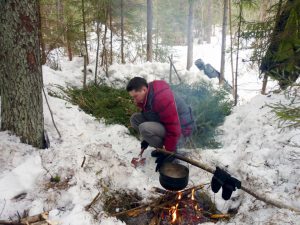 The weekend is perfect to snuggle in your bed and read a book or binge-watching TV series. If you’re tired with Netflix options, why not trying to find the less popular but equally good movies or TV series from Russia. There are many choices, from Russian cartoons to Russian popular movies.

For TV series, don’t you know. like many other countries, Russia has several shows that are controversial and raising public strife. Let’s see what are those TV series.

If you’re familiar with the movie Hunger Games, you know that contestants have to do all it takes to survive. The battle in the Hunger Games is a matter of life and death. Game 2: Winter is a reality TV show which adopts the concept of Game of Thrones. Although Game of Thrones is merely a movie, Game 2: Winter is a reality show, so it’s not only a fantasy.

The TV show is set in the cold land of Siberia. The participants will need to fight bears and wolves in order to survive. They also have to endure the temperature that can go minus 50 in winter. The producers also further explained that it’s possible for the participants to get bodily harmed.

The participants will be equipped with a mere knife and one single set of winter clothes to survive through 8 months living near Ob River. As for the competition between the contestants, the producers said that they will not intervene should murder or rape happens. Everything is allowed, smoking, alcohol, fighting. There will be no restriction.

The plan for this TV show includes 2000 cameras and 24/7 live broadcast on several websites, local and international.

Game 2: Winter was attracted worldwide attention. A major publication such as The Telegraph and New York Post made articles about this TV show. However, it turned out that the whole thing was fake. Without explaining further, the producer said that the plan was some sort of market research. It sounds fishy, however, since the press release was well-written and some audience actually had bought a ticket.

Sleepers is a spy drama that many people accuse it of being imitation to another TV Series The Americans. The bad guy here is the CIA. The story is mainly about the CIA’s intention to activate an American sleeper cell in Moscow. The USA agency also further planned to destabilize the country. The first episode begins with an attack on the Russian embassy in Libya.

The show garnered many controversies because some people think the show justifies Kremlin’s aggressive intelligence operation abroad. Although the showrunners insisted that similarities in characters stories were purely coincidence, a keen eye would sense the unmistakable reference to real-life events and characters, such as the opposition leader Alexey Navalny and journalist Anna Politkovskaya.

The liberal is afraid that the TV series halt the progressiveness of Russia politics which in recent years has shown quite an improvement. Another controversy is the copycat status. Many regret Russian entertainment for its lack of creativity. Almost every of their pop culture products, especially TV series, is either inspired from British or American TV series.

Russian teenage drama School portrays daily life in a Russian high school. Some people say this TV series is too much and exaggerating things. Students are depicted smoking, drinking at school, bullying other students and showing disrespect toward teachers. Some people describe School as a radical portrayal of teenagers.

People who disagree over this series are afraid younger generations will pick up bad behaviors depicted in TV series. There are a lot of concerned parents and teachers who think the series can be a bad influence on their children and students. Many people describe it as “outrageous” and “shocking”

Audiences who are on the TV series’s side argue that the show will raise awareness of the current situation of the Russian school system. Although exaggerated, many will agree that teenage delinquency depicted in the series has indeed happened on a regular basis. The supporters of the show also argue that it won’t inspire students to behave badly.

Better than human raises controversial questions regarding artificial intelligence. It this technological advancement truly good and beneficial for humanity? The sci-fi TV series revolves around the future of humanity, where robots are no longer a strange thing. They live with us, they work with us. They start to have emotions and feelings as we do.

Better than Humans is a Russian TV series under the banner of Netflix Original. So if you’re looking for a Russian TV series that’s easy to find, you can directly head to Netflix to watch this show. It’s perfect for anybody who’s also a fan of science fiction, especially artificial intelligence. There are also other facts about Better than Human and reasons why it’s a must watch that’ll make you impatient to watch it.

More phenomenal than controversial, Ekaterina is a Russian soap opera about the life of Empress Catherine the Great. Released in 2014, the show has two seasons and 24 episodes in total. Like your typical palace opera, there are many intrigues young Catherine must face when she start a life in the Russian court.

This TV series is popular in its home country, receiving awards and praises for costume designs and acting. The first season won an award Golden Eagle in the category “best television series”. It regularly sits at the top of the rating chart for TV shows. The third season is coming soon in 2018.