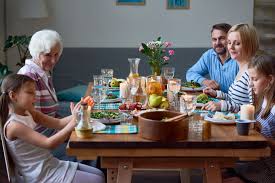 Even with the influence of global culture entering almost any country, including Russia, the Russian dining culture stays relatively intact from the influence, with a select few instances of adopting Western dining etiquette. Due to this, it is possible for visitors to be confused or overwhelmed during their trip as sometimes the rules may seem superstitious or even strange.

Getting invited to a meal is considered one of the most important social events in Russia, and the mistakes made by oblivious visitors may seem small but can greatly affect one’s reputation. In some places, dining even has an almost supernatural meaning, carrying an aura of acceptance as ‘one of us’ similar to the Russian Banya ‘ritual’. Here are four Russian dining etiquette that you should know.

As said above, getting invited to someone’s house for a meal is an extremely great honor. This has been mentioned in past articles, but it is absolutely vital to show gratitude for this honor by dressing nicely and bringing a small but thoughtful gift. Wine, cake or fruits make great gifts, and for houses with children, getting something for them will give you some good points in their book.

Some might think to decline the invitation for the sake of politeness, do not do this as it will backfire and the host or hostess will get extremely offended for refusing what is viewed as one of the ultimate acts of hospitality in Russia. After you agree, please do not be late. Come right on time or if there is an absolutely pressing matter, do not be late more than 15 minutes.

Men are expected to socialize with other men and set the mood for the mealtime. Meanwhile, women are expected to offer help for the host or hostess, which would most likely be accepted. After the meal is served, the men are expected to treat the women guests well, by helping them with small tasks such as cutting the bread and pouring the drinks, and the women cannot refuse this service.

Breaching this is a social faux pas, and sometimes might result in an awkward silence as crossing the cultural barrier is not as common in Russia compared to other European countries.

Many steps of the actual meal time require the permission of the host, so watching your movements is advised. Russians table set-up is similar to common European set up, with a fork held in the left hand and a knife in the right hand, along with an ‘appetizer bowl’ when there is an appetizer. Keep your hands visible, but do not put your elbows on the table. Wait for the designated person to serve you. Commonly, the order of meal serving starts from the oldest or the most honored guest on the table, and continue downwards after that. Wait according to your status, and do not start until the host starts eating and give the guests permission to eat.

When it is time to eat, do not stuff yourself too much on one course, as there are usually multiple courses and all guests are expected to at least taste all of them. Use the bread to mop up any excess gravy (if any), but do not completely clean your plate. Cleaning the plate is considered a polite gesture in some parts of the West, but in Russia it (crudely) suggests that the host did not give you a sufficient amount of food.

Some might say that the social aspect of a meal is almost as important as the meal itself, as everyone will be expected to socialize after the meal. It is recommended not to make any plans for after the dinner ends, as everyone will be expected to stay for two hours minimum, or even more if there is a guest of honor. With a guest of honor, the other guests can only leave after they leave, which can reach quite a long while as the host/hostess tries to make the guest stay as hard as they can, meaning longer stay. If you are the guest of honor, be considerate to the other guests and try to leave at a reasonable time so they do not have to stay too long.

If you like this article, check out our other articles such as 5 Etiquette in Russia, 5 Interesting Facts about Vodka, History of the Russian Theatre, and Get Closer to Russian Language with Music.