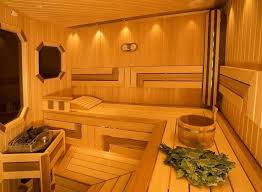 Banya, meaning sauna or steam bath, is one of the oldest tradition in Russia, dating back to several centuries. Banya is not only a place for relaxation, but it is also believed that the warm atmosphere of the banya brings people closer together, which is why it is a common destination for a group of friends to hang out in or for strangers to bond with each other in the “predbannik” – предбанник (room for undressing in the bath). The banya is old enough to have many proverbs about it. One of them, “Баня – мать вторая – Banya – Mat’ vtaraya” literally means “The banya is like a second mother”. From the History of Matryoshka article, which delved into the cultural importance of mothers in Russian culture, it is clear how much banya is valued in Russia.

In the ancient times, people believed that bathing in the banya is a way to ward off evil and illness, and to ensure purity of women. This tradition is so deeply integrated in the past, to the point that not bathing in a banya at least three times a week is considered a valid reason to believe someone has a foreign origin. In the Russian villages, bathes are done in a communal bathhouse, usually miles away from the village, where they cleanse themselves from negative energy. Banya were considered “people’s first doctor”, with the second and third doctor being vodka and raw garlic.

The reason for this distance is due to the belief that bathhouses were a place for demons and sprites, and thus it was unsafe to visit alone. One legend even says that the bathhouses were home for the bannik, one of the most hostile local spirit in the Russian folklore with the appearance of a little old man. Only certain times were safe, and after dark no peasant dares to approach the bathhouse as it is time for the devils to bathe. Sites where bathhouses once stood were considered evil and unclean, and left as no one dares to tread or build a house there.

For the nobles, they had their own bathhouses. But as the commoners, both men and women alike, frolick and beat one another while rolling in the snow, the bathhouses were considered a barbaric remain of ancient Russia, and the sentiment came to its peak when Peter the Great attempted to close all banya, while replace them with western style baths, and impose heavy taxes on the nobles with bathhouses. In spite of the restrictions, however, noblemen and commoners alike continue to prefer the traditional bathhouses, and in the end of the 19th century, almost all palaces in St. Petersburg have a bathhouse.

In addition, banya were also used to bathe women before marriage to ensure the bride’s purity. In the eve of her wedding day, the bride is bathed by her bridesmaids. Meanwhile, in some places, it is customary for both the bride and groom to bathe together before their wedding night, a tradition practiced both by peasants and nobles alike in the late 17th century. Other places have a tradition called “Clean Monday”, where the family clean their house, throw away unholy and rotten food, and wash the floors before going to the bathhouse together.

First, make sure that you are not too stuffed or inebriated before going to banya. The combination of alcohol and heat will put heavy strain on the heart, and the heat of banya draws most of the blood from the internal organs rush towards the skin, increasing the chance of indigestion. Remember to take your swimsuit, bath supplies, slippers, and a venik. Venik is a bundle of either oak or birch leafy twigs and branches. Some call the venik a bath-broom.

Prepare the venik by placing it in hot water, and wait for it to soften by taking your first round in the steam room. Leave the room when you feel too hot, and take a cold shower. For hotter temperature, feel free to go higher, and stay in the lower benches for a more moderate temperature. After ten to twenty minutes, the venik should be ready. Ask a friend to massage you with the venik, or use the service of a banschik. Massaging a friend with the venik is believed to be a good bonding session.

In the present day, it is believed that the atmosphere of banya is filled with positive energy, facilitating bonds between friends and strangers alike. Two strangers chat in the predbannik, the room outside the steam room, and share their ideas and thoughts while sitting over a cup of hot tea.

For the medical benefits, banya has the benefit of cleansing the skin, making it soft and healthy. Bathing in banya also helps expel toxins from the body, reduce weight, and get rid of sickness, to the point that overweight women are reccommended to visit one at least once a week. There is a reason that one Russian proverb say “В который день паришься, тот день не старишься” (The day you spent in the banya is the day you do not age). For more proverbs, see Proverbs in Russian Language.

As one of Russia’s oldest tradition, banya has provided many benefits throughout the centuries, and it lasted through both good and bad points of European history. While some beliefs have changed as time goes by, it is clear that the bathhouse is still as highly appreciated as it was in the past.

If you find this article useful, see our other articles such as Common Greetings in Russian, 150 Words for Beginners, and Country Names in Russian Language.