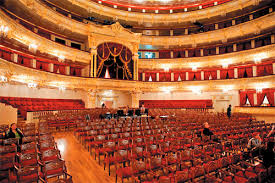 Theatres bring the stories from paper to life, allowing the expression of self in a way that entertains people and conveys a message. This art is practiced throughout the world, each affected by the country’s own culture, and Russia is no exception. In Russia the St. Petersburg and Moscow are known as cultural centres, partially from the famous theatres residing there. From this, it might be hard to believe that the art of plays was not well known until a fairly recent point in history, and harder still to know that this artistic stage play was once known as something only done by buffoons and fools to get attention and preserve Paganism.

The word ‘theatre’ even carried a classy and odd feeling until late in the 19th century, unreachable for the peasants and commoners, and odd for the aristocrats. Even with the relatively recent history, theatre remains an indispensable part of Russian culture.

The concept of theatre in Russia wasn’t known until fairly recently, and the closest thing to a theatre at that time is the performance of skomorokhi (traveling minstrels) and commonly associated with buffoons and lower classes. At that time, the performance of the skomorokhi helps preserve pagan traditions and made plays based off their fables, stories, and culture. From this, skomorokhi made the pagan tradition vehemently persistent, to the point that even the Orthodox Church had difficulties stamping them out. The church opted to make biblical plays in the churches as an alternative in the 16th century, and the pagan traditions were finally stamped out in the end of 17th century.

In 1659, the second half of the 17th century, a Russian ambassador was enamoured with the stage play in Florence, where the combination of rapid changes, props, and the actors made the whole stage came to life. After he returned home, he told the Tsar Aleskey Mikchailovitch about his experience in Florence, and suggested him to make a similar building in Russia. From this exchange, the year 1676 saw the first theatre that would stage biblical plays, called “Comedy Charomina”. German and Russian actors performed there, and this theatre marks the birth of several more private theatres.

In 1702, Peter the First ordered for a public theatre to be built in the Red Square. This theatre was relatively big for its time, and has a capacity of several hundred people, and it stages various plays either biblical or not. Finally, in 1720, an Englishman named Medox put Peter’s Theatre in the corner of Theatre Square in Moscow. From this, the theatre culture starts spreading throughout Russia, and eventually, Moscow and St. Petersburg became the center of theatre in Russia. The Maly (small) and Bolshoi (big) Theatres were built in 1825 there, to replace the burnt Peter’s Theatre.

The first known masterpieces from Russian theatre came from the brilliant playwrights Griboyedov, Gogol, and Nikolai Ostrovsky. Their plays inspired many and encouraged a new generation of actors, creating a foundation for the burst of theatre popularity in the 19th century. Music were introduced as a complement to plays. The next few years saw many theatres, including the famous Moscow Art Theatre of Konstantin Stanislavski. In the 20th century, ballet, known by many as a very rigid longstanding art, assimilated theatrical elements. Ballet started to have stories associated to it, and finally created their full artistic expression from Diaghilev’s ‘Ballets Russes’ in 1907.

However, everything changed when the Soviet came to power. All forms of art were restricted, and only those that glorifies the Soviet can be displayed, including theatre. As a result, creativity was suppressed. In spite of this, the 15 years of dictatorship saw the birth of some great playwrights such as Mikhail Bulgakov, V. Vishnevsky, V. Ivanov and N. Pogodin. This kept the Russian theatre culture from completely disappearing under the oppression, even as smaller theatres such as Meyerkhold’s Theatre and Tairov’s Chamber Theatre became a target due to their innovative approaches.

When the Soviet fell, the revival of Russian theatre starts with ballet, but it is not too known in the eyes of public until drama theatre became widespread, at which point innovative theatres came back to life and became far more available to people from different social classes. Social theatres were build around this time period.

Nowadays, even though limited by the demands of the customers, theatres enjoy a degree of creativity without the threat of persecution.