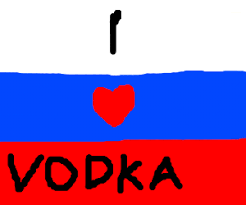 The connection between Russia and vodka is almost negatively stereotypical, with many people thinking of the clear alcoholic drink the moment Russia crosses their minds. However, there are reasons why this stereotype persists, some can be seen in the article Facts about Vodka  For foreigners, the love for alcohol in Russia can be shocking.

We are talking about a country known for drinking almost twice the amount of alcohol as United States, after all. Now, we are going to talk about facts pertaining to Russia’s love for this seemingly magical alcoholic drink.

1. Their alcohol tolerance is genetic

In contrast with their European and Mongolian brethren, Russian people have a different genetic code. This genetic code does not make them more inclined to drink, but it allows them to oxidize alcohol much faster than people of other races. To explain, the Mongolian people is the slowest at oxidizing alcohol and accumulating more acetalhyde (extremely toxic substance made from alcohol digestion) into their liver, and therefore gets drunk the most easily. The second is Europeans, with their moderate rate of oxidization, and the final, Russians, with the fastest oxidization rate. This is one reason why keeping up with Russian people when it comes to drinking is hard for foreigners, as they have a disadvantage in the form of genetic difference.

However, this faster accumulation is not all good. It means the poison is accumulated faster, and the liver will have to neutralize a greater amount of poison at one time, straining the liver and increasing the risk of damage. This is the main reason why Russian men have a short life expectation – alcohol addiction and poisoning.

2 Vladimir the Great rejected religions due to its vodka restriction

According to history, in the year 987, Vladimir sent envoys to learn more about religions around Russia, after some religious ambassadors from around them urge him to embrace their respective faiths. The three ambassadors respectively promote Islam, Christian, and Jewish. The result was described by the chronicler Nestor. The first envoy reported that there is a taboo in Islam that forbids pork and alcoholic drinks. Knowing how the rule would interfere against Russian culture, he rejected the religion, and Jewish religion was rejected due to a similar reason. This event was documented in Ukranian and Russian histories.

The visit to German to learn more about Christians almost yielded the same result, with the rejection of Eastern Rite Christian and Latin Rite Christian. At the end, he settled on Eastern Orthodox Christian, as he was enamored with the beautiful rituals, the lack of alcohol restriction, and the appealing prospect of connection with Byzantine empire at that time.

3. Georgy Zhukov smuggled Coca-Cola by disguising it as vodka

At that time, tensions between America and Russia were great, and even Coca-Cola was seen as a symbol of American Imperialism. The marshal Georgy Zhukov fell in love with the drink, but being seen drinking it is not culturally acceptable due to his position and the country’s state at that time. His love for Coca-Cola inspired him to make an odd request – transparent Coca-Cola.

George asked his subordinates to contact the President Harry Truman, who in turn contacted the Coca-Cola Export Corporation chairman, James Farley. James then asked the technical supervisor of Coke to hire chemists who are able to remove the highly iconic brown color of Cola. Eventually, they found a way, and bottles of transparent Cola was shipped. The drink was packaged in transparent glass bottles capped with a white cork and a red star, making it almost indistinguishable from vodka save for its slight, easily overlooked caramel tinge.

During times of monetary crisis, vodka can be used as substitute for money. There are times when teachers have to be paid with vodka, as the higher-ups have no way to pay their remuneration. For example, in 1998, western Siberian teachers have to be paid with 15 bottles of vodka. There are offers to pay the teachers with clothing items, funeral accessories, and even toilet paper, but they were met with rejection as vodka can easily be sold in local markets while others are harder to sell. This system helped reduce the 54 million rubles (about 3.4m USD) debt owed to more than 8000 teachers.

Russia is famous for its bitter cold in winter, and the coldest place in the world barring the North and South Pole is located in Oymyakon, Russia. Vodka warms up the body and helps to survive the cold by increasing the blood flow and ‘fooling’ the skin with a warm sensation that helps alleviate the cold from the skin. To combat the cold, even a temporary feeling of warmth goes a long way, and this contributes to Russia’s love for vodka.