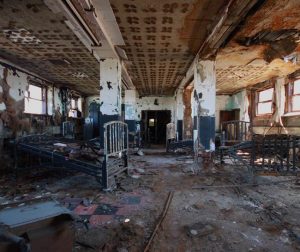 Having such a largest country which consist of crowded and modern regions of Moscow and St. Petersburg and the silent far away regions of Yakutia and Siberia, Russia incorporates a vast range of land-forms and spans a total of 11 time zones. It shares land borders with countries like Estonia, Finland, Norway, and Poland etc.

However, apart from the ancient museums and lovely Russians, the country is still leaving the worldwide curiosity with its inhabited land and the mysterious story of the paranormal activity that will scare you to the max. Even its getting worse after the World War, when the region is getting severe damage and the building is abandoned by the people. That what makes the places become creepier.

The fact that Russia is an incredibly wonderful country with beautiful churches and delicious cuisine is indeed so true, but when it comes to horror paranormal places, it would definitely make you feel goosebumps. The feeling of when you watch the terrifying creepy moments from the horror movies, since this article will give the lists of paranormal places in Russia for you to visit, -only for the brave one. From Stalin’s country house to the Diamond mine in Yakutia, there are so many paranormal places in Russia that you can visit to rise up your adrenaline:

This paranormal place is located in Mirny, Republic of Sakha, Yakutia. It is about 3800 miles from Moscow. This place is famous as the Russian’s Death Valley, because of the ancient tales told by the locals about paranormal activity in that place. It was told that in the 19th century, the locals encountered with giant people, who were one-eyed and clad in metal, sleeping underneath the cauldrons.

The location of Russian Death Valley is exactly in the rivers called Olguydach, which means a place with cauldrons, a huge cauldrons deep buried in the earth, with edges as sharp as razors and is made from a red metal. The upper part of the cauldrons stuck out of the ground, and in that spot, it is said that those who spent a night under the mysterious part would felt dizzy, ill and weak when they woke up. If you are brave enough, you can try to visit this paranormal place and proof about the legend, whether it is real or not.

This creepy hospital is located in the Vladimir Region, approximately 186 km from Moscow. The building was built at the end of 18th century, at first it was functioned as a general district hospital dedicated for the patriotic war armies against the French troops of Napoleon which was occurred in 1812. It then change function became maternity hospital around the second half of the 20th century and unfortunately was closed for reconstruction in 2009. After the longtime of reconstruction, somehow because of the lack of budget, it then stopped and unfortunately became abandoned building.

This place really suit with paranormal place category since the building is scary from the outside and entering it would become creepiest experience looked from its corridors and the chambers which look like a set of horror movie.

This diamond mine belongs to one of of the largest holes in the world that people ever made. It is located in Mirny, eastern Siberia. It was first operated in 1957, when the Siberian winter reached its harsh worst conditions. And continue to produce the large amount of the precious Russian diamonds, this condition is surely become the source of revenue for the citizen of the city surrounding. But unfortunately, due to some reason, this mine was permanently closed in 2004.

Although this site is closed, there is a mystery it that makes people curious and wants to visit this as their paranormal destination. Especially if you are mystery enthusiastic, you would find it challenging as if the Russian version of the famous Bermuda Triangle story, when every helicopter that flew above this hole got sucked into it. Well, if you are brave, visit this strange diamond mine and discover the mystery of the place.

Those who have strong guts and paranormal seekers often come to this place since this place is famous in entire Russia since 1980s year. This is located in Krasnoyarsk Region, almost 2300 miles from Moscow.

Famous with the legend ancient story told by the locals, that is about the strange particular land area, a vast empty field with black soil, which is covered with the dead body of wild animals, birds, cattle and cows. There is almost no grass and plants in that area, and the people who come near the place would experience pain in the head, teeth and stomach. Even the devices such as radio, compass, watches stopped functioning. This has made the scientist hard to explore and do the research in that strange place.

5. The Kusovnikov House in Moscow

Located on the Myasnitskaya Street in the Central Moscow, this 19th century house was a home of the rich Russian couple named Pyotr and Sofya who were extremely greedy. Being so greedy about their wealth, they used to hide their money in different and unusual places of their house. They applied this trick so that nobody can steal their money but at one unfortunate night, they experienced the accident that made their lives over. It was the caretaker who accidentally burned their hidden money in the fireplace and they died on the spot due to the shock, not because of burning.

Since that accident, people have witnessed the ghost of an old humped man, considered as Pyotr Kusovnikov who mourns the loss of his money on a nearby street. So, if you are going to take a night walk on this street, prepare your mental since you might suddenly bumped into Mr. Pyotr the mysterious ghost.