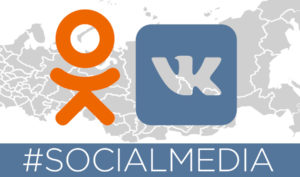 Here are we talk about the most used social media in Russia. Not different with the other countries, the Russian community is also a part of the netizens, in which every activity of the citizen can not be separated from social media. Russia with 146 million citizen is one of the largest market for social media providers in the world, 85 million people are internet users.

From the side of internet users, In Russia growth every year, a lot of facility provide by government, there is also a free internet network in various stations, this spur usage and made industry one of the highly developed social media in this country.

But the difference is that Twitter, Facebook, YouTube and Instagram dominate as social media in various countries in the world currently, but Russia and the surrounding area (Ukraine and Kazakhstan) tend to use local platform for this.

VKontakte is a friendship site like Facebook. As if we know that Facebook is very popular in the world, but in Russia is different, Russian people are more likely to use VKontakte or commonly abbreviated VK. The basic function of this friendship site similar with Facebook, but there are more advantages on VKontakte, such as friendship site users can work to listen to music, watch videos, streaming online and even function for users to do job search.

VKontakte’s friendship site is the subsidiary of the company Mail.Ru Group,  Pavel Durov initiated this company. The launching of  VKontakte friendship was on 2006, globally is currently the fifth most populous in the world.

Now, It is known that the VKontakte or VK friendship site is popular for users aged 18-34, in Russia, the older social media users are more likely to use an OK site, previously named Odnoklassniki or (which means classmate).

OK.ru or dnoklassniki is a social networking service that is for users of classmates and old friends. OK.ru build by Albert Popkov slid on March 4, 2006. Until now the OK.ru website is known to have recorded 200 million user accounts. There is an age limit for users to create an account for at least seven years.

Basic function site OK.ru one of which where users can create profiles, update status, share pictures, find friends. One of OK.ru’s goals is that users can connect with old friends who lost contacts and friends.

In Russia, for searches on any information such as exchange rates, weather, movies or other news people use YANDEX search engine. Before, Yandex Company started around in the 80s, when programmer Arkady Volozh started the company under the name CompTek. At the time Arkady Volozh interested in the data processing algorithm. Then create an algorithm that makes it possible to find a large variety of information based on the morphology of the writing language. Arkady Volozh and Ilya Segalovich estrablished YANDEX search engine and the launching was on September 23, 1997 in Moscow.

In addition to these services Yandex provide service to allow users to edit the map, the name of service is Yandex.National Card, that was released on April 8, 2010. And there is also a jamming service, Yandex.Probki launched May 30, 2006.

Email Mail.ru is an email platform base in Russia, which resembles yahoo.mail and gmail. Russia more entrust their email manager to Mail.ru domain. In addition to serving as an email service provider, inside Mail.ru also has additional attractive features such as friendship sites like Odnoklassniki and Moi Mir and online games

Today many e-mails come in and out in everyday life. To simplify the management then we tend to use free email portals from famous providers such as yahoo to google. Uniquely people.

This site is new because it was born from the hard work of Dmitry Grishin and Yuri Milner in 1999. Listed as the 6th most popular site in Russia. Mail.ru also has a wide range of active users ranging from Kazakhstan to Germany. In its development this site now also began to actively move in the e-commerce sector.

Moi Mir platform is the same communication platform as Google + ,. It is part of the extension of mail.ru’s mail platform providers. Mir Mo itself currently there are 16.6 million more people use it per month. User use for various purposes such as sharing music, videos, and pictures, looking for new friends and for games.

Just as the google + feature on Moi Mir also emphasizes the user to get a stunning experience in integrated betweets, and also become part of mail.ru account usage