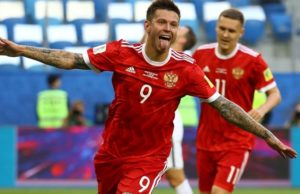 Before World Cup , Have you ever know about history of football in Russia ? This country is in hot-list in 2018 for hosting the FIFA World Cup 2018. We will take you to the story of the Russian football. Russia is well known for its Kremlin, beautiful Saints Petersburg, and the Mr.Vladimir Putin, one of the most well known man in Russia.

To enrich your knowledge about this country, here are the 7 facts about Football in Russia.

1. It was started from Britain

The football was entered the Russian land by the Britanian. It was all start by British workers who worked in Saint Petersburg in  1897. Felt homesick , they waited for the ship crew just to play football. Remember, football cannot be played with just one or two person.  All they want to do were just play and play the football. And when they played the football, they started to growing reputation for the sport. So that’s the beginning of the story where British brought the football to locals.

2. Doubtful from the beginning

Story of football in Russia was not as smooth like England. Form the past, this popular sports was acclaimed with “ bourgeois” sports, the sport was suspiciously could harmful the country. It was Arthur MacPherson, the Scotsman who transformed football from nothing into a national sport.

In 1901, Saint Petersburg Football Leauge was established, becoming one of the founding members of the All Russian Football Association . 1912, the All-Russian Football Association joined FIFA. At this time, Saint Peterburg hosted the first football championship , followin by national championships and the Russian Empire in 1912. It start the beginning era of the Russian Professional football.

The World war 1 was the nightmare for the Russia’s football history, many famous players of the Russian were killed before or after the war. It forced Russian football to halt the development of the football.

In the pre-Revolutionary era, many factories formed the teams to playing football. Not only for their health, one of the main reason for these was to prevent their workers by drinking vodka on weekends. Not all people in Russia loves the idea of bringing the British sport in theri land, and one of them was Orthodox Church. Feeling suspicious by the tragic event from the past, they feel it would possible to harming the locals. And of their concern was the man who have to run in shorts.

Arthur MacPherson, the man who became the founder and the president of the All-Russian Football Union from 1912 – 1913, was arrested in 1917, and two years later his body was found under the pile of 40 others in Moscow prison. Today, The Russian President, Mr.Vladimir Putin has raised a glass to his cemetery to honour a man who brought football to Russia only to be arrested by the Bolshevik secret police and left to die in a grimy Moscow Prison.

After the world war, the situation in Russia become cooler than before and they have to start the things from the beginning again. The government disbanded the football club and started the competition at all levels with the team formed by the government and from factories. Spartak, Zenit, Dynamo, and CSKA were the new -era football club who were the sign of glorious for the nation.

I am really happy when I wrote this. One of the 7 facts about Russia in football. The 1950 and 1960 was a star for the Russia. Everythings went well for the country and they produce the best talent at their era. At the time, they have the best football players all the time for Russia like Lev Yashin, the best goalkeeper all the time, Igor Netto, Valentin Ivanov and Victor Pnedelnik propelled the Soviet Union to glory in 1960, when the national team won the Inaugural European Championships. This period is rightfully regarded as the Golden Age of Soviet football.

Lev Yashin itself was one of the best goalkeeper I’d ever seen. He was well known with his black gloves, named the black spider for their rival, got respected both team mate and the rival. Until now, for honor Yasin , each year FIFA held the Lev Yashin award, the award for the best goalkeeper in the world.

4. Supported by the Billionaire people.

Russia have  a good amount of people who rich enough to spend and buy anything they want. Buying real estate, cars, exotic animals, or even the club of football. Yes they did it. With the power of money, they can do anything for fulfil what they want.

The Russia have many people who billionaire, yet have time to think where their should spent the money. The most recognable was the Mr.Roman Abramovich, who’s the one of the billionaire in Russia, supported by the oil company. He is the Chelsea owner, one of the top 4 club in Barclays Premiere League in British nation. If you have too many money , you need to invest in football club. And that’s how Russian billionaire thinks if they had. Beside Chelsea, Roman Abramovich had a deal to sponsorship  in 2004 for CSKA Moscow. For Russian, Chelsea is like “their”, and when Chelsea wins, they feel happy because there are feel like Russians “football club” who support the club for the win.

Our latest tradition for the Russia world class player  is Igor Akinfeev. He is the captain both for CSKA Moscow and the Russian national football team. Started as the underdog, he led the tournament as their lowest ranking team. Since the end of the Soviet Union era, the record was not good : failed to qualify for three out of the six tournamnets since 1991, and not made it out of the group stages when they have appeared.  They had a good story when 1991, the higest achievement they ever made, semi-final and three quarter-finals.

Today , after the World Cup 2018, nobody expected this country will go through like this. They qualified from the knockout group, beat the Spain for the sudden death penalty round, and make the pride for their people. They had a good quality for playing at the highest level of football and prove that collective and team work strategy would beat the nation who crowd with star player.

Sergei Bondanrenko, football historian at Memorial NGO, told that Russia would fallen in two ways, and one of them is a limit of a number of foreign players allowed in domestic league which started with every team being allowed a maximum of seven players outside from the country, and was lowered to six in 2015. Bondanrenko told the Russia will rise if the government change the plan and let the more Russian in the pitch rather than the foreigner. There will be no players like Andrey Arshavin, or Igor Akinfeev anymore. The Russian need to take this situation as important things, so maybe one day There will be player in Russia who got the Baloon D’Or.

Bondanrenko still told that corruption was the main problem in Russia.if you have good connection to the man with power, you are good. That’s make the negative atmosphere at the moment, and the tournament wont start pure with the professionalism and start to rust the nation. We do believe with a good communication both the government and the club, this nation would different.

So that’s the 7 facts about football in Russia. Hope you enjoy with my article. If you have some interest about Russia, don’t forget to search another good content in this website. Enjoy and see you again!