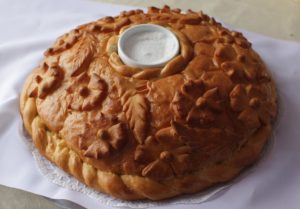 When we talk about country, race, and nation, it always related to tradition. Tradition also closely related to many things, such clothes, homes, ceremony, ways of eating, and so on. For example, read the tradition of New Year tradition and Christmas tradition in Russia.

Here, we will focus on food. Why? We may find a unique from a country by its food.

Especially food for example, talking about Indonesia, it has its own food traditional, such Gudeg from Jogja, Empek – empek from Palembang, and a lot of others. It has history and story stick on it. We may say it as they have own definition and tradition, but it wouldn’t discuss here.

We move to a big country far from Indonesia, Russia, also has tradition of food. For example Bread. For us, Indonesian people, Bread is like only a snack, but different for Russian, Bread in Russian Culture has its history and meaning. Just like Easter egg, bread also has place in every heart of Russian People.

Bread reminds us to the history of Russia. Why? Because Bread also write the history of Russia. Do you know that Russian people give special place on people’s table? If you answer Bread, that is the correct answer. For your information, Bread is not only a kind food for Russian people, but it has a sacred meaning. Bread become part of Russian life or you may probably say that impossible to life in Russia without bread.

What does bread means for Russians? Bread in Russian Culture symbolizes abandon and wealth. Or we can say, no food or others thing is important as bread. And, Russian actually has national Russian bread; called as black and sour rye bread. Russian black bread has meaning as the different between starvation and life.

The important of bread for Russian, also, we can look at the sayings of Bread. There are a lot of sayings about bread in Russia, such as ‘porridge is our mother; bread is our father’, bread is a head of everything’, without a piece of bread it’s a grief everywhere’, it’s very bad to put bread to the trash or to play with a bread’, and a lot of others.

Why bread is so important? The answer is, the bread was born in the times when the blockade of Leningrad. In that old time, people don’t gave enough food. Then, by little piece of bread, it could save the life. And, it is the reason why people respect to bread and bread has special place in their heart.

Another reason why Russian people respect to bread is manifested on an old Russian saying. The old Russian saying warns that when we die, “all the bread we have ever waster will be weighted; if it turns out to be more than the weight of our body, we will go to hell”.

One of Russian tradition is serving bread to every meal, most often is black bread. The bread is made of rye and has pleasant taste. The meaning of bread in Russian culture were abandoned and wealth, meanwhile salt means protection of evil forces. It has believed by people since the ancient time.

The tradition of Bread and Salt appeared in Russia long time ago or this custom is very old. In the “Domostry”, written source, explained, the custom is presented during celebratory event and mourning. For Russian people in the Middle Ages, Bread and Salt also symbolized as peace when the enemies shared Bread and Salt, or means as they would become close friend.

Now in modern Russia, the Bread and Salt represent respect and hospitality toward guests.

Today, bread and salt also presented when important, respected, or admired guests arrive. It is similar to dayaknese traditional welcome in Kalimantan, potong pantan, Russian people symbolize the bread and salt as ceremonial welcome and is one of the oldest Russian traditions.

What does the bread and salt ritual means at wedding? It symbolizes as they will take care of each other ever after

As the rule, most couples of Russian live separately from their parents. They move in to life after official marriage ceremony or wedding

Bread also served in the funeral ceremony, such as state funerals of the most senior political and military leaders. Yeast Karavai, a variety of Russian bread that is usually served in funeral and weddings. The bread means a great pity due to decorated with sculptured and baked flowers, as well as branch woods and swags. And it also contains numerous ritual symbols.

In sum, bread has a special place in the heart of Russian people. Bread is a symbol of abandoned, wealth, and hospitality. They may not life without bread. Bread and salt tradition has started a long time ago but they keep continue the tradition. Today, bread and salt is used in ceremonial welcome, wedding party, and funeral ceremony. If you such important, respected, and admired guest, they will serve you with bread and salt as well.