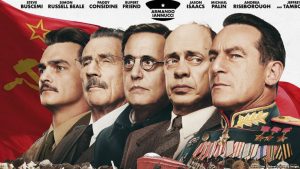 It’s no secret that censorship is a must in Russia. Everything must go through Russia’s Ministry of Culture before it’s deemed appropriate for public. This also applies to movies.

The heavy censorship doesn’t discourage some people to suppress their creativity, however. Hence this is why Russian directors still dare to produce pieces that go astray from the mainstream. Sometimes their movies not only causing the officials to ban them but often they also caused a stir among public itself.

Let’s check out some titles:

Andrei Rublev (1966) is a movie about a famous painter in medieval Russia with the same name. It was loosely inspired by his life. Since it’s only loosely inspired, this movie wasn’t deemed historically accurate. For this reason, the Soviet state didn’t allow its distribution to the public audience.

There are other Soviet historical movies if you want to watch them.

The 2014 movie Leviathan was crowned many awards from abroad. Golden Globe, Academy Awards, and many more awards to show how brilliant this movie is. However, many Russian resent it. It’s because the fact that the movie won for it’s almost realistic portrayal of a Russian small town.

There are a corrupt mayor and an average man who fought the system against all odds. There are also so many vodkas in this movie. Basically, the movie tells how corrupt and full of problem Russia is. The fact that those western people gave the movie awards for it is insulting. It’s like people give you a prize for you being bad.

Matilda tells a story about the love affair between Tsar Nikolas I and Matilda Kshesinskaya. On why this movie become a controversy in its country, first, the historical distortion the Russian people sure the movie is portraying. It contains some inappropriate scene, insults religious entity, and according to Russian, what exactly the western audience would hope on a movie about Russia: All things bad about it.

Instead of touring around Europe, a Russian female singer opera decided to go back to her hometown for one last goodbye. She brought her son with her. Her fate changed when her son disappeared one day. That changed the course of her life completely. She began lost something else too, her voice, her identity as a famous singer, and transformed into another person.

The movie is not censored by the state, but it angered the Russian public for its banality and spiritual impoverishment. It managed to capture both poetic Russia and the tragic one. Thus it got a mixed review from many people. Overseas, the drama is very much praised.

The movie Cargo 200 is hard to watch even for people who are trying to be open-minded with an unusual movie. The character is psychotic and throughout the movie, his actions were unbelievably sick. Not only that this movie invokes rage among the audience, many actors even refused to work with the director.

Dau is a longtime cinematic project of Russian director Ilya Khrzhanovsky. Taking years to make alone, this movie is about the life of the Russian Nobel Prize winner Lev Landau. The movie covers 30 years of Soviet history. It’s shot in a gigantic set the crew calls “the institute”.

It’s one of the strangest movie production not only in Russia but also in Europe. It was meant as an artsy movie. It’s shot for 700 hours involving real actors acting and living 24 hours on the set as if it were in the 1950s. The scale and ambition was a whole new level. This movie was purely meant more as an art than for commercial gain.

These movies also considered controversial although they’re not necessarily Russian-made. If you see closely, one of the common characteristics they have is these movies depict Russia, not in the country’s favor.

The Death of Stalin (2017) is originally approved to be screened in all major cinemas in Russia. However, two days before the date, Russia’s Ministry of Culture decided this movie is a no-go. Hence until now, the film never released. The reason? A classic “inaccurate depiction of history”.

Tangerine is a thought-provoking movie about war and peace. It’s heartbreaking as well as tragic, and make the audience think more about whether a war is truly worth it. It’s a Georgian movie, set during the war in Abkhazia in the early 90s. During this war, Russia was the bad guy, as was depicted in the movie.

This probably led the decision to not allow the distribution of this movie in Russia. It’s unfortunate since not only that this movie won Oscar and Golden Globe for its cinematic brilliance, but it also carries a good message about humanity.

Blue is the Warmest Colour explores the relationship between two French young women. Russia is still quite conservative on same-sex relationship, hence that’s why this film is considered controversial in the country. This movie also contains a 7-minute long sex scene that certainly doesn’t help the movie making a good impression for the censorship official. To make matter worse, the characters were underage too.

The hilarious Borat does contain inappropriate jokes, not for the taste of everyone. Russia included, in solidarity to its Soviet state Kazakhstan, they decided to bab the movie from the country. The reason is that the movie Borat did nothing but sending Kazakhstan’s reputation down the drain. Well, sometimes a movie can be too much.

Another movie that’s deemed distorting history and facts by Russia’s State Committee for Cinematography. Child 44 is made by Hollywood. It takes the set of 1952, during the era of Stalin. The story is fictions but that doesn’t stop the official to mark this movie greatly misleading, especially about WWII.