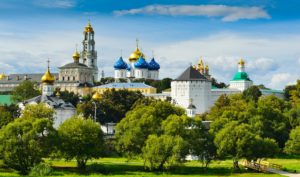 Couple days ago, the 2018 World Cup has just ended. The France national football team has come out to be a champion after defeating Croatia in the final. It leaves some feeling behind; joy, sadness. anger, pride, regret, happiness. That means what a great tournament they presented. However, It is not only the tournament that keeps in the heart of the spectators from all around the world who came to Russia.

There are also things that still remain in their heart after the tournamen ended. One of those things is attractive venue. As a host of one of the most prestigious events in the world, Russia has to granted their guests a warm welcome and enjoyment during the World Cup. As a result, there are many venues was built to attract the visitors. Here, we have listed 10 most attractive venues during World Cup 2018 in Russia.

Golden Ring is one of the popular attraction in Russia during world cup 2018. This venue is located on the north-east of Moscow. It offers visitors oldest art from the country. There are still many old buildings stood in this region such as white stone churches, monasteries, and fortresses. Besides, it also offers traditional food and nature straight from Russian fairy tales. So, For visitors who like to experience and enjoy the historical place, this venue is a must to visit.

Moscow has been the most popular city in Russia as it is the capital city of Russia. Most visitors who visit Russia make this city as one of the first list places need to visit in Russia. Well, It’s because this city offers beauty of history, culture and modern-era. There are still statues from Soviet era. The Kremlin and Red Square are sights that should not be missed as well as the statues of Lenin and Stalin. Then, It has world-famous museums and art galleries such as the Pushkin State Museum of Fine Art. Besides, The visitors are able to please their mouth and stomach since Moscow has mouthwatering cuisine, too.

Beside artificial beauty, Russia also has amazing natural sights. One of those is Lake Baikal which is also known as ‘Siberian Sea’. This lake is located on the south part of Siberia. It offers a beautiful natural view with soaring mountains on its sides and sparkling water and also various species lived there. It’s said that Lake Baikal holds 20% of the world’s fresh water. Moreover, this venue is also know to the world as the deepest and oldest lake in the world. So if you want to enjoy the quite side of Russia, Lake Baikal is perfect.

Karelia is known as one of the Russia’s most beautiful places. It is located in the north-west Russia, 400 km from St. Petersburg. This place offers beautiful nature with lake, water falls and tress on big rocks. There is also another attractive place in Karelia, Ruskeala Mountain Park which has a marble canyon. Here, You can go diving, hiking or renting boats. You also can enjoy ‘white night’ in summer since it has light show on the lake.

Novgorod was one of the cities hosted 2018 FIFA World Cup in Russia. However, this is not the only one made this city worth to visit. Novgorod is a historic city called as “the birthplace of Russia”. No wonder, It makes it one of the most important city in the country. There are some attractive historic building which are worth to visit. The first one is the museum of Vitoslavlitsi which has a wooden architecture. Then, There is Russian Izba, an open-air exhibition. And don’t forget to put this on your list, The Kremlin Fortress which is one of the oldest in Russia, dating back to 11th century.

Kamchatka is located in the far east of Russia. Why is this one included in the list of 10 most attractive venues during World Cup 2018 in Russia? Well, Kamchatka is more than just a destination. It is vast volcanic peninsula which is one of the world’s most dramatic and rugged sights. This is a new trend of ecotourism. It offers various activities from mountain hiking, kayaking to fishing and hunting trips. Its hot spring, wild animals , and snow-capped volcanoes are unforgettable. Then, this city is also known for its mouthwatering seafood.

The city of Kazan is well-known as Russia’ sport capital for it hosts many athletic events including Wold Cup 2018. However, this city is more than that. It is one of the oldest city in Russia, over a thousand years old. This city gives wonderful sight of diverse art and cultural scene, balancing between Russian orthodox and muslim culture with churches and cathedrals neighbouring mosques. There is also Soyembika Tower which is a must-visit. It is a landmark of the city and had been a UNESCO World Heritage Site in 2000. Beside, this city also has  typical culinaries which is worth to try. Those are a mix of Russian and Tartar, chuk-chuk, and a sweet pastry dish.

Yessentuki is likely known for some people since its name can be seen on the shelves of Russian grocery stores around the world. This city is located in Stavropol Krai, Russia. It is also well-known for it is one of the historical resort town in Russia. This venue is famous for its mineral and hot spring and a destination for the health-conscious. Besides Yessentuki also has some old architectural monuments. The oldest one is known as the Wooden St. Nicholas’ Church.

Next attractive venue is Vladivostok which was founded in the 19th century. This city is amazing. It is a cannot be missed destination for tourists who visit Russia. Some even compared this lovely city to San Francisco because of its hills waterside scene and sandy bays. Then, Its huge suspension bridge, the Eagle Nest’s Hill,  which sits over Golden Horn Bay likely contributes the most. And this place is the best  place for views. Besides, this city has a tasty food destination including good chinese food.

The last venue is Saint Petersburg. Well, though it comes last from list of 10 most attractive venues during World Cup 2018 in Russia, it is not the least of them all. Instead this one is one of the best city you need to visit when you are in Russia. Why? Well, many travelers name this city as one of the most beautiful cities in the world. Beautiful canals, bridges and Renaissance buildings all in green landscape is an amusement for the eye. There are many tourist attractions that lay in this city. One of them is the Hermitage Museum. This museum is a home for millions art from famous artists like Rembrandt, Da Vinci, and Michelangelo. Then, The Artillery museum, Combat Engineers and Signal Troops are a home for weapon from the past and today. There is also Canal Boat tour. Other attractive places to visit in St. Petersburg are Vasilevskiy Island and Andreyevskiy Cathedral. If I can say, this is the best place to visit in Russia. All is in one package, History, scenary, and culinary.

Well, that is all of the 10 most attractive venues during World Cup 2018 in Russia. Each venue has beauty and history  and they are worth to visit. I am sure enough that inspite of their teams’ loss, the spectators of 2018 World Cup who has come to Russia. It’s because they got experienced in exploring the beauty of Russia that can be brought home. So, which ones are you going to vist when you got a chance to visit Russia.