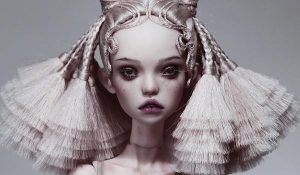 There’s no limit in creativity, in the world of toys included. Around the world, you have seen creators stretch their imagination to make an unusual toy. They’re not intended to be fun, but creepy instead. You might have heard the doll Annabelle, which inspired movie producers to make a movie with the same title. These toys made us rethink about pushing boundaries when it comes to toy design.

Russia is no exception to this. Russian culture itself is already familiar with toy making since centuries ago. One example is Russian traditional wooden toys which can move thanks to a simple but brilliant mechanic. Another example is dolls. You might have heard about the world famous Matryoshka. A toy as well as a Russian popular souvenir, Matryoshka is a nesting doll containing one big doll with several smaller figures inside.

A typical Russian doll design is represented in Matryoshka, round, and brightly colored, and fun design. Stuffed animal toys are also popular, such as teddy bears, or puppy stuffed animals. However, A group of artist tried to break this convention by creating dolls of unorthodox design. It may stray from a toy initial purpose as a source of fun, but they’re intriguing nonetheless. The dolls are depicted hyper-realistically, while some artists opt for an ethereal, otherworldly design.

These artisan dolls are exhibited at Amsterdam’s 2018 International Exhibition of Art and Dolls. (Also check other Russian events during summer) .The creator warned the audience that these dolls are not a mere toy, but high art. Russian dolls, although breaking through from traditional designs, they still incorporate some element of Russian doll making such as being handcrafted and with precision and details.

Sisters Popovy are Russian artists from the city of Perm. The siblings, Ekaterina and Elena Popovy, both are a fashion designer as well as dolls makers. They routinely create a collection of dolls each year. Don’t think about barbie like dolls, theirs are inspired by real people. So you will find dolls with imperfections on their physique.

The siblings said they don’t have an ideal type for the design of the doll. Recently they focus on flaws that are beautiful and interesting, such as uneven teeth and protruding ears. They also find inspiration from children’s faces because according to them, children showcases more emotion on their face.

On their website, you can look more at their collections. Their dolls range from non-human ethereal figures to realistic human ones. They have numerous theme as well, such as Royals, Pupa, Genesis, and Swan Lake.

You might find Michael Zajkov’s dolls eerie and uncomfortable to watch, but they are interesting to observe. Michael Zajkov inspirations come from the early 20th century. Costumes are made with silk and laces. In hindsight, it looks like a china doll. The difference is Michael Zajkov creates a doll with an almost disturbing level of realism.

Every millimeter of the dolls is hyper-realistic. They are made from polymer clay and are hand painted for the details. The glass eyes, the freckles on the dolls’ faces, their lips texture, and the dolls’ fine hair, all are made with such precision and art. The faces also show a certain emotion, as if they are little real humans.

You can head for Michael Zajkov Instagram to find out more about his work and his artistic process.

Tatyana Trifonova runs far away from the traditional concept of dolls with her own imagination. She creates dolls that a hybrid between human, especially female, and animals. One of her artwork is a combination of women and Spink cats. The result is a doll which can challenge your way of thinking. Some would find the dolls beautiful, while others can find it bizarre, it’s up to the audience perception.

On her website, she also offers other themes of dolls. There are hybrid human-bunny dolls and human-bear dolls. Animals are not only the source of inspiration, as she also took inspiration from fruits such as berries and also from flowers. You can also order a doll through her website. She even has a collection of children dolls, perfect if you want a porcelain doll looking like Annabelle.

If you’re an avid fan of Tim Burton movies, you might feel familiar when looking at Lidia Krasko’s dolls. Yes, they look like they come straight from the movie Corpse Bride. The display of raw human emotion is the general theme of Lidia Krasko’s creations. The result is dolls with otherworldly alien looks, ghostly, yet incredibly interesting.

Polina Myalovskaya signature is a doll reflecting the richness of Russian history and fashion. Polina Myalovskaya herself is an architect with side hobbies including sculpture, painting, and jewelry making. The dolls are where she channels her artistic side. Her creations also take inspiration from all over the world, such as a doll resembling a Chinese and an Indian girl.

On her official website, Polina offers dolls for sale. If you’re a fan of TV Series Game of Thrones, you might want a Daenerys doll. Created with fine details, the doll is truly made for collection. It is made of fine porcelain and painted with china paint. The costume is adorned 24k gold breastplate.

So those are the 5 eerie toys from Russia. They are not for everyone, and definitely too expensive to buy for your children. As stated earlier, the dolls are high art and more fitting on a collector selves than in your children’s toy box. Don’t worry, you can buy them dolls such Matryoshka dolls and Russian Toy Terrier.