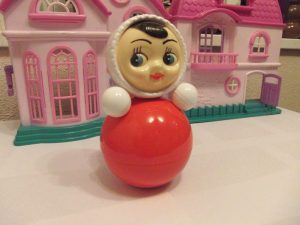 Russia has toys that will capture anyone’s heart, young or old. Not only children, but you can also purchase one for your own amusement. Russia has some unique toys, from the world popular Matryoshka to the less known Nevalyashka (However, Nevalyashka is very popular in Russia especially in Soviet time).

What are those Russian toys? We have this list for inspiration. Check it out!

One of the most lovable Russian cartoon characters from an animation series with the same name. Chebruskha is a character resembling several species at once. He looks like a monkey with mouse ears. Some would call it’s the mickey mouse of Russia. Chebruskha dolls are not only popular in Russia but also in Japan. Well, it’s unsurprising since Chebruskha is a cute character.

2. Masha from cartoon Masha and The Bear

Masha and The Bear is undisputedly the most popular cartoon in Russia and its one of the Russian cartoons that have taken the world by storm. So it’s not surprising that you can find many Masha dolls not only in Russia but probably in your home country as well. Although you can get it outside Russia, the only way you can hunt the official merchandise of Masha is still in its origin country.

If you buy a Masha doll, it feels incomplete if you’re not buying Masha’s friend, The Bear. Guaranteed to be more fluffy than Masha, The Bear can be a nice companion while you sleep. Stuffed bears, in general, are also a popular toy in Russia, considering Russians are fond of the animal too. In the cartoon, The Bear is described as a big brown bear with a kind heart. Resourceful, can do anything from making a dress to juggling, and serve not only as a friend to Masha but also a father figure. It’s easy to fall in love with him.

Wooden toys are the oldest type of toys in Russia. Even though they may sound simple, wooden toys in Russia is far from that. First of all, it can move, with the help of pendulum and strings. The most popular kind are wooden bear toys, wooden pecking chicken, and wooden blacksmith.

Kaleidoscope was one of the things that made many Russians’ childhood colorful. Kaleidoscope is surprisingly popular that almost every Russian household has one. Kaleidoscope is a tube with a mirror containing colored beads. When you peek through the hole, you’ll see a symmetrical wonder inside. Nowadays, if you can get your hand on a physical Kaleidoscope, there the digital alternative, Kaleidoscope apps you can download on your phone.

Matryoshka is a wooden doll that symbolizes Russia. It’s one of the most popular Russian souvenirs out there. Russia even exports Matryoshka abroad. If you’re looking for truly legendary Russian toys, Matryoshka is the answer. Since it’s popular, it’s also easy to get Matryoshka everywhere in the country. Before buying, learn more about the history of Matryoshka.

The friend of Chebruskha, the crocodile Gena, is also a legendary cartoon character toy from Russia. Although crocodile may sound scary, Gena is actually the opposite of that. In the cartoon, Gena is a good-hearted crocodile who likes having many friends. So, make yourself one more friend of Gena by getting Gena doll.

Not only Russia, but every child in the world has also ever played with toy soldiers. However, if you’re looking for something unique (or Russian), get yourself a set of toy soldiers with Russian/Soviet theme. There is a set with World War theme, Napoleon invasion, and Battles from the era of Tsars.

For people who grew up in the 90s, they know that Gameboy is what made you cool among your friends at the time. In Russia included, Gameboy was also a popular toy among children. Many Russians apparently also love Tetris. It’s one of the popular games in Russia. Nowadays, the game boy is considered vintage. Buy one if you want a trip down sweet childhood memory lane.

There is no sort of Russian figurines, dolls, and miniatures to bring you back to that sweet childhood time. Among you can choose are miniature of little princes and princesses from a Russian folktale, the Santa of Russia, Father Frost, and the Snow Princess, miniatures of Russian popular landmarks such as the Kremlin and St. Basil Cathedral, and also miniature depicting Russian daily life.

Nevalyashka was first produced at a military plant near Moscow in 1959. It got popular instantly. Many people who grew up in the Soviet era has played with Nevalyashka. This toy is not only legendary but also memorable. The allure of Nevalyashka is its ability to stabilize buy itself. No matter how you placed the doll, it will come back to its upright position, thanks to a weight placed inside the toy.

Now that you know what to buy, the next question is where to buy them? Popular Russian toys such as Matryoshka can be easily found in any souvenir store in Russia. You may need to go to a dedicated toy store if you want to buy Masha, Nevalyashka, and Cheburskha dolls. More vintage options, such as game boy or vintage wooden toys, you might want to try your luck in a Russian flea market. Check here for the best shopping places in Russia. Happy hunting and when possible, don’t forget to find a good deal and bargain.