One of the most common misconception around the world about religion in Russia: Because of Russia’s close connection with communism (a leftover of a bygone era), people who have never learn and never go to Russia think that religion is not allowed to be practiced or talked about. They think that Russian government follows communism edict and surely prevents believers to observe their religious rituals. True or not!? 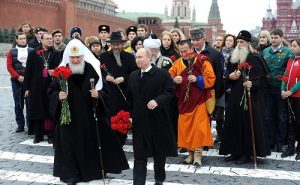 The fact is that many people in Russia nowadays are believer of a certain religion, be it Abrahamic faith or newly established beliefs like New Age movements. Although most of them may not practice their religion faithfully, but they celebrate religious holidays and recognize the doctrines. This raises an important question: Is religion a part of Russian taboo? Or is it merely a part of everyday life just like in any other countries? How come the Russian President embraces various religious leaders in state event if it is unwelcome?

First and foremost, we must understand how Russian considers religion. To do that, we have to review religion in the country through several points of view.

Historically, Russian people were particularly religious. By the end of the 18th century, two main beliefs dominated Russia. They were Slavic pantheism and Christian. Around the 19th century, esoteric thoughts and other spiritualistic movements grew and gained followers amid the rising privileges of Russian Orthodox church. Atheism and anti-theism movements only gained attention after the Russian Revolution in 1917.

During the Soviet era, religions received significant pressures. Russian Orthodox church was stripped down of its privileges, Soviet Russia celebration of Christmas at the time was almost nonexistent, and other minor religion believers have to tone down their activities. Still, even under atheist regime, census reported that 80 percent of Russian people were believers. And afterward, as the regime broke down, religions rose in prominence again.

Constitutionally, Russia now is a secular country. Secular means separating matters of religion and governance. Russia does not allow religious consideration in the establishment of legal laws, but the country also takes hands-off approach toward religious bodies such as the Church or Mosques. In this sense, Russia is quite similar to other European countries such as French, German, and Netherlands. The government will not meddle unnecessarily on matters of religion, although they will also prevent religious people to meddle in matters of governance. As long as someone does not try to intervene in political affairs and does not threaten public security, he or she is free to practice any religion.

Statistically, Russia welcomes diverse beliefs across the country. This includes Orthodox Christian that deeply entrenches in most of the area, Islam that is strongly influential in Dagestan and Chechnya, archaic faith that sees natural phenomenon as signs of higher being’s powerful intervention in worldly matters, among others. According to Russian Academy of Sciences estimates, 79 percent of Russian in 2013 are Orthodox Christians, 4 percent are Muslims, 9 percent admits spiritual leanings but without identifying any religion, and 7 percent are atheists.

With that said, can anyone say that Russian are not religious? Well, in state matters, it is indeed a taboo to quote religious preferences according to the constitution. Even then, many government bodies in Russia will invite religious leaders to bless the establishment of a new community building or pray for the success of a recently-launched program. In everyday life as well, religious activities are welcomed warmly and can be discussed freely.

When talking about Russia, usually only two religions that come to mind: Christian and Islam. However, there are actually a lot of beliefs that scatters across Russia. The biggest is indeed Christian, but it comprises of several different churches. Most Christians in Russia attend Russian Orthodox church, with fewer worshipers come from Old Believers, non-Russian Orthodox Church, Catholicism, and Protestantism.

Of non-Christian religion in Russia, the largest is Islam. Highest number of Muslim live in Chechnya, Ingushetia, Dagestan, Kabardino-Balkaria, and Tatarstan; but there are also many who stay in Karachay-Cherkessia, Bashkortostan, Yamalia, Astrakhan Oblast, Adygea, Orenburg Oblast, and Yugra. In most regions, Muslim live alongside their neighboring Christian and other religion believers in harmony.

Aside of Islam, minor beliefs in Russia includes Judaism (yes, there are around 140,000 religious Jews scatters in various region), Paganism, Shamanism, Buddhism, Hinduism, Taoism, New Age and similar modern spiritual movements. All of them are also free to practice their faith, establish their own place of worship, educate their own priests, or read their own holy book. Once, there was an attempt by a group linked to the Russian Orthodox Church to ban Bhagavad Gita in 2011, but it failed because of the strong protests from the community and Russian government views on freedom of religion.

Just like the rest of the world, Russia celebrates Christmas by gathering families, feasting together, decorating Christmas trees, and exchanging gifts with friends and relatives. There are particular popular Christmas gifts in Russia for children, and for adult too. Food is a big part of the celebration, so there are plenty popular Russian Christmas recipes that may be inherited from mothers to daughters among families.

As the second biggest religion in Russia, Islamic holidays like Eid Al-Fitr are also widely celebrated. Eid prayer in The Great Mosque of Moscow is attended by thousands worshipers. President Vladimir Putin himself sent congratulatory messages to specifically celebrate Eid Al-Fitr. Needless to say, the unpleasant rumors that Muslims are under pressures in Russia is not true.

Some traditions of Eid Al-Fitr in Russia are quite similar to Christmas, including family gathering, grand feasts, and gifts exchanges. However, the celebration is free of liquor as dictated by Islamic teachings, and include foods that come to Russia from Islamic countries. For example, Manti, a type of dumplings, is especially favored during the celebration, along with sweets that are loved by children.